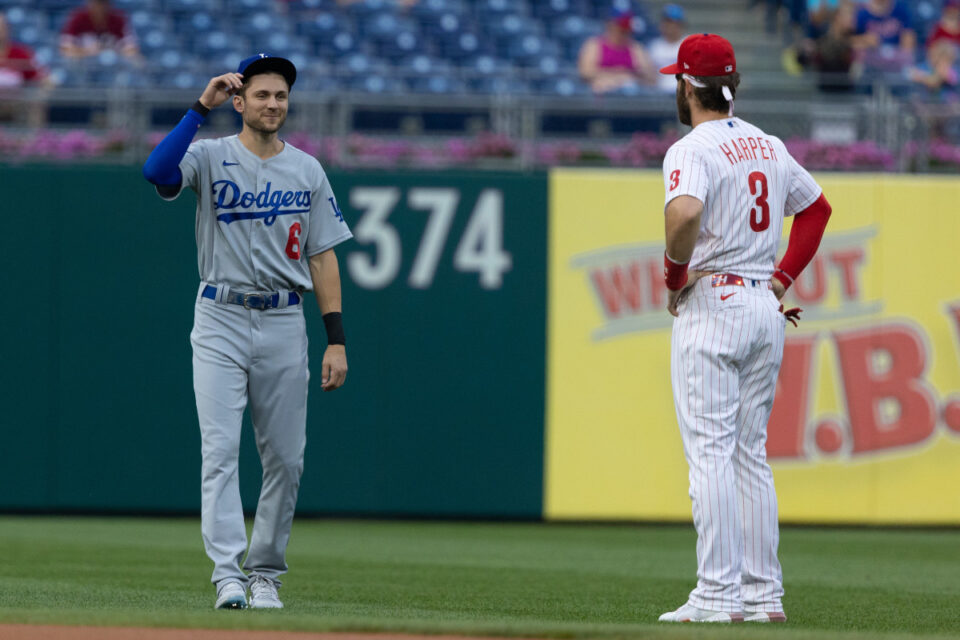 Bryce Harper knows exactly what kind of influence he has as the face of the Philadelphia Phillies franchise. He knows that both fans and ownership listen to him and respect his opinions.

That’s why he put pressure upon ownership and general manager Matt Klentak to re-sign J.T. Realmuto in 2020.

“Realmuto needs to be our catcher next year — plain and simple,” Bryce Harper said just minutes after the 2020 season ended in an article by Jim Salisbury of NBC Sports Philadelphia.

It wasn’t the first time the Phillies, Harper and Realmuto were played off one another in a bid to bring the duo together.

During the 2018 MLB All-Star game, Harper placed a Washington Nationals cap on Miami Marlin Realmuto. Noting the two players’ affinity for each other, the Phillies traded for the All-Star catcher just weeks before making their final free agent offer for Harper.

Phillies teammates Harper and Realmuto chat in the dugout.

During the winter of 2021-22, Harper expressed his admiration for free agent sluggers Kris Bryant, Nick Castellanos and Kyle Schwarber.

“There’s three guys out there that can really help us,” Harper said in an article by Scott Lauber of The Philadelphia Inquirer. “It’d definitely be a downer [if we didn’t sign one of them].”

After his comments, the Phillies only went out and signed two of the three players Harper wanted. Whether or not Harper had any impact in that is to be determined, but the fulfillment of his wishes has now become a reoccurrence.

That’s why it was so meaningful when Harper praised Trea Turner on Thursday night’s Phillies broadcast.

“Turner is my favorite player in the league, it’s not even close.”

This isn’t the first time Harper has had kind words for Turner, “I think Trea Turner is one of the most underrated players in the game,” Harper told USA Today’s Bob Nightengale in June. “He’s one of those guys that just goes under the radar.”

The two were teammates for three and a half season in Washington, from 2015-2018. Harper knows how impactful Turner can be, both on the basepaths and on  defense, as well as offensively.

Turner, who will turn 30 in 2023, is a career .850 OPS hitter and above average defender at shortstop, evidenced by 11 career defensive runs saved. He’s stolen 221 bags, only to be caught 41 times.

Free agency will see a wide variety of suitors for one of the game’s top shortstops, this Harper knows well.

“He’s one of the best shortstops in the game,” Harper continued. “I’m excited to see where he goes next year.”

He is also well aware that the Phillies have just exceeded the luxury tax, another of his off-season requests.

Already cresting that threshold, the Phillies don’t have much wiggle room, thankfully, the team’s five mega-contracts are spread out over many years. Despite agreeing to the most expensive free agent contract of all time at it’s signing, $330 million, Harper’s AAV is only $25.4 million.

With so much money coming off the books after 2022 in the form of Didi Gregorius, Jean Segura, Crey Knebel etc., the Phillies approximate payroll for 2023 is only about $164 million according to Spotrac.

That means the Phillies are free to add another $69 million in payroll before even exceeding the first luxury tax threshold, something they’ve now expressed their willingness to do.

Even if Turner requests a $30 million AAV, it’s a price John Middleton and the Phillies ownership can afford.

Panthers HC Matt Rhule on Baker Mayfield, Sam Darnold: ‘They were both in command’ in first game