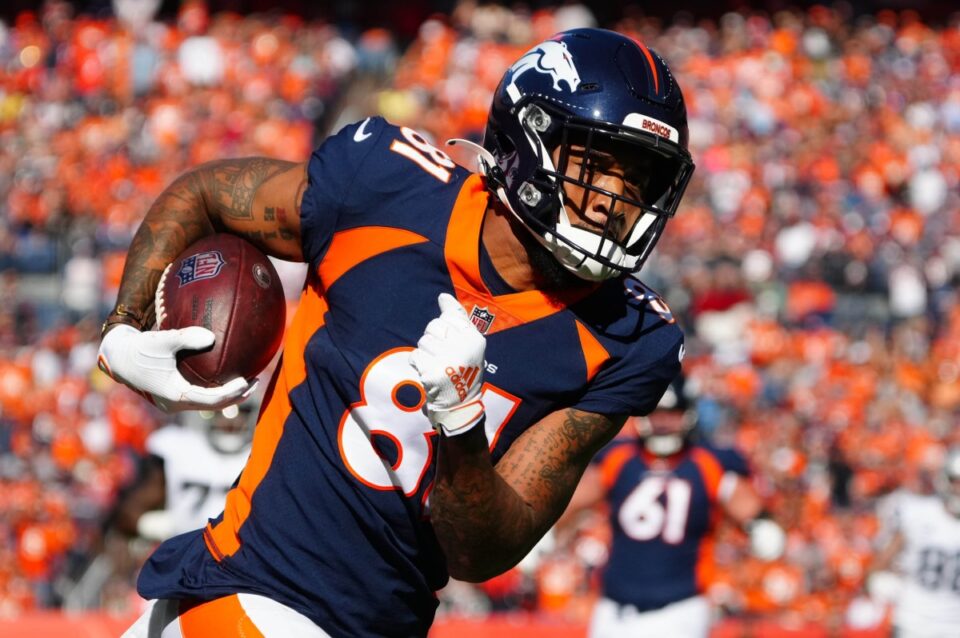 When the devastating news broke that stud wide receiver Tim Patrick would be out for the entirety of the upcoming season, fans began to wonder how the Denver Broncos would cope with the loss. Some started float possible trade scenarios, while others scoured the free agent wide receiver market.

However, the answer is likely right under the Broncos’ nose.

To replace Patrick, you don’t necessarily need to replace his profile. There could even be more upside for the offense in bringing in a receiver to fill that spot that doesn’t do what Patrick did, and that receiver could be former second-round pick KJ Hamler, or the fifth-rounder in this year’s draft, Montrell Washington.

What happens next on the Broncos? Don’t miss out on any news and analysis! Please take a second, sign up for our free newsletter, and get breaking Broncos news delivered to your inbox daily!

The reason for this is due to quarterback Russell Wilson’s strengths. Wilson is widely considered the best deep-ball passer in the league, and while Courtland Sutton is a great “go up and get it” receiver, he isn’t the type to burn through the defense and get hit in stride deep for a long touchdown.

Many of Wilson’s best highlights as a Seattle Seahawk come from him making a great play in the pocket and then launching a ball downfield into the arms of Tyler Lockett or Jermaine Kearse for a touchdown.

Hamler and Washington both can provide this spark for the new Nathaniel Hackett-led Broncos offense if they can become legitimate threats downfield in the NFL. Jerry Jeudy’s job of working the short-to-intermediate routes will become easier with the defense having to play further back to protect those deep passes.

If the Broncos need a bigger-body, possession receiver, they still have former sixth-round pick Seth Williams, who is 6-foot-3, that could get more opportunities this year if he can lock down a roster spot, as well as undrafted rookie Brandon Johnson. Plus, the Broncos signed Darrius Shepherd, a former Green Bay Packers project under Hackett, to round out the bottom of the depth chart.

There aren’t a lot of positives when a situation like this happens. However, Patrick’s injury creates a vacuum, and the Broncos have young players that can use this as a chance to prove themselves and potentially fill it. Broncos Country can be thankful that Patrick was able to secure a lucrative contract extension last offseason.

Whoever fills Patrick’s large shoes couldn’t be stepping into a better situation with one of the best quarterbacks in the league, a bright offensive mind calling plays, and tons of talent at the other skill positions around them to take the pressure off.

What You Need to Know About Predictive Network Technology