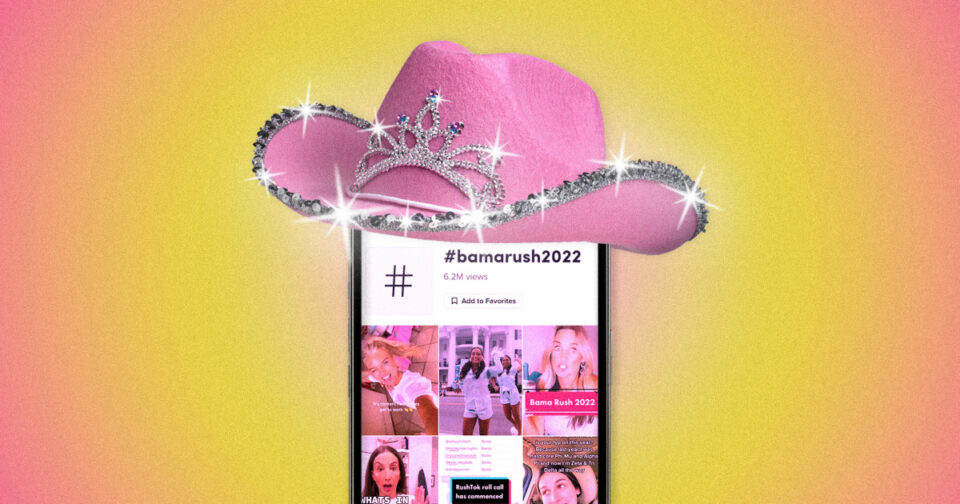 This time last year, Sarah Coon had no idea why people were so obsessed with #BamaRush, or the broader phenomenon that became known as #RushTok.

Now, Coon, 34, is among the thousands invested in the TikToks of women, particularly those at the University of Alabama, documenting their experiences as PNMs (“potential new members”) going through the traditional Greek Life process of rushing aka getting to know the on-campus sororities with the hope that they are offered invitations to join at the end.

She was so captivated by the #BamaRush videos — which racked up millions of views last year — that this time around she has created a spreadsheet to keep track of all the people who have already started posting about it. She has made the list public so others could follow along, too.

But some, including those within the Greek Life realm, have criticized Coon for the spreadsheet. She said she’s been shamed in Facebook posts and direct messages, which she shared with NBC News, and called out in an online Greek Life forum called Greek Rank.

“Some people were like, ‘I know you think this is funny, but you’re being named on Greek Rank, so you should watch out,’” Coon, of Ohio, said. “I was told, ‘Don’t do this. [The PNMs are] going to get blacklisted.”

The blowback came as a surprise to Coon.

Those who are tuning back in for what the internet has described as “Season Two” of #RushTok don’t consider their love of the trend problematic. In fact, many are publicly celebrating the return of #RushTok in tweets and specifically commenting on related videos so that the TikTok algorithm shows more of them on their “For You” pages in the next week.

Megan Sawey, a Ph.D. candidate at Cornell University who researches social media, influencers and content creators, said that for many of the young women rushing, and their parents, this is their first brush with virality and what it means to become a public figure in a parasocial relationship, which is why there may be backlash.

“Because Greek Life has this exclusivity to it, the fact we get to witness it on TikTok and see the recruitment steps these women go through, it becomes this spectacle,” Sawey said. “Now you get to grab your popcorn and watch.”

The term parasocial relationships appears to date back to a 1956 article, written by sociologists Donald Horton and Richard Wohl, that examined the one-sided interaction between a consumer and a figure on the television or radio. The phrase has become especially relevant as social media gives both consumers and creators unprecedented access to each other’s online presences. The more a creator shares online, the closer their viewers might feel to them.

For viewers, #RushTok has become akin to tuning into their favorite reality show. Some have even called it the “NFL draft for women,” Sawey noted. In addition to the spreadsheet, Coon created a bingo card for this year’s rush.

The hashtag #AlabamaRush was viewed nearly 20 million times on TikTok last year, and #BamaRush more than 55.6 million times. The TikToks feature videos of PNMs showing off their outfits for themed events and naming the brand or store each item comes from. Other videos show behind the scenes of how they get ready for the events and, in some cases, attending them.

This year’s Alabama sorority recruitment officially kicks off on Aug. 6. And while the #RushTok videos haven’t popped up on TikTok in full force quite yet, those who enthusiastically followed along last year are ready for the drama (again).

“I saw my first Bama Rush video like last week and I was like, ‘Oh, God. It’s already that time,’” said Jenn Ficarra, 30, of Los Angeles. “I went to school in Boston. Our experience in a sorority was vastly different than other sorority experiences. So I’ve always been fascinated by Southern sorority culture.”

People around the country said they started following the trend because they’re fascinated by Southern sorority life, and BamaRushTok provided a window into something foreign to them.

As one TikTok user Emily Rose said in her video, “I don’t know what these videos have to do with my life as a 33-year-old Canadian, or whether they contain subliminal mind-control techniques, but all I know is that this is my Super Bowl.”

So far, this year’s videos have focused on what’s known as “Work Week,” which is a kind of test run for the PNMs. This means that the outfits, hairstyles and other preparations being shared on TikTok are only practice for the real deal.

Already, some PNMs, like Gracyn Edmonson, have posted some of their outfit plans for Rush Week, which ends Aug. 14. Edmonson did not immediately respond to a request for comment.

“I’m going to show y’all what I have in my rush bag,” she told her followers in a recent video, which has racked up more than 400,000 views since being posted last week. In a pink Longchamp bag, she said she’s carrying a portable fan, a bag of toiletries and other essentials (like a Tide-to-Go pen).

The comments began pouring in immediately. “IT’S STARTING,” one user wrote. Others commenters  described Edmonson as the “first character” of “season 2” of #RushTok.

Will there be less #BamaRush posts this year?

As far as the spreadsheet goes, Coon said if anyone asked to be removed from the list, she’d immediately take their name off. Everyone on the list had made a public TikTok about participating in rush.

Because she said she’s continued to see posts from angry parents and messages from anxious PNMs, she ultimately ended up removing the #BamaRush women from her list altogether and now only has women from other schools on the spreadsheet.

Coon thinks the reason mothers and young women are so nervous about her list is because there have been some rumors PNMs at Alabama have been encouraged not to post on social media.

“WHO do I need to speak to about #bamarush pledges being BANNED from sharing their OOTDs?! I have so few simple pleasures in this world why am I being DEPRIVED?” wrote Tyler McCall on Twitter.

But in its “2022 Greek Chic Recruitment Guide,” the Alabama Panhellenic Council doesn’t have any rules against TikTok under its potential new member behavioral contract.

A spokesperson for the University of Alabama said there is no official ban on social media for Greek Life members.

One thing that’s become clear in the last year is that the #RushTok videos are getting more traction beyond the expected audience.

“Very localized things like rushing a sorority at a specific university, they’re now way more globalized than they were before. Someone living in a different country can watch you rush a sorority in a way that hadn’t been done before,” Sawey said. “There’s a lot more eyes on these things.”

At least 12 dead after bus skids off highway in Croatia