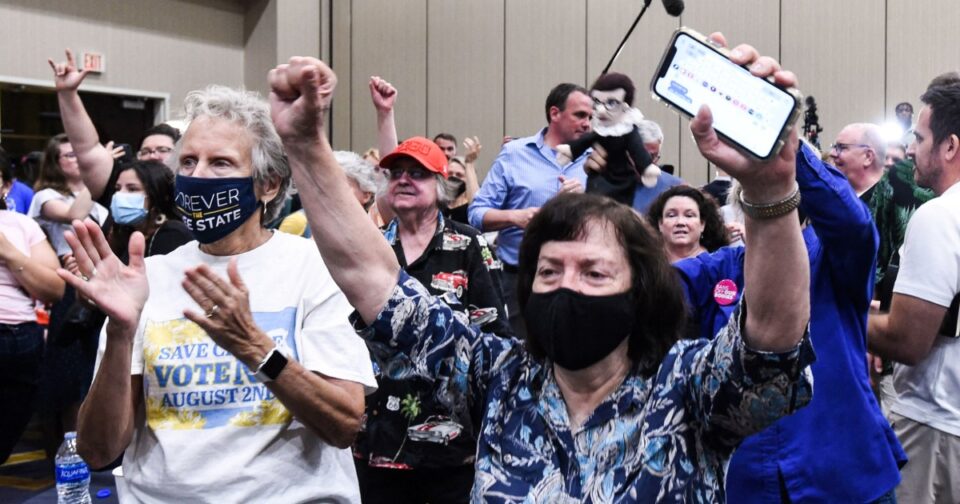 Abortion rights advocates scored a major victory this week when Kansans voted overwhelmingly against stripping protections for reproductive rights from the state constitution. With voters fired up over the U.S. Supreme Court decision overturning Roe v. Wade, Kansas is a success they hope to duplicate in numerous other states in November.

But abortion opponents consider the vote against the proposed constitutional amendment an outlier, and have forged ahead with more ballot initiatives and court challenges that target protections for abortion rights in other state constitutions.

“It’s going to be a state-by-state fight,” Helene Krasnoff, the vice president of litigation and law for Planned Parenthood, told NBC News.

The ballot measures and legal brawls are already underway, sparked by the Supreme Court’s ruling on Mississippi’s abortion ban. The ruling overturned the court’s landmark Roe v. Wade decision guaranteeing a constitutional right to abortion, and the later Planned Parenthood v. Casey decision allowing states to impose some restrictions on abortion before fetal viability, so long as they did not constitute an “undue burden” on the right to the procedure.

The ballot question in Kansas was the first time since the Supreme Court ruling that voters could cast ballots on the issue.

Had voters approved it, the “Value Them Both Amendment” would have removed language from the state constitution that the Kansas Supreme Court said guaranteed the right to abortion, putting the issue under the control of the Republican-controlled Legislature.

Fifty-nine percent of voters rejected the ballot measure amid turnout that the secretary of state said was “incredibly high.” The blowout win by abortion rights supporters in a conservative state where the margin was expected to be narrow has reinvigorated Democrats, who expect heavy losses in the House in November, and left Republicans scrambling to recalibrate on the hot-button issue.

President Joe Biden called the vote “something extraordinary” and said it bodes well for Democrats in the upcoming midterm elections. “People aren’t just going to vote; they’re going to come out in record numbers. And they’re going to vote to reclaim the rights that the extreme Supreme Court has taken away from us and said did not exist in the Constitution,” he said at a Democratic National Committee event the next day.

Kansas state Rep. John Eplee, a Republican who supported the measure, said he was “kind of almost shocked over these results,” which he conceded sent “a message.”

“Every state is different,” Eplee said, but “I think it’s a warning shot to other states that are trying to do similar measures like we did that you better be careful how you word it, and how you impact women’s reproductive health. Because the way this was worded and the way it went down, I think our constituent voter women in suburban areas got the idea of how it would affect them.”

Nevertheless, Kentucky voters are expected to consider a similar ballot measure in November, and Coloradans might too.

Abortion was effectively outlawed in Kentucky earlier this week after an appeals court allowed the state’s “trigger laws” to go into effect after the Supreme Court’s ruling. Abortion rights advocates, including Planned Parenthood, a doctor and two abortion clinics, are challenging those laws in court, arguing they violate patients’ rights to privacy and self-determination under the state constitution.

The ballot measure would make that legal argument moot. It would amend the state constitution to read: “To protect human life, nothing in this Constitution shall be construed to secure or protect a right to abortion or require the funding of abortion.”

In Colorado, where Gov. Jared Polis, a Democrat, signed a law enacting a statutory protection for the right to abortion earlier this year, a group called the Colorado Life Initiative Committee is racing to reach the required 124,632 signatures by the Aug. 8 deadline.

Titled “Unlawful Murder of a Child,” the ballot proposal would make abortion illegal, going as far as to state that any individual who administers an abortion “will be held to equal penalties of homicide.” The law does outline exceptions to save the life or preserve the the health of the mother, including in cases of ectopic or other nonviable pregnancies.

Angela Eicher, one of the committee’s founders, said it has more than 400 volunteers gathering signatures statewide.

“It’s been amazing to see, like, God connecting people and just the movement growing, but there’s also a fair amount of resistance,” Eicher said.

But even if the measure gets on the ballot, it faces an uphill battle in Colorado, which became the first state to decriminalize abortion back in 1967. Voters in the state have rejected ballot initiatives restricting abortion access six times since 1998.

Abortion rights proponents in California, Vermont and Michigan, meanwhile, are hoping voters will turn out to enshrine constitutional protections in those states.

“This is an important opportunity for voters in those states to directly defend their right to make personal decisions about their own lives, bodies and futures,” Nancy Northup, president of the Center for Reproductive Rights, said after the Kansas vote.

In California, a Democratic bastion where the high court has found abortion is a protected right under the state constitution, voters will decide whether an amendment should be added to protect “reproductive freedom.” The measure would state explicitly that California cannot interfere with a person’s right to have an abortion or the right to contraceptives.

California Assembly Speaker Anthony Rendon, a Democrat, said he and Senate President Pro Tempore Toni Atkins worked alongside Planned Parenthood to draft the amendment. From the date of its introduction on July 8, it took less than a month to approve the bill as a ballot proposition.

“I think a lot of Californians are fired up about this issue,” Rendon said, but “it’s incumbent on us to get the vote out and make sure this stays on people’s minds.”

“I think in my own district, this will certainly pass, but I think it’ll pass at the state level too. I think California will make a statement again,” he said.

In Vermont, a liberal stronghold where abortion is already protected under state law, legislators were even more confident about voters signing off on a constitutional amendment lawmakers advanced that would declare “an individual’s right to personal reproductive autonomy is central to the liberty and dignity to determine one’s own life course.”

Advocates in the battleground state of Michigan are confident they’ll be able to get a constitutional amendment on the ballot called “Reproductive Freedom for All,” which if passed would provide permanent protection for abortion care and access to contraception.

Michigan Secretary of State Jocelyn Benson, a Democrat, told MSNBC on Wednesday that it was “a record-breaking number of signatures for a constitutional amendment” in the state.

The measure would also nullify an ongoing court fight over a 1931 law that bans abortion in the state. Two Republican county prosecutors, citing the Supreme Court decision overturning Roe, have said they planned to enforce the ban, which could lead to felony charges for abortion providers. A judge issued a temporary restraining order blocking the law earlier this week.

Benson said the proposed amendment “will give voters an opportunity to weigh in on their stake of protecting their own fundamental freedoms and rights, and our democracy this fall.

“I think what Kansas showed us is really where our voters stand on those issues, which is squarely on the side of protecting those fundamental rights, freedoms and our democracy,” she added.

Abortion rights supporters and opponents are also clashing in the courts over state constitutional protections.

“It’s not one strategy for every state,” said Planned Parenthood’s Krasnoff.

Activists have filed lawsuits to get the courts to recognize abortion as a right under the constitution in four different states with restrictive abortion laws — Idaho, Mississippi, Kentucky and Utah.

Opponents, meanwhile, have focused on states where high courts have already held that abortion is a protected right.

In Florida, a judge last month temporarily blocked a new law that would ban abortions after 15 weeks because it conflicted with earlier state Supreme Court rulings based on precedent dating back decades that established the right to privacy. The state has appealed that ruling, automatically allowing the new law to take effect for the time being. Lawyers for the state’s Republican attorney general argued in a court filing that the earlier decisions were wrong. The “right to privacy does not include the right to obtain an abortion,” the filing said.

A spokesperson for Republican Gov. Ron DeSantis suggested the governor would ask the current, more conservative state Supreme Court to revisit the earlier rulings regarding Florida’s right to privacy.

“The Florida Supreme Court previously misinterpreted Florida’s right to privacy as including a right to an abortion, and we reject this interpretation,” Bryan Griffin, the governor’s deputy press secretary, told the Tallahassee Democrat last month.

In Montana, state Attorney General Austin Knudsen, a Republican, has asked the state’s Supreme Court to reverse a 1999 ruling holding that abortion was protected under the Montana Constitution, saying it “inextricably linked Montana’s right to privacy to the decision in Roe.”

Krasnoff said that while the post-Roe fighting over the issue is taking place at the state level, efforts by abortion rights opponents pressing for national action could change that dynamic.

“It’s going to be a state-by-state fight, but our opposition has made clear from the get-go their goal is a nationwide ban on abortion,” she said. “That’s something a state constitution can’t help with.”