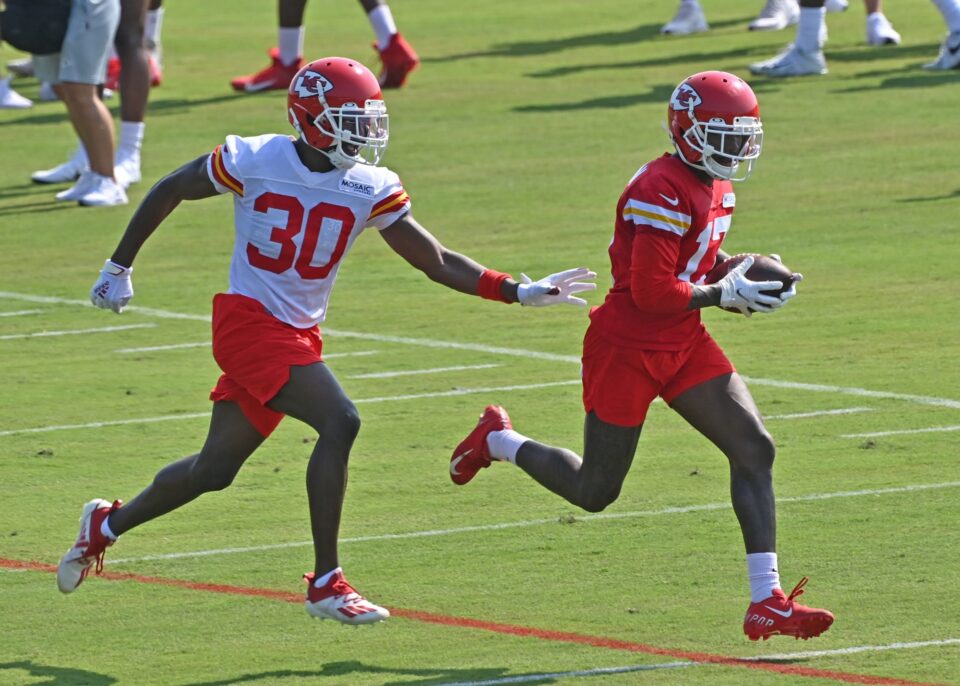 The Kansas City Chiefs will lean on a new cast in the 2022 season; here are three players standing out in training camp who fans won’t be able to ignore.

From offloading star power in the midst of an AFC West reboot to executing a flawless draft plan and taking advantage of late free agency availability, the Kansas City Chiefs offseason was one for the books. The four-time consecutive AFC Championship hosts will be rolling out first-team units on both sides of the ball with more new faces than any other team in the division.

Midway through week two of training camp, there are a number of those new faces making a name for themselves.

But three Chiefs in particular simply can’t be ignored because of how well they’re performing in early practices.

Kansas City Chiefs training camp standouts turning heads3. Rookie RB Isiah PachecoWhen the Chiefs drafted Clyde Edwards-Helaire with the 32nd overall pick in the 2020 draft, it was considered to be a luxury pick. The team’s mantra heading into the season following their first Super Bowl victory in 50 years was “run it back,” and the roster was maintained to justify the battle cry.

CEH was an electric piece of the 2020 National Champion LSU team but has yet to bring that energy to the Chiefs offense. With the persistent injury struggles he has faced in the first two seasons of his career, the 2022 draft served as an opportunity to uncover some greater production in the backfield and ease into life after Clyde.

In his pre-draft press conference, general manager Brett Veach went on the record saying, “I’ve never seen such a large group of fifth, sixth, seventh-round running backs… I told the guys that there is going to be a 1,000-yard rusher that is a seventh-round pick.”

To no surprise, the Chiefs spent one of their four seventh-round selections on a running back: Isiah Pacheco. The four-year captain from Rutgers is a 5-foot-11, 215-pounder that recorded a blazing 4.37-second 40-yard dash at the combine. He was a steady contributor to the Scarlet Knights as a four-year starter and brought with him a versatile skill set that is already set to be applied in a variety of ways.

Special teams coordinator Dave Toub has already announced Pacheco as the starting kick returner, and his involvement with the first-team in offensive drills has been noted on a number of occasions by Chiefs beat writers.

Mecole Hardman heating up in the long-drive team period.

Also, Isiah Pacheco running with the 1st-team offense is a thing, guys.

We’re watching a long drive period with the first-team offense, and though CEH was out there first, already two touches for Isiah Pacheco. I’m beginning to wonder if he can be the RB2 on this club by the time camp breaks.

With a crowded running back room, including Edwards-Helaire, Ronald Jones, and Jerick McKinnon, Pacheco faces a steep challenge to emerge as a legitimate contributor out of the backfield, but regardless of his involvement in the offense Chiefs fans will be seeing a new No. 10 playing a significant role in 2022.