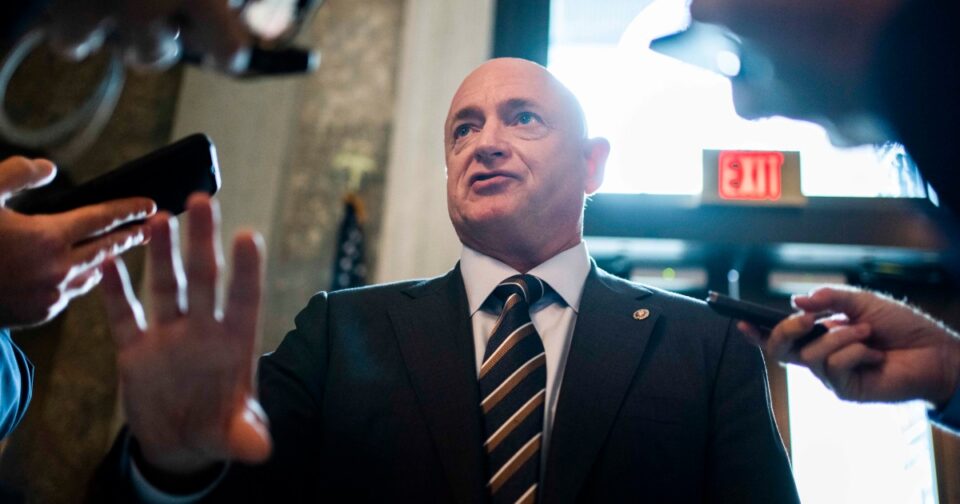 WASHINGTON — Democrats in competitive election races were quick to promote their sweeping new climate and economic package after it passed the Senate on Sunday in a party-line vote, with all Republicans opposing it.

Some were particularly eager to celebrate the policies aimed at cutting prescription drug costs.

“I’m especially proud the legislation includes two provisions I introduced to cap insulin costs for Medicare patients at $35 a month and to limit the cost of prescription drugs for seniors,” said Sen. Raphael Warnock, D-Ga., who faces Republican Herschel Walker in one of the most competitive Senate races this fall.

The Inflation Reduction Act empowers Medicare, for the first time, to negotiate the price of certain drugs directly with the pharmaceutical industry, a move supported by 83% of Americans in a poll conducted last fall by the nonpartisan Kaiser Family Foundation.

Sen. Mark Kelly, D-Ariz., another politically vulnerable incumbent, also took credit for the policy. “We secured our plan to lower prescription drug prices in the final bill,” he said.

Democratic strategists are counting on the issue to help them navigate stiff political headwinds in their quest to keep control of Congress, with Republicans needing to pick up only a handful of seats in November to capture majorities in both chambers.

“The prescription drug piece is extremely, extremely popular,” Democratic pollster Celinda Lake said. “People have wanted it for a long time. This is a real opportunity for Joe Biden to say he’s fighting with special interests and for individual candidates to say the same thing,” she said, noting that the policy is particularly powerful among older women, a key bloc of swing voters.

“It sets up a contrast. No Republican voted for it,” she said.

Asked if opposing the drug pricing provisions would be politically dangerous for his party, Senate Minority Leader Mitch McConnell, R-Ky., dismissed them as “socialist price controls” that would harm the goal of a “healthy pharmaceutical industry.”

“I don’t think socializing prices — that is, putting the government in charge of this — is the way to continue the kind of healthy, effective pharmaceutical industry that saved the lives of millions of Americans,” he told reporters last month, predicting that it would lead to “fewer cures” and “shorter lives.”

As the bill advanced through chamber over the weekend, Senate Republicans voted unanimously for an amendment to exempt certain drugs that treat conditions like Alzheimer’s and cancer. Sen. Roger Marshall, R-Kan., who proposed the provision, said subjecting those drugs to the bill’s policies would “kill innovation.” Democrats voted it down.

Blake Masters, the Arizona Republican taking on Kelly this fall, vowed in a video Sunday that Kelly is “going to own this terrible vote.”

But not all GOP candidates in competitive races are rushing to oppose the Democrats’ pharmaceutical policy, indicating its popularity among voters.

Scott Baugh, the Republican nominee facing Rep. Katie Porter, D-Calif., in a swing district in Orange County, blasted most of the Inflation Reduction Act as “doubling down on a failed policy,” but singled out drug pricing as the one item he’s open to supporting.

“There’s some things in there on the drug pricing that we have to look at and fully evaluate,” he said in a recent interview at his Newport Beach office. “I’m interested in that, yeah.”

Porter, who is listed by Democrats’ campaign arm as a “front-liner” in the battle to keep House control, told NBC News as the bill was being finalized that she anticipates voting for it.

“I’ve done a lot to stand up to pharmaceutical companies,” she said. “I think Medicare should be able to negotiate prices.”

Some progressives, with complaints that the Medicare negotiations would take too long to kick in, have said Americans won’t feel the benefits for years. That means Democrats might need to pull a strong sales job if they want voters to reward them in the midterms.

After his attempts to beef up the provision failed, Sen. Bernie Sanders, I-Vt., called it “a small step in dealing with the outrageous prices of prescription drugs.”

“Unfortunately, that provision does not kick in until 2026 and starts with only 10 drugs,” he said Sunday.

The legislation cleared the Senate with the support of all 50 Democrats and the tie-breaking vote of Vice President Kamala Harris. The bill now goes to the House, where it is expected to pass this week with Democrats from various factions of the majority caucus coalescing around it.

While congressional leaders tend to shy away from passing major legislation so close to an election, the new bill is an exception, in part because Democrats see a net political benefit.

The legislation is a potpourri of poll-tested ideas backed by a range of voters. The drug pricing and deficit reduction components resonate particularly with older and swing voters, and the climate provisions, which amount to the largest spending in U.S. history on the issue, with the Democratic base and younger Americans.

The bill would also prevent a sticker shock in the form of higher premium hikes right before the midterm election, which Democrats had feared would he politically damaging to them.

“It will energize our base by tackling climate change and show swing voters Democrats are serious about fiscal responsibility and tackling inflation,” said Sean McElwee, a progressive strategist with Data for Progress, whose polling on the bill was cited by Schumer.

Pennsylvania Democratic Senate nominee John Fetterman, who is taking on GOP celebrity doctor Mehmet Oz for an open seat, also promoted the legislation, saying it would “start reducing inflation” and “drive down costs for working families.”

Among other things, it would “make health insurance and prescription drugs cheaper,” he said.