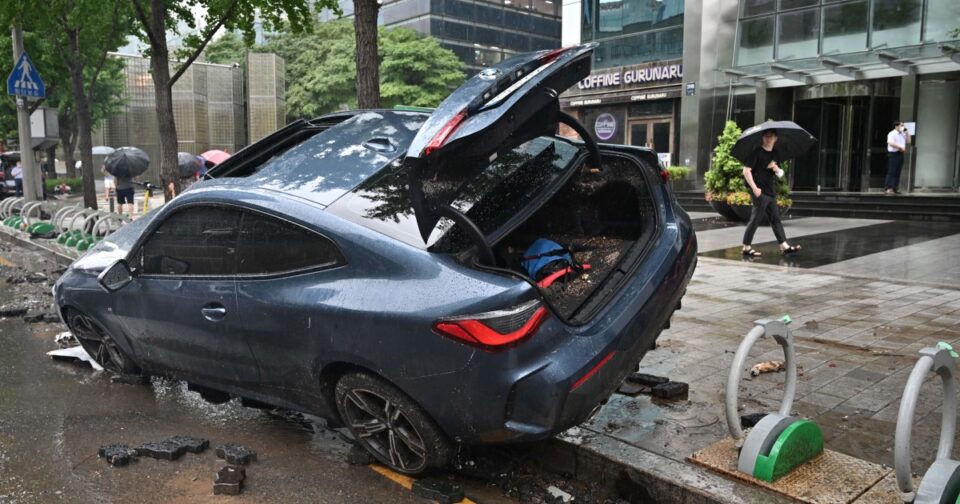 Commuters were slowly returning to work Tuesday morning after emergency crews worked overnight to clean up much of the mess. But there were concerns about further damage as torrential rain was forecast for the second day in a row.

While most of the Seoul metropolitan area’s subway services were back to normal operations, around 80 roads and dozens of riverside parking lots remained closed due to safety concerns.

President Yoon Suk Yeol had called for public employers and private companies to adjust their commuting hours and urged aggressive action in restoring damaged facilities and evacuating people in danger areas to prevent further deaths. Moon Hong-sik, spokesperson for Seoul’s Defense Ministry, said the military was prepared to deploy troops to help with recovery efforts if requested by cities or regional governments.

The rain began Monday morning and intensified through the evening hours. Nearly 800 buildings in Seoul and nearby cities were damaged while more than 400 people were forced to evacuate from their homes, the Ministry of the Interior and Safety said.

People were seen wading through thigh-high waters Monday night in streets near the Gangnam subway station, one of Seoul’s most bustling business and leisure districts, where passenger cars, taxis and buses were stuck in mud-brown waters. Commuters evacuated as water cascaded down the stairs of the Isu subway station like a waterfall. In the nearby city of Seongnam, a rain-weakened hillside collapsed into a university soccer field.

Rescue workers failed to reach three people who called for help before drowning in a basement home in the Gwanak district of southern Seoul on Monday night. Another woman drowned at her home in the nearby district of Dongjak, where a public worker died while clearing up fallen trees, most likely from electrocution. Choi Seon-yeong, an official from the Dongjak district ward office, said it was not immediately clear whether the water was electrified because of a damaged power source or equipment the man was using.

Two people were found dead in the debris of a collapsed bus station and a landslide in the nearby city of Gwangju.

“The heavy rainfall is expected to continue for days … we need to maintain our sense of alert and respond with all-out effort,” Yoon said during a visit to the government’s emergency headquarters in Seoul. He directed officials’ attention to areas vulnerable to landslides or flooding and to reducing the dangers of roads and facilities already damaged.

The country’s weather agency maintained a heavy rain warning for the Seoul metropolitan area and nearby regions on Tuesday and said the precipitation may reach 2 to 4 inches an hour in some areas. It said around 4 to 14 inches of more rain was expected across the capital region through Thursday.

More than 17 inches of rain were measured in Seoul’s hardest-hit Dongjak district from Monday to noon Tuesday. The per-hour precipitation in that area exceeded 5.5 inches at one point Monday night, which was the highest hourly downpour measured in Seoul since 1942.

Rainstorms also pounded North Korea, where authorities issued heavy rain warnings for the southern and western parts of the country. The North’s official Rodong Sinmun newspaper described the rain as potentially “disastrous” and called for measures to protect farmland and prevent flooding on the Taedong river, which flows through the capital, Pyongyang.