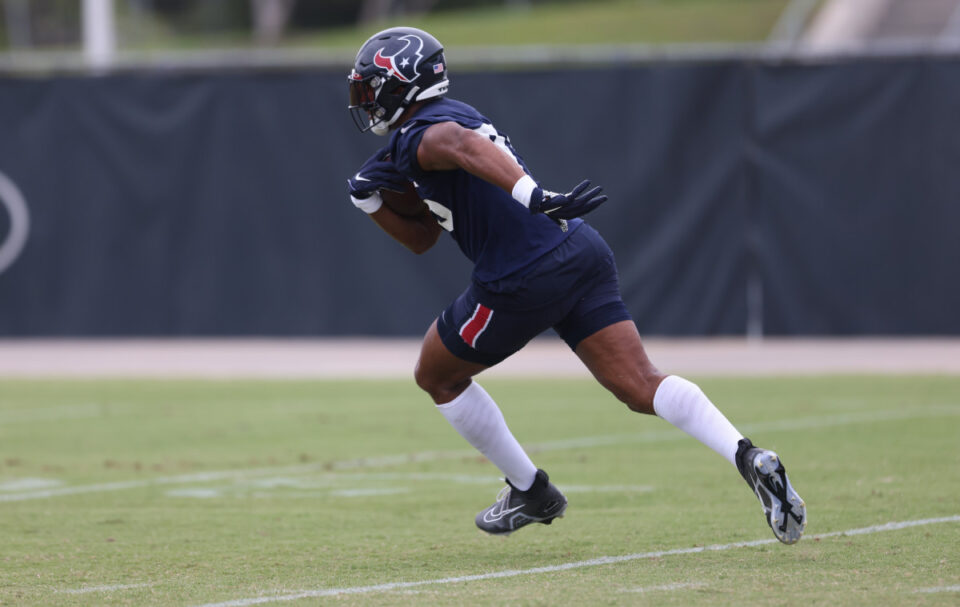 HOUSTON — Slim, shifty and a standout at Houston Texans training camp. That’s exactly what tight end Pharaoh Brown wanted from his changes in the offseason.

Brown, the Texans starting tight end, will be the first to admit he showed up in 2021 overweight. He laughed, calling himself a “fat guy” and often hearing from offensive linemen how he was a “big O-line tight end.”

That was the wake-up call Brown needed to change his regiment. And it’s not that Brown was snacking on cheeseburgers and fries at 3 a.m.; it was his condiment intake that needed a breather.

“I bathed all my meat with Sweet Baby Rays, so it was all the sugar and high fructose corn syrup you don’t really notice,” Brown said Sunday. “You’re like, ‘Oh, I’m eating healthy,’ but I’ve got all these sauces and stuff.”

Last season, Brown entered training camp weighing 277 pounds. His body fat percentage was also at near 18 percent. That factored into his route-running and production as a receiver. Despite being listed as the Texans’ top tight end, Browns finished with a mere 23 catches for 171 yards.

In the offseason, Brown decided to pick up hot yoga to slim down. He also meditated, trying to put an emphasis on his mental state to get his body right.

So far in practice, Brown looks different. Not just in size, but also in speed. His cuts are quicker coming off the line of scrimmage. As a receiver, Brown’s winning not just with his 6-6 frame but also with his newfound agility and vertical quickness.

Brown said he hopes to slim down to 14.1 percent body fat before Week 1’s matchup against the Indianapolis Colts. After that, he’ll take it day by day — or maybe inch by inch is the proper phrase.

The Texans need him to shed some weight, but not all of it. Last season, Brown arguably was the team’s best blocking tight end, eventually playing a factor in Houston re-signing him to a one-year, $3.5 million prove-it contract.

“We have a big guy in Pharaoh inside,” Texans coach Lovie Smith said. “We can line him up at a lot of different positions, so just gives flexibility to our offense.”

Early in camp, second-year quarterback Davis Mills has built a rapport with both Jordan and Brown. Brown continues to build his connection with Mills in the passing game, often being a go-to target in the red zone.

More often than not, Brown is winning at the point of attack, overpowering safeties and smaller corners for an easy score.

“He’s taking strides in all aspects of knowing the game and taking better care of his body and doing everything,” Jordan said of his teammate. “I’m excited for what we can do this year.”

Brown hasn’t shied away from talking about his immense expectations for the upcoming season. During OTAs, he told reporters he was planning for an All-Pro season.

If that were to happen, Texans general manager Nick Caserio would have to cough up a big extension before the start of free agency. The asking price? Maybe around the Cleveland Browns’ David Njoku’s four-year, $54 million extension.

Before any of those talks can begin, though, Brown will need to extend his reception count. He notes that according to his financial advisor, blocking tight ends only receive the league minimum.

“We have to catch a lot more balls,” Brown said. “A lot of that went into it, and now I’m right where I want to be.”

Want the latest in breaking and insider news for the Houston Texans? Click Here