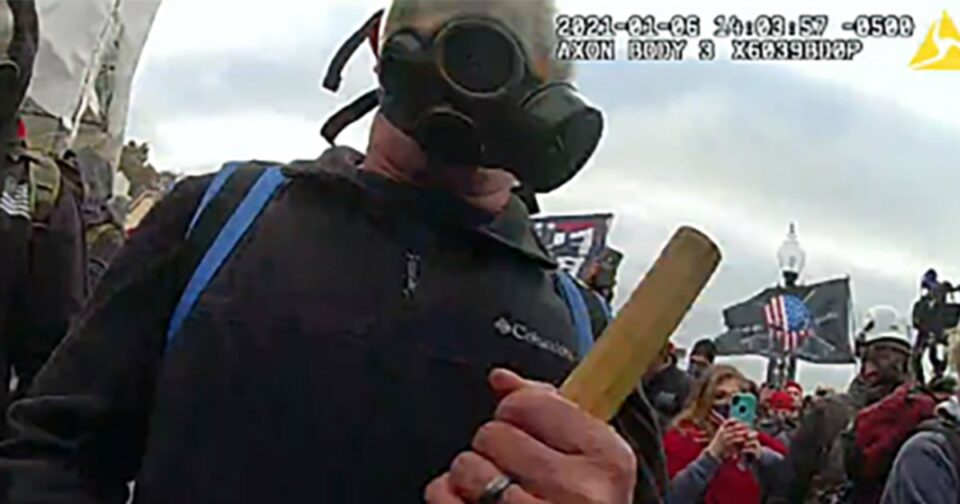 WASHINGTON — A former police officer from Virginia who stormed the U.S. Capitol was sentenced to more than seven years in federal prison Thursday, tying with another Jan. 6 defendant for the longest sentence to date.

A jury in Washington convicted Thomas Robertson, who had been a police officer in Rocky Mount, Virginia, on all six counts in April. His former colleague and co-defendant Jacob Fracker, who took a plea deal, testified that Robertson wanted to “overturn” the election and that he wouldn’t have traveled to Washington if it hadn’t been for Robertson. Prosecutors told jurors that Robertson “put himself right in the middle of it” on Jan. 6 and that he carried a stick as he blocked officers’ paths at the Capitol.

“You were not some bystander who just got swept up in the crowd,” U.S. District Judge Christopher Cooper told Robertson as the defendant stood before him, wearing an orange prison jumpsuit.

Cooper said it still appears that Robertson believes in former President Donald Trump’s conspiracy theories about the 2020 presidential election, and he said he believed Robertson would “answer a call” to violence in the future.

Referring to the stick Robertson carried, U.S. Attorney Matthew M. Graves of the District of Columbia said in a statement after the sentencing: “Thomas Robertson, despite swearing an oath of office when he became a police officer, joined the violent mob at the Capitol on Jan. 6, 2021, and did so while armed. Today’s sentence holds him accountable for his role in the violence that day.”

The Rocky Mount Police Department fired Robertson and Fracker after they were arrested.

Prosecutors had sought what would have been a record sentence for Robertson, but Cooper ultimately decided to go slightly lower, at the bottom end of the sentencing guidelines. In giving Robertson a sentence that matched that of Guy Reffitt, another Jan. 6 defendant who went to trial, Cooper noted that their cases were similar in many ways.

Cooper said he didn’t believe Robertson had actually taken responsibility for his actions on Jan. 6.

A federal prosecutor said during sentencing Thursday that Robertson “used his law enforcement and military training” to block Washington police officers from doing their jobs on Jan. 6. Robertson, they argued, showed “utter disregard for the rule of law” by trafficking in firearms after his arrest.

In court filings ahead of his sentencing, the Justice Department said Robertson lied about his military background and several other aspects of the case.

In one text Robertson sent after his arrest, which prosecutors highlighted, he said he could “kill every agent that they send for probably 2 weeks. Maybe longer.”

Cooper showed particular concern about Robertson’s actions after his arrest, including firearms trafficking and advocacy for violence.

In new survey, teachers say they’re being told not to talk about racism, race