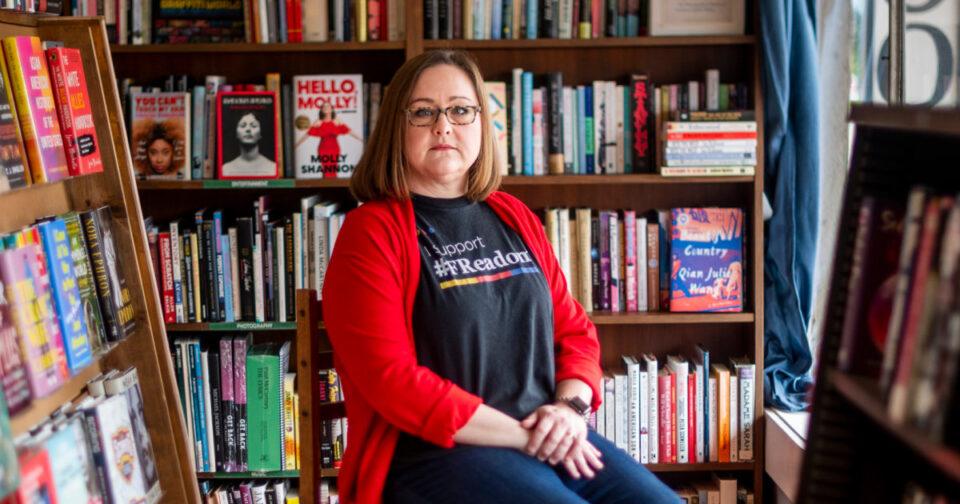 A Louisiana school librarian is suing two men for defamation after they accused her of advocating to keep “pornographic” materials in the parish library’s kids’ section. It’s a rare example of an educator taking legal action against conservatives who use extreme rhetoric in their battle against LGBTQ-themed books.

Jones, the president of the Louisiana Association of School Librarians, was alarmed and outraged by the verbal attacks, which came after she spoke against censorship at a Livingston Parish Library Board of Control meeting. She said she’s suing the two men because she’s exhausted with the insults hurled at educators and librarians over LGBTQ materials.

“I’ve had enough for everybody,” Jones said in an interview. “Nobody stands up to these people. They just say what they want and there are no repercussions and they ruin people’s reputations and there’s no consequences.”

Nationwide, school districts have been bombarded by conservative activists and parents over the past year demanding that books with sexual references or that discuss racial conflict, often by authors of color or those who are LGBTQ, be purged from campuses. Those demands have slowly moved toward public libraries in recent months.

Many conservative activists have referred to people who defend the books as “groomers,” comparing them to child molesters. The Proud Boys, an extremist hate group, has barged into LGBTQ-themed reading events in several libraries, insisting they need to protect children. Some librarians have said they no longer feel safe serving in their roles.

Jones, the 2021 Louisiana Association of Computer Using Educators Middle School Teacher of the Year and the 2021 School Library Journal’s Librarian of the Year, said more than 200 librarians have reached out to her as the insults on Facebook spread. Many claimed they had been victims of similar verbal and online abuse in the past two years. More than 600 people donated a combined $20,000 for Jones on GoFundMe so she could respond with legal action.

The defamation suit seeks damages and asks a judge to issue a restraining order to prevent the two activists from speaking about Jones publicly. She also filed criminal complaints with the Livingston Parish Sheriff’s Office against the men. The sheriff’s office said the case is under investigation.

Jones spoke against censorship at the Livingston Parish public library’s board meeting on July 19 when the board had been set to consider a motion to evaluate the content of certain books. Posts on Facebook in the days leading up to the meeting expressed outrage about sexual references in sex education books available at the public library. Jones and many other local citizens feared the board would respond by banning or restricting literature with LGBTQ content and themes, which they’d seen happen elsewhere.

At the start of the meeting, board member Erin Sandefur said an unnamed state official brought some “inappropriate” books available at the library to her attention

“The citizens of our parish consist of taxpayers who are white, Black, brown, gay, straight, Christian, non-Christian — people from all backgrounds and walks of life, and no one portion of the community should dictate what the rest of the citizens have access to,” Jones said at the meeting. “Just because you don’t want to read it or see it, it doesn’t give you the right to deny others or demand its relocation.”

Jones did not mention any specific title in her remarks, but said it’s a “false narrative” that librarians are putting pornography in children’s sections. She also conceded that “book challenges are often done with the best intentions, and in the name of age appropriateness.”

Lunsford, who runs a conservative activist group called Citizens for a New Louisiana, spoke at the meeting in favor of restrictions on books with sexual content.

Over the next two weeks, the organization’s page posted several more times about Jones, at one point stating she believes “that sharing erotica and instructing juveniles on sex acts is progressive.”

People commented on some of the posts with calls that she be physically assaulted, and they circulated where she worked, screenshots show.

She added that she was overwhelmed and didn’t leave her house for two weeks, instead she had groceries delivered. She sat down with her teenage daughter to explain the memes and Facebook posts, and worried what her classmates would say to her about them. Even when people told her they were rooting for her, she said it still felt embarrassing.

But she felt compelled to fight back, she said, because she’s well-known in the library world and  if she didn’t speak out, other targeted librarians would not either.

“If this takes four or five years, I’m going to fight these people on this,” she said. “Even if I lose, I could say I stood up to them.”

Mississippi will send back fed’s rental aid, even as housing needs remain high