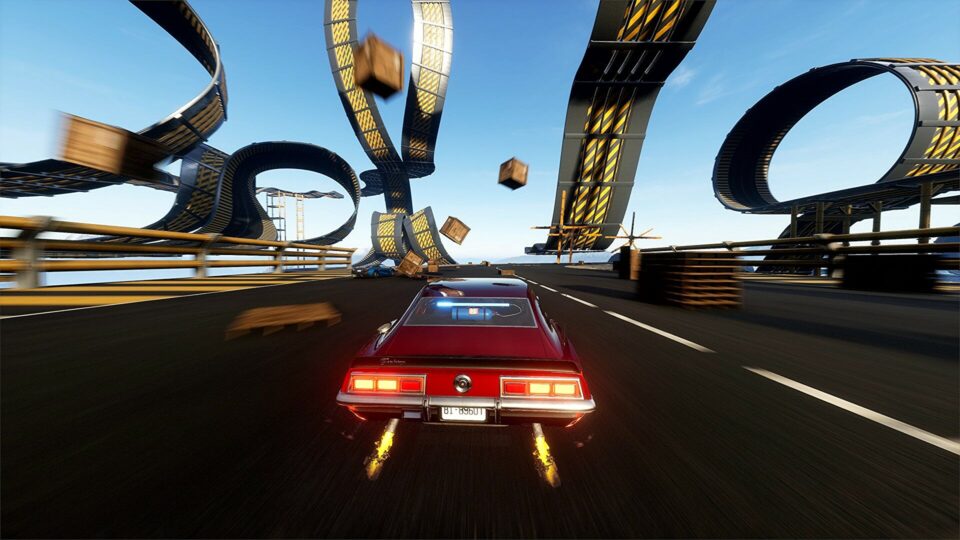 Three Fields Entertainment are responsible for lots of games with “dangerous” in their title: Dangerous Driving, Danger Zone, and Dangerous Golf. But now they’ve got a new racing game in the works which eschews their previous naming convention for something that’ll make you say with a wry smile and a shake of the head, “I see what you did there”. It’s called Wreckreation (you know, like ‘recreation’, not Wreck-reaction, or Wreck–eation) and its reveal trailer looks a bit like if Burnout and Hot Wheels went for a joyride together.

Not a huge surprise, really, considering Three Fields are mostly comprised of former Burnout and Need For Speed devs, but Wreckreation definitely has the stylings of Criterion’s classic racer. You’ve got muscle cars zooming around crashing into each other, then doing the whole slow-mo “Takedown” of yore, where you see the car clatter off course for a brief second or two. The racing? Yeah, it looks as expected, ditching realism for tight cornering and explosive arcade-style speed.

And then you’ve got the world – 400 square kilometres of freeform sandbox racing – which is how the game attempts to differentiate itself from the competition. You’ll oversee your own MixWorld, a big map that you’re able to jazz up with loops, jumps, and other obstacles like windmills and *checks notes* ducks the size of a gas station. And it looks like you’re free to plonk them anywhere, either creating elaborate Scalextric sets in the sky or offroad obstacle courses.

Judging by the brief trailer and tidbits of info on the game, it looks fun! It has lots of customisation options from paint colours, glass colours and engine sounds, and it also has its own FM radio dial with 16 different channels to pick from (or your own Spotify Premium playlists if you prefer). The promise of blasting through player created courses also has me cautiously excited. I just need to see more, really, and whether building using its free camera view is easy and intuitive. Whether you’re able to peruse other people’s stuff without it being a faff, or share my creations with others in a jiffy. If it gets these sorts of technicalities right, then I reckon we’ll be in for a treat.

There’s currently no release date for Wreckreation, but you can keep up with it over on Steam.

How Family Businesses Can Compete for Talent