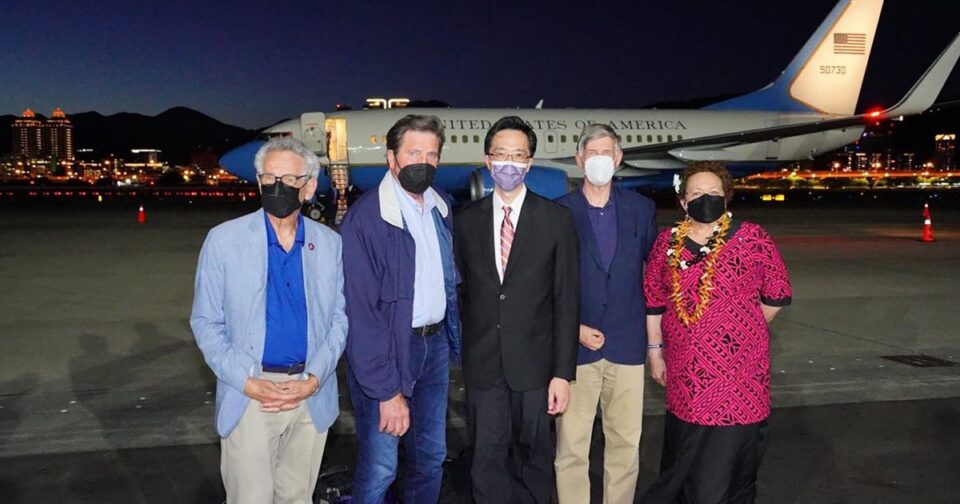 They will meet senior Taiwanese leaders to discuss security, trade, supply chains and other issues, the statement said.

Taiwan’s Ministry of Foreign Affairs said the delegation would meet President Tsai Ing-wen on Monday morning before leaving the island later that day. They will also attend a banquet from Foreign Minister Joseph Wu and visit the Legislative’s Foreign Affairs and National Defense Committee.

“At a time when China continues to raise regional tensions, the U.S. Congress is once again organizing a heavyweight delegation to Taiwan to show its undaunted friendship and demonstrate strong U.S. support for the island,” the ministry said in a statement.

After Pelosi‘s visit to Taiwan earlier this month China angrily denounced her trip as a “serious violation.”

Beijing views Taiwan as an illegitimate breakaway province, “a sacred and inalienable part of China’s territory.” When the civil war in China between the communists and nationalists ended in 1949 with the former triumphant, the latter set up a rival government in Taipei.

Since the 1970s the U.S. has officially only recognized Beijing but has since become Taiwan’s main arms supplier and international backer.

China is yet to comment on the current visit, but after Pelosi’s trip. Beijing then launched the largest ever series of military exercises around the self-governing island on Aug. 4.

Live fire-drills by the China’s People’s Liberation Army effectively encircled Taiwan’s main island, which is about 100 miles off the coast of Mainland China.

The same day it also launched 11 ballistic missiles to the north, south and east of Taiwan. They were the first Chinese launches in waters around Taiwan since 1996.

After the conclusion of the military exercises on Wednesday, multiple Chinese planes have continued to breach the unofficial median line down the Taiwan Strait on a daily basis. On Sunday, 11 planes crossed the median line, Taiwan’s Defense ministry said in a statement.

China said Pelosi’s visit violated the “one-China policy,” which is Beijing’s claim to be the sole government of both mainland China and Taiwan and accused the United States of trying to change the status quo by strengthening unofficial relations with Taiwan.

“Faced with this, China has no choice but to fight back and defend its sovereignty and territorial integrity,” Vice Foreign Minister Ma Zhaoxu told Chinese state broadcaster CCTV on Tuesday.

The same day, in an interview with NBC’s “TODAY” show, Pelosi said, “We cannot allow the Chinese government to isolate Taiwan.”

“They’re not going to say who can go to Taiwan,” she said.

Panthers HC Matt Rhule on Baker Mayfield, Sam Darnold: ‘They were both in command’ in first game