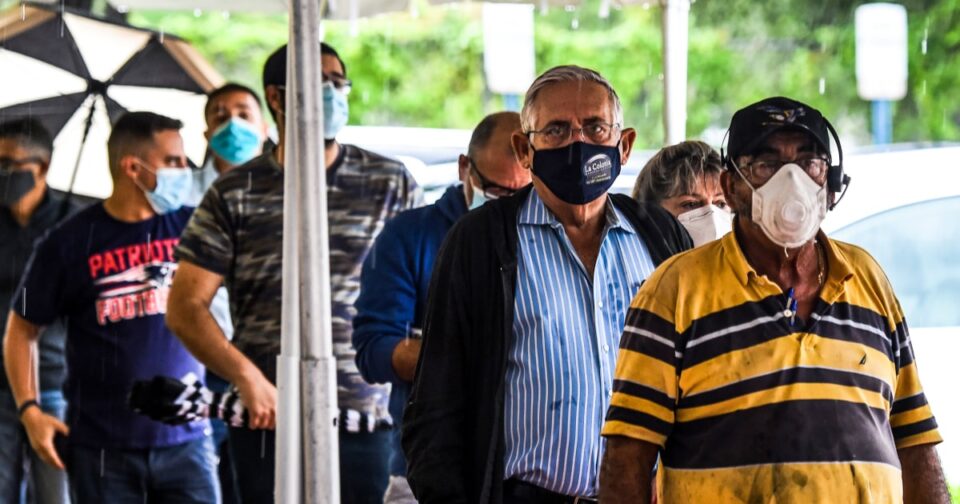 It’s an indication of how in the competitive Sunshine State, the stakes are high when it comes to battling for Hispanic voters.

The ads use the voices of Fried supporters from different countries of origin and races: Colombian, Venezuelan, Dominican, Cuban, Mexican, Puerto Rican and Afro Latino. In the ads, supporters explain why they are voting for her.

In one ad, Venezuelan Luis Atencio, says, “I come from a country without democracy, and as a new citizen, I support Nikki Fried because she will protect democracy in Florida.”

“These ads show that we’re going wherever we need to in order to deliver the message that Florida needs a governor that sees all communities and that they all have a place at the table,” said Evelyn Pérez-Verdía, founder of We are Más, a firm that focuses on messaging to diaspora communities and produced the ads.

Verdía, who is also an adviser to Fried, said the ads reach communities that many campaigns ignore, groups that Fried has met with since she announced her candidacy.

Colombians make up an important voter group in the state, with nearly 300,000 eligible voters — yet they are often ignored by campaigns.

Florida’s primary election day is one week away and the latest poll has Fried with a four-point advantage over her Democratic primary opponent, U.S. Rep. Charlie Crist. It’s a last-minute reversal from earlier surveys, most of which had Crist leading with a comfortable margin.

Both Democratic candidates trail incumbent Republican Gov. Ron DeSantis in most polls. Although Fried and Crist agree on many issues, both say they are better equipped to defeat DeSantis in November.

In 2020, around 17% of registered voters in Florida were Latino.

Elections in Florida traditionally have been won by close margins. Former President Donald Trump won the state by almost four points in 2020. Nationwide, he made gains among Latinos compared to 2016, but nowhere was it more evident than in Florida, where he won close to half the Hispanic vote in 2020.

But following Trump’s election, he courted many of the state’s Hispanic groups through constant attacks against Latin American leftist governments, which resonates with many exiles in Florida. He and top officials like Vice President Mike Pence and former national security adviser John Bolton traveled to Miami multiple times to make foreign policy speeches.

Trump won the Cuban American vote that often goes to Republicans, but he also made big gains with voters from the Colombian, Venezuelan and Nicaraguan community.

Crist, a three-term member of Congress and former Republican governor, has focused less on specific Latino groups and made more general outreach to Hispanics as a whole. He has met, though, with immigrant farmworkers, Cuban Americans, Venezuelans and Puerto Ricans in the state and on the island. The campaign has a coalition to mobilize Latino voters called “Unidos con Crist.”

“Reaching Hispanic voters has been a top priority of the Crist campaign from day one,” said Crist spokesperson Samantha Ramirez. “Our campaign is taking a comprehensive approach that leaves no stone unturned. That’s why Charlie has met with Puerto Ricans, Cubans, Venezuelans, and so many others in the Hispanic community to ensure their voices are reflected in his vision of a Florida for all.”

Whoever wins the Democratic nomination this month will compete with DeSantis, a potential 2024 presidential contender. DeSantis, popular among Hispanics in Florida and Republicans nationally, has raised over $100 million for his re-election bid.

A spokesperson for DeSantis, Lindsey Curnutte, said via text message that “Governor Ron DeSantis is not interested in merely checking a box” when it comes to Hispanic voters but has “a bold agenda that resonates with Floridians from all walks of life.”

Like Trump, DeSantis has taken aim at leftist governments in Latin America. Most recently, he blasted the election of leftist President Gustavo Petro in Colombia during a press conference, a candidate that most Colombian voters in Florida rallied against.

DeSantis also established Nov. 7 as “Victims of Communism Day,” when public schools are required to teach students about communist regimes. While Lt. Gov. Jeannette Nuñez said it was part of an effort to combat “woke” terms in the classroom, it was also a nod to the state’s Latino voters who have fled communist countries, such as Cuban Americans.