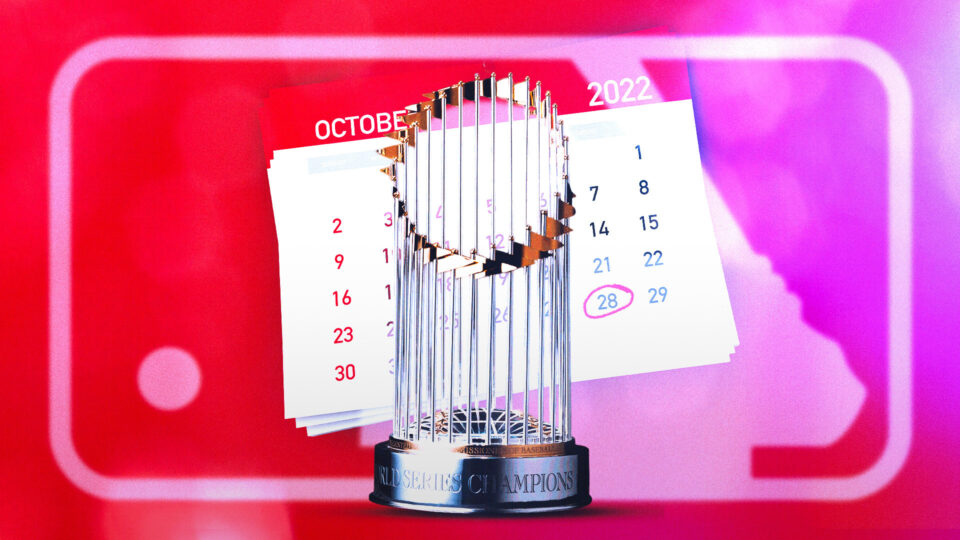 Major League Baseball released its 2022 postseason schedule Monday, and the World Series will start on Friday, Oct. 28 on FOX Sports.

It’s the first time since 1915 that the World Series would start on a Friday. The postseason could end on Nov. 5 — its latest ever — because of the lockout that delayed opening day.

Major League Baseball said Monday its expanded postseason will begin with all four games in the new wild-card series on Oct. 7. The other games of each best-of-three series will be on Oct. 8 and, if necessary, Oct. 9.

The new format has 12 teams making the playoffs, up from the 10 in place from 2012-21, except the 16 used in the 2020 playoffs that followed a regular-season shortened to 60 games because of the coronavirus pandemic. The top two teams in each league get first-round byes, while the No. 3 seed faces No. 6 and No. 4 plays No. 5. The higher seed will be home in each best-of-three series.

FOX Sports’ coverage will begin with the NLDS, which starts Oct. 11. All games will be broadcast on FOX Sports or FS1.

The ALDS begins the same day, with all games televised on TBS.

Opening day was delayed from March 31 to April 7 because of the 99-day lockout that ended on March 10, and the regular season was extended by three days to Oct. 5.

It will be its first Friday start since Oct. 8, 1915, at the Baker Bowl in Philadelphia, when the Phillies beat the Red Sox 3-1 before losing the next four games.

The Series went into November for the first time in 2001, when the 9/11 terrorist attacks caused the regular season to end a week later than originally scheduled. The latest a Series game has been played is Nov. 4, in 2001 and again in 2009. Last year’s Series ended on Nov. 2 when the Atlanta Braves beat the Houston Astros in Game 6 for their first title since 1995.

The Associated Press contributed to this report.

Get more from Major League Baseball Follow your favorites to get information about games, news and more.

Should Cowboys take a chance on Antonio Brown? | SPEAK FOR YOURSELF