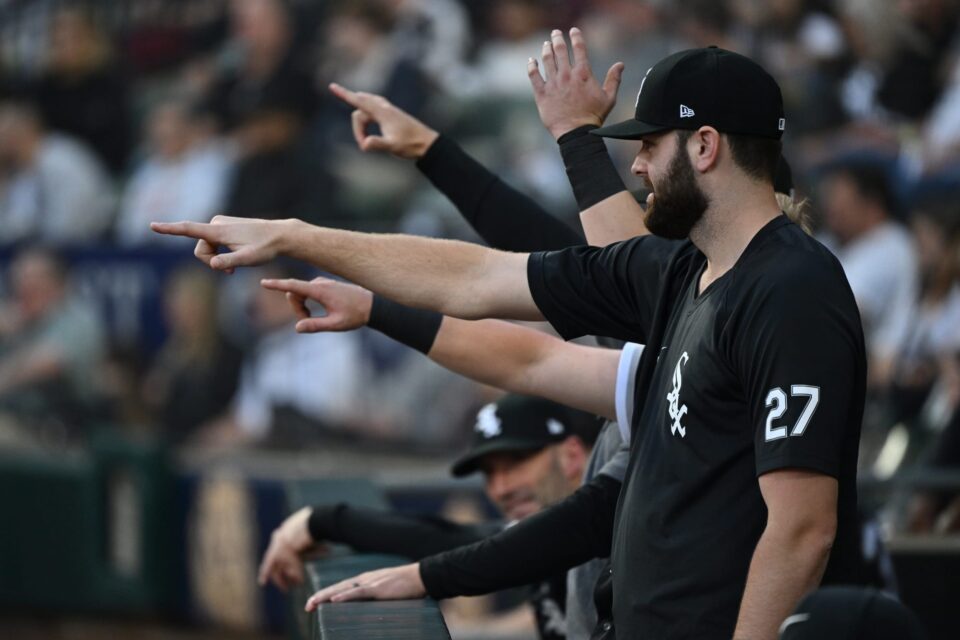 CHICAGO, IL – JUNE 10: Lucas Giolito #27 of the Chicago White Sox and other White Sox players point from the dugout during the second inning against the Texas Rangers at Guaranteed Rate Field on June 10, 2022 in Chicago, Illinois. (Photo by Jamie Sabau/Getty Images)

Well, we believe in exit velocity, bat flips, launch angles, stealing home, the hanging curveball, Big League Chew, sausage races, and that unwritten rules of any kind are self-indulgent, overrated crap. We believe Greg Maddux was an actual wizard. We believe there ought to be a constitutional amendment protecting minor league baseball and that pitch framing is both an art and a science. We believe in the sweet spot, making WARP not war, letting your closer chase a two-inning save, and we believe love is the most important thing in the world, but baseball is pretty good, too.

Welcome to The Moonshot.

Nobody notices the Chicago White Sox are in the AL Central race until they accidentally win itThe Chicago White Sox, the consensus favorite to take their division and more entering the regular season after paying their dues in 2020 (Playoff Sea Legs Season) and 2021 (Get Waxed by the Astros Season), have been asleep at the wheel for 4.5 months worth of baseball. Their manager, specifically, has been slumped over on the dash, his hard hair accidentally honking the horn on his Miata for 95 straight minutes as bourbon fumes waft over the highway.

And yet, without a single person noticing, the ChiSox are now three games over .500 and just 2.5 games out of the AL Central lead. Has this phenomenon been spoken about by one human?

As of Monday, the Guardians have wrested control of the division from the Minnesota Twins (barely), while Tony La Russa is left wondering how far down the standings the Cleveland In****s must be for him not to notice them at all. Despite significant buzz entering the season, the White Sox have been buried in the headlines since their first moribund pitch. Their ace, Dylan Cease, somehow was not named to the All-Star Team, either as a first-run star or a replacement, despite going 14 starts without allowing more than one earned run.

When the Sox are one or two games out with a week to go, someone will have to notice them. And when they wind up in a best-of-three Wild Card series with a negative run differential, ESPN will have to rewrite their packages — after all, you’ve got to cover a playoff game! But right now, Chicago has a chance to be the most silent division champion since the 1913 Sarasota Whispers.

Baseball, but for your earsThe Phillies will make the playoffs but the Red Sox won’tWith summer winding down, hopeful MLB teams are kicking things into high gear. Here are two predictions for the home stretch:

The Philadelphia Phillies will end their postseason drought, the longest in the National League. Losing two of three to the New York Mets would’ve been deflating under any of their previous few managers, but Rob Thomson’s calming presence will prevent their usual late-season collapse. Bryce Harper will return from his broken thumb and rake again, and Aaron Nola won’t collapse in September like he usually does.

The Boston Red Sox won’t make the playoffs, but they won’t finish dead last, either. They’re currently in fifth place in the AL East, but several key reinforcements are on the way. As their Injured List gets smaller, their win-loss record will flip right-side up again, and they’ll be an above-.500 team by season’s end, albeit a disappointment.

Shohei Ohtani is going to win MLB MVP againThis doesn’t count as weird – at least I don’t think it should – but Shohei Ohtani will separate himself in the American League MVP voting.

This is not to discredit what Judge has done this season. Judge, 30, has hit .300/.398/.678 with 46 home runs, 100 RBI, a 1.076 OPS and seven WAR. He’s been the best hitter in baseball and after turning down a seven-year, $213.5 million contract extension this winter, is increasingly likely to command a contract worth north of $300 million in free agency this winter.

But what Ohtani has done this season is something that baseball has never seen. He’s hitting .254/.349/.499 with 26 home runs and 68 RBI while posting a 2.68 ERA and 157/27 strikeout-to-walk ratio in 111 innings. He’s basically Matt Olson and Max Scherzer combined into one player. Just take a look at this stat from CBS Sports to put Ohtani’s season into perspective:

Through his first 50 career starts as a pitcher and 500 games as a hitter, Ohtani has: more strikeouts than Jacob deGrom; lower ERA than Gerrit Cole; more home runs than Ted Williams; more RBI than Ken Griffey Jr.

“It would be the biggest MVP robbery of all time as of now if (Ohtani) doesn’t win,” one baseball evaluator said recently.

I would have to agree.

Dana White lists his Top 5 UFC fighters of all time