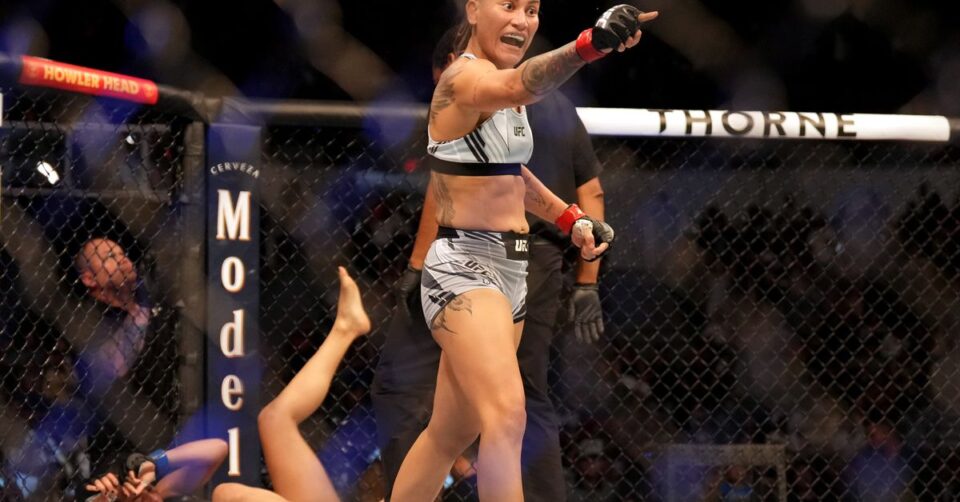 Priscila Cachoeira scored quite the finish at UFC San Diego. In her Octagon bantamweight debut, ‘Zombie Girl’ made quick work of former KSW flyweight champion Ariane Lipski, when she scored a TKO win just 65 seconds into the first round.

A heavy-handed athlete, Cachoeira does not try to hide the fact that she likes to look for the knockout in all of her outings. In an interview with Combate shortly after the win, Priscila shared her thoughts on the victory and the excitement she felt right after getting her hand raised.

“That’s the style I love the most, striking,” Cachoeira said. “I love striking, but I’m always training and looking to evolve my ground game, too. This is MMA, but there’s nothing better than a knockout for a knockout artist. I’m the Zombie Girl. I’m really proud of this nickname that the UFC has given me. In fact, I’d like to know how many seconds was the win, I don’t know that yet.”

Originally paired up against Lipski for a flyweight bout back on August 6, Cachoeira saw the fight get postponed one week once Ariane missed weight by 2.8 pounds. Having to cut weight and diet for an additional week was no easy task for Priscila, but she thanks her nutritionist and her training camp for being able to power through it and score a much needed win.

“It’s a bit exhausting to do two fight weeks in a row,” Cachoeira said. “You finish one diet, you rehydrate yourself, you start eating well again. Then you have to start dieting again. You prepare your mind for a fight and then nothing. Here’s the thing, though. I’m here to fight. I have a wonderful nutritionist, LC, and I owe this weight cut to him. He wouldn’t sleep until I had gone to bed. I was very relaxed. I was just waiting for the time to pass so I could come here and I do what I had trained to do for three months.”

On a two-fight winning streak, Cachoeira (12-4) scored a unanimous decision win over Jin Yeon Kim, back in February, before knocking out Lipski. Before that, the 33-year-old got submitted by Gillian Robertson via rear-naked choke, in December 2021.