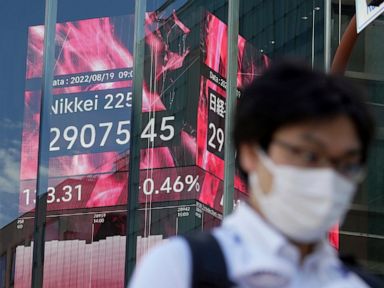 NEW YORK — Wall Street capped a choppy week of trading Friday with a broad slide for stocks that left the major indexes in the red for the week.

The S&P 500 closed 1.3% lower, breaking a four-week winning streak. Shares in more than 80% of the companies in the benchmark index fell, with technology stocks driving much of the pullback.

Friday marked the heaviest selling for the market, including the S&P 500’s biggest decline in more than seven weeks, after a solid run of weekly gains. The strong market rally in July and early August followed better-than-expected company earnings and signs that the economy is slowing, possibly setting the stage for less aggressive rate hikes, the Federal Reserve’s main tool for taming surging inflation.

Minutes from the central bank’s interest rate policy meeting last month and recent statements by Fed officials appeared to signal that the Fed may not be prepared to relent just yet from its pace of rate increases, said Quincy Krosby, chief equity strategist for LPL Financial.

“That put the market on notice that perhaps the market may have to contend with a Fed that continues to raise rates at a steady pace and perhaps does not pause and take its foot off the pedal,” she said.

That gave traders “the perfect excuse to finally begin to burn off” some of the market’s recent gains.

Technology stocks had some of the biggest losses and the sector’s dip weighed heavily on the broader market. Microsoft fell 1.4%.

Meme stock Bed Bath & Beyond sank 40.5% after the high-profile activist investor Ryan Cohen confirmed that he’s sold his stake in the company.

Cryptocurrencies fell broadly as Bitcoin slumped 8.5% to $21,370, according to CoinDesk.

Traders had no shortage of company and economic data to review this week, including the latest batch of earnings from retailers and updates on spending, home sales and the employment market.

Big retailers including Walmart and Target have warned investors that inflation is crimping consumer spending. Department store owner Macy’s will report its results next week.

A report on retail sales this week showed that spending remains resilient as gasoline prices fall and help ease some pressure from inflation.

Wall Street is trying to determine how stubbornly hot inflation is affecting businesses and consumers and whether the economy can remain resilient and avoid a recession.

The data from government and corporate reports is also being closely watched as investors try to determine how the Federal Reserve will continue with its plan to fight inflation by raising interest rates. The goal is to raise rates and slow down economic growth to cool inflation. But, the central bank is threading a fine line between taming inflation in an already slowing economy and hitting the brakes too hard and veering the economy into a recession.

Wall Street will be keenly watching next week’s speech by Federal Reserve Chair Jerome Powell at an annual conference in Jackson Hole, Wyoming.