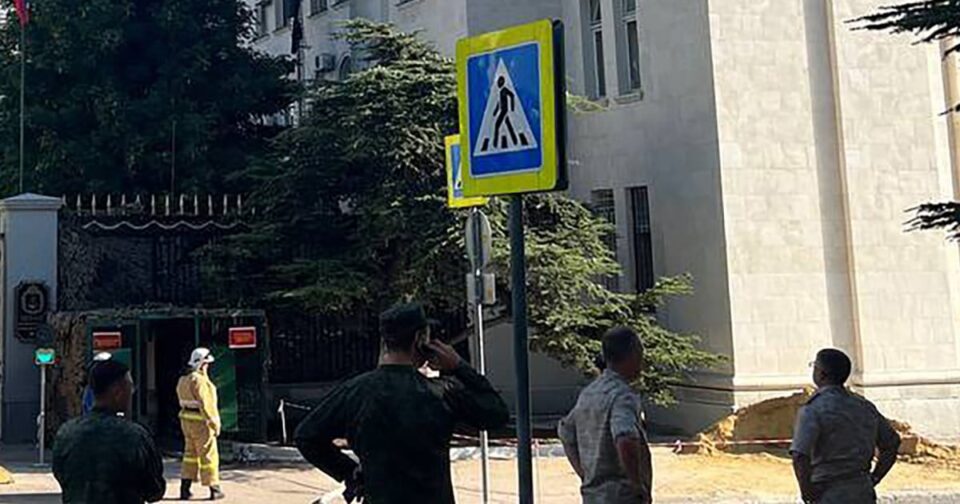 The headquarters of Russia’s Black Sea fleet was hit by a drone early Saturday, Russian officials said, as Ukraine continued to strike military targets in the annexed Crimean Peninsula.

Mykhailo Razvozhaev, the Russian governor of occupied Crimea, said on his Telegram channel that he was at the building in the port city of Sevastapol when “drone flew to the roof.

“Unfortunately, it was not shot down,” he said.

But in a later “clarification” of the incident also posted to Telegram, he said the unmanned aerial vehicle was “shot down right above the fleet headquarters. It fell on the roof and caught fire. The defeat failed. Well done boys.”

Photos and video posted online by Ukrainian politicians and media outlets appeared to show the aftermath of the attack, and a large plume of smoke could be seen rising from the fleet’s headquarters. NBC News was not able to independently verify them.

The attack came after a series of blasts hit military depots and airbases in the annexed peninsula over the past week, hinting at a growing ability by Ukraine’s military or its backers to strike deep behind enemy lines.

Kyiv has stopped short of publicly claiming responsibility for the explosions, but a government official who spoke on the condition of anonymity because he is not authorized to disclose information about the strikes to journalists, confirmed to NBC News this week that pro-Ukrainian saboteurs were behind them.

The official declined to say whether the Ukrainian military or special forces were also involved in the attacks.

Elsewhere, Russia’s Tass news agency reported that anti-aircraft systems shot down six Ukrainian drones over Nova Kakhova, a small town to the east of the city of Kherson.

Home to about 300,000 people, Kherson is by far the largest town and first regional capital to be in Russian hands. Controlling the city also means Moscow can supply fresh water to its forces in Crimea.

Elsewhere a Russian missile hit a residential area of a southern Ukrainian town not far from a nuclear power station on Saturday, wounding 12 civilians and heightening fears of a nuclear accident, Ukrainian officials said.

Vitaliy Kim, governor of the Mykolaiv region, said on the Telegram messaging app that four children between the ages of 3 and 17 were among those wounded in an attack that damaged several private houses and a five-story apartment building in Voznesensk.

The town is about 19 miles from the Pivdennoukrainsk Nuclear Power Plant, the second largest in Ukraine.

Energoatom, Ukraine’s energy company that manages all four of the country’s nuclear energy generators, described the attack on Voznesensk as “another act of Russian nuclear terrorism.”

“It is possible that this missile was aimed specifically at the Pivdennoukrainsk Nuclear Power Plant, which the Russian military tried to seize back at the beginning of March,” Energoatom said in a statement.

Russia did not immediately respond to the accusation and NBC News was not able to independently verify the situation on the ground.

The Mykolaiv strikes came after Russian President Vladimir Putin warned his French counterpart, Emmanuel Macron, on Friday that shelling of the Russian-controlled Zaporizhzhia nuclear power plant, which sits to the east of Mykolaiv, could result in a large-scale disaster.

A readout of the call from Macron’s office said Putin agreed to an International Atomic Energy Agency mission to the plant.