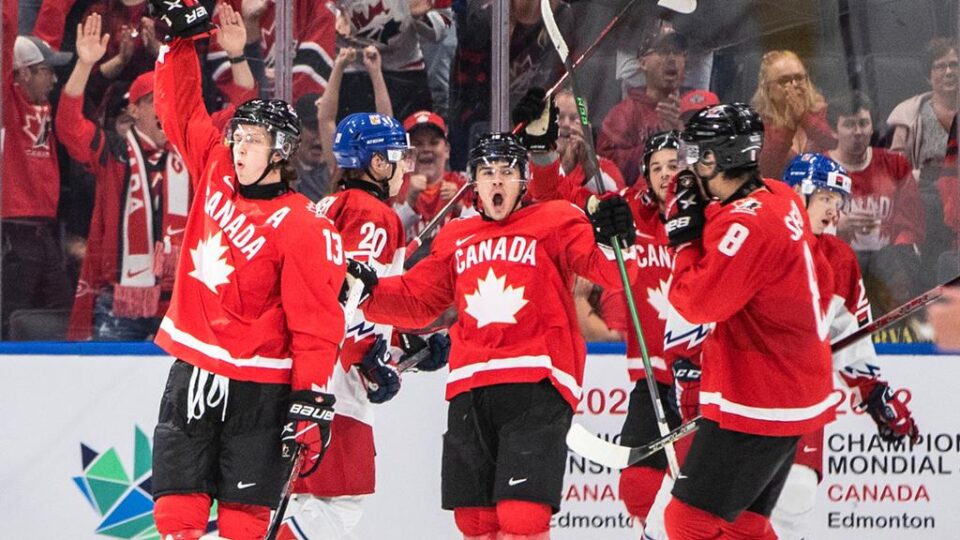 Friday was the semifinals of the 2022 IIHF World Junior Championship, which is being held at Rogers Place in Edmonton.

Canada 5, Czechia 2 — Kent Johnson (Columbus Blue Jackets) had a goal and two assists to help Canada advance to the championship game for the third straight year.

Logan Stankoven (Dallas Stars) had a goal and an assist, and Olen Zellweger (Anaheim Ducks) had three assists for Canada, which won the championship in 2020 but lost to the United States in the final in 2021. Dylan Garand (New York Rangers) made 30 saves.

Canada will play Finland in the championship game on Saturday (8 p.m. ET). Czechia will play Sweden in the consolation game (4 p.m. ET).

“It’s really cool, it hasn’t really sunk in yet,” said forward Connor Bedard, who is projected to be the No. 1 pick in the 2023 NHL Draft. “I think the whole group, you can feel the energy in the room. We’re just so excited to have that opportunity.”

Jan Mysak (Montreal Canadiens) and Michal Gut scored for Czechia, which upset the United States in the quarterfinals. Tomas Suchanek allowed four goals on 26 shots before being replaced at the start of the third period by Pavel Cajan (Columbus Blue Jackets), who made eight saves.

“I think it was good game from us,” Gut said. “They are a pretty good team. They have lots of good guys who have played in the American (Hockey) League or the NHL. I think we played well, but it’s over and we will be ready tomorrow.”

Johnson gave Canada a 1-0 lead 10:04 of the first period with his second goal of the tournament. His first also came against Czechia in a 5-1 win in the preliminary round.

Stankoven scored on the power play to extend the lead to 3-0 at 11:28 of the second period. Johnson spun at the blue line and passed to Stankoven, who entered the zone with speed and beat Suchanek.

Mason McTavish (Anaheim Ducks) scored another power-play goal to make it 4-0 at 16:11. He leads the tournament with eight goals and 15 points.

Mysak made it 4-1 at 10:54 of the third period when his shot deflected in off the leg of Canada defenseman Donovan Sebrango (Detroit Red Wings).

Canada forward Ridly Greig (Ottawa Senators), who did not play because of an upper-body injury he sustained in the first period against Switzerland in the quarterfinals, will not play in the championship game.

Jatkola was a surprise starter for Finland after Leevi Merilainen (Ottawa Senators) started four of the first five games, including making 19 saves in a 5-2 win against Germany in the quarterfinals on Wednesday.

“I think we were smart with the puck, didn’t do anything fancy at the blue lines or red lines,” Puutio said. “That’s why we were able to control the game. And then when they got the pressure, we were really humble and blocked shots and really threw our hearts out there for the goalie. And Juha played a heck of a game.”

Jesper Wallstedt (Minnesota Wild) made 27 saves for Sweden, which will play Czechia in the consolation game on Saturday (4 p.m. ET).

Puutio scored the game’s only goal on the power play at 5:18 of the second period. Topi Niemela (Toronto Maple Leafs) broke the puck out of Finland’s end and passed it ahead to Aatu Raty (New York Islanders), who entered Sweden’s zone with speed before flipping a pass across to Puutio. The defensemen then knocked the puck down with his hand in the left face-off circle, cut to the net and beat Wallstedt.

The goal was Finland’s tournament-best 14th on the power play.

Sweden had a chance to tie it late in the second period, but it couldn’t convert a 5-on-3 man-advantage for 1:34.

“They are a great team in the defensive zone,” Sweden forward Liam Ohgren (Minnesota Wild) said. “We tried our best to get inside, but they kept us on the outside and we didn’t get the chances. It was really tough.”

Finland will play in the championship game for the first time since 2019, when it defeated the United States to win the gold medal.

“It’s incredible with this group of guys,” Puutio said. “I think we battled through for six years and we faced some adversity. It’s a great feeling right now. It’s going to be hard to get some sleep, but we’ll be ready to go tomorrow.”

2022 NFL preseason, Week 2: What We Learned from Friday’s games