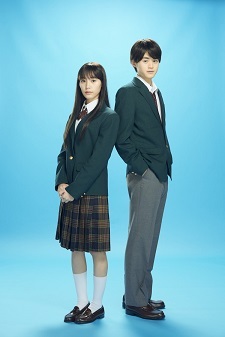 Netflix Japan announced a live-action series based on Karuho Shiina‘s Kimi ni Todoke (Kimi ni Todoke: From Me to You) manga on Wednesday. TV Tokyo and Netflix are co-producing the series, with FINE Entertainment credited for production cooperation. The live-action will stream worldwide on Netflix in March 2023.

Nikkatsu adapted the manga into a live-action movie in Japan in 2010, with Naoto Kumazawa (The Anthem of the Heart) at the helm. The movie was released internationally as From Me to You in 2011.


The shoujo romance manga began serialization in Bessatsu Margaret magazine in May 2005 and has been collected into 30 volumes between May 2006 and March 2018. VIZ Media licensed the manga in English in August 2009 and shipped the final volume in September 2018.

Sawako Kuronuma is a 15-year-old student often mistaken for the horrific, vengeful spirit Sadako Yamamura from The Ring. The uncanny resemblance leads to Sawako being called “Sadako” instead. Due to her aloof and gloomy appearance, her peers have grown afraid, and they keep their distance from her. But despite such treatment, she harbors an innocent and diligent heart.


Given her honest desire to make friends, Sawako holds a profound admiration for Shouta Kazehaya, the most popular boy in her class. Through his refreshing personality and smooth interpersonal interactions, Kazehaya naturally draws in people. Wishing to be more like him, Sawako begins to spend more time with Kazehaya. While attempting to turn over a new leaf, Sawako finds herself encouraged to explore new things that she never dared before, with Kazehaya right beside her. [Written by MAL Rewrite]

Maude Apatow Responds to Being Called a Nepotism Baby: “I Try Not to Let It Get to Me”