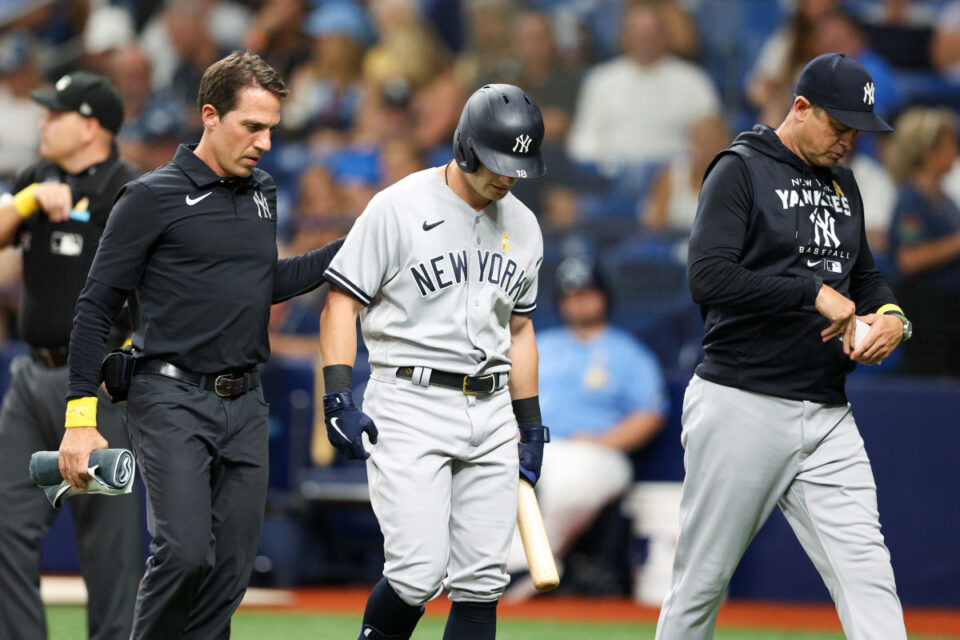 Yankees outfielder Andrew Benintendi has a fracture in his right hamate bone and his status is unknown for the rest of the season. The team is hopeful that the injury is not season-ending, according to manager Aaron Boone.

The Yankees have been in a second-half free-fall as they’ve seen a double-digit division lead dwindle down to five games. A recently bungled West Coast road trip that saw the club drop two out of three to both the Athletics and Angels left New York in a pivotal spot heading into a weekend series against second-place Tampa Bay.

The Rays took two out of three, and now even more pressure is on the Yankees as they look to close out a division that they’ve led almost the entire season.

Benintendi, a trade deadline acquisition, was supposed to anchor the middle of the order and shore up a sore spot for the club in the outfield. However, since being acquired, Benintendi has struggled to keep the form that made him an All-Star with the Royals in the first half of the season. With Kansas City, Benintendi hit .304 with 51 RBI, but since joining New York, he’s hitting just .254 with 12 RBI in 33 games.

The injury to Benintendi’s wrist is one he’s dealt with in the past. Benintendi had the hamate bone in his wrist removed before his freshman year of college.

“It’s something I’ve dealt with before,” Benintendi said Sunday. “I have [dealt with it] before but now we’re still trying to learn some more things. But yeah, that’s what it is right now. Meeting with doctors tomorrow in New York and go from there. Just take it day-by-day at this point.”

Benintendi, much like Boone, hopes the injury isn’t season-ending.

“When I went through this before, it was right around a couple weeks. So we’ll see what happens. Obviously, I want to get back out there and get back in time for the latter part of the season, and then hopefully the playoffs. It’s all too early to say right now. I’ll know some more tomorrow when I talk to the doctors.”