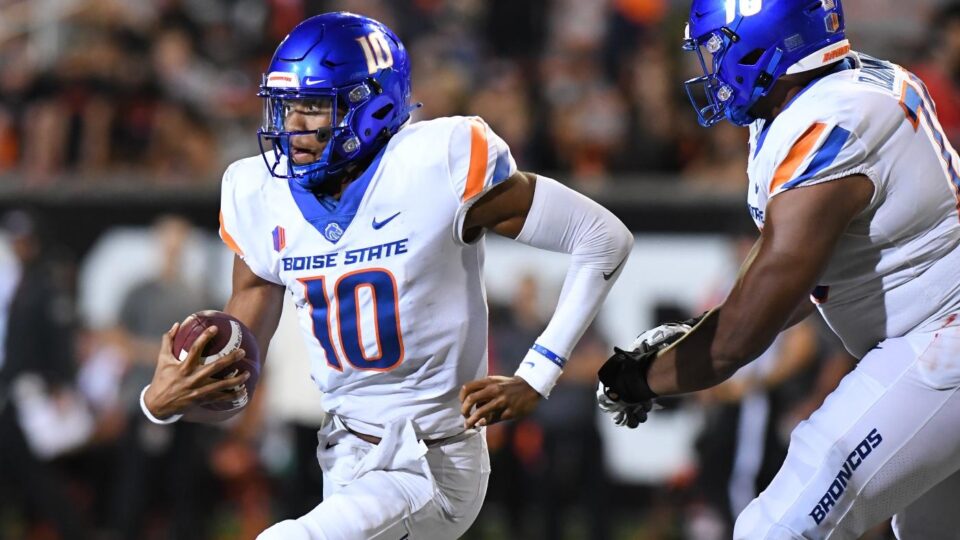 The Boise State Broncos visit the New Mexico Lobos on Friday night, and they will be looking to solve their offensive woes in a hurry in this Week 2 college football matchup. Boise State was the media’s pick to win the Mountain West, but they turned the ball over five times last Saturday in a 34-17 loss to Oregon State. The Lobos, picked to finish last in the MWC, opened against FCS Maine on Saturday, and they dominated both sides of the ball in a 41-0 rout. Boise State has a quarterback controversy on its hands after Hank Bachmeier threw two interceptions on just eight pass attempts before being benched. He was replaced by Taylen Green, who raised eyebrows with an electrifying 74-yard TD run but also made his share of mistakes. The Broncos have won 11 of the 12 all-time meetings, including a 37-0 home victory last November.

Kickoff is set for 9 p.m. ET at University Stadium in Albuquerque, N.M. on CBS Sports Network. The Broncos are 17-point favorites in the latest Boise State vs. New Mexico odds from Caesars Sportsbook, and the over/under for total points is set at 44. Before locking in New Mexico vs. Boise State picks, be sure to check out the college football predictions and betting advice from the SportsLine Projection Model.

Now, the model has locked in on Boise State vs. New Mexico and just revealed its picks and CFB predictions. You can head to SportsLine now to see the model’s picks. Here are the college football odds and betting lines for New Mexico vs. Boise State:

Why the Broncos can coverBoise State is a perennial conference title contender and has had tremendous success against the Lobos. Coaches were excited about the offensive progress in the offseason, and Bachmeier threw just eight interceptions last season (on 401 attempts). He threw for 3,079 yards with 20 TDs in 2021, and coach Andy Avalos hopes he will bounce back, but Green is an enticing prospect. The redshirt freshman completed 19 of 28 passes for 155 yards and ran for 102 last week. The bulk of that was on his 74-yard burst when he looked like the fastest man on the field.

The turnovers and a defense that allowed 470 yards didn’t give the Broncos much chance. They will be fired up Friday, and they won’t be pushed around by the Lobos like Maine was. Boise State outgained New Mexico 427 yards to 102 last season, which the Lobos finished at 3-9 and ranked last in FBS in total offense. The Broncos are 4-1 against the spread in the past five meetings, winning by 14 in 2017 and winning the other four by at least 28. The Broncos had 23 takeaways last season, and New Mexico QB Miles Kendrick threw two interceptions last week.

Why the Lobos can coverNew Mexico looked like a completely different team in last week’s victory. It showed incredible depth, with eight rushers posting at least 20 yards as the Lobos rushed for 267 in the victory. Sherod White was the top rusher with 13 carries for 58 yards and two touchdowns. Luke Wysong was everywhere, posting 128 all-purpose yards — 43 rushing, 51 receiving and 34 on punt returns — and also scoring two TDs. Kansas transfer QB Miles Kendrick looked like a huge addition against Maine, completing 14 of his 17 throws as New Mexico piled up 437 total yards.

The QB also rushed for 40 yards on 11 carries, while freshman receiver Jah’Mar Sanders had two rushes for 25 yards and a TD. Geordon Porter, a transfer from Arizona State, was the top receiver with five catches for 54 yards and a TD. The Lobos also held the Black Bears to 108 yards, forced two turnovers and had three sacks. Reco Hannah had 1.5 sacks in his return from a serious knee injury suffered last year. Hannah is joined by Ray Leutele and Syaire Riley in a strong linebacking corps that is the heart of widely-respected coordinator Rocky Long’s unit.