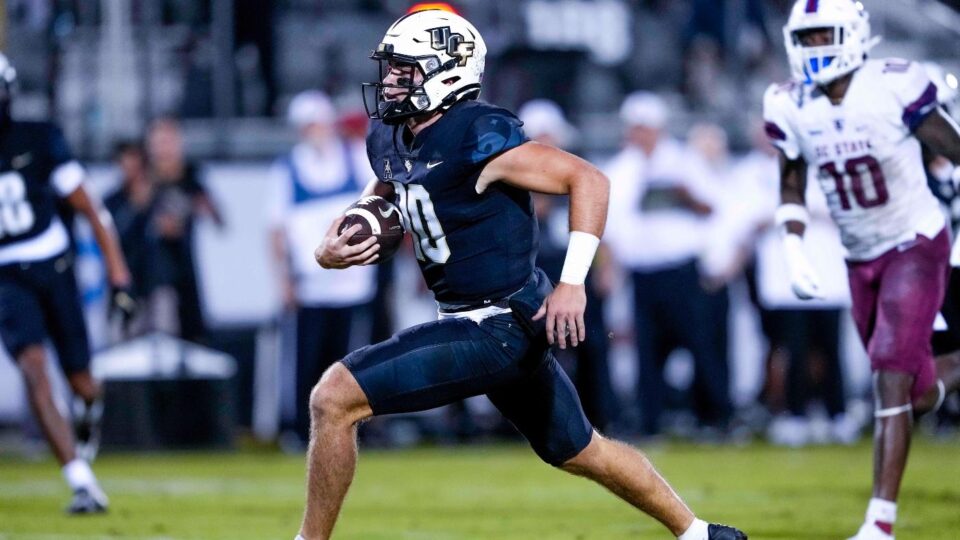 The UCF Knights have been making a habit of getting off to good starts, winning at least their first two games each of the last five campaigns. They began the run in 2017, when they won all 13 of their contests for the first undefeated season in school history. UCF attempts to continue the streak when it hosts the Louisville Cardinals on Friday. The Knights (1-0) opened the 2022 campaign with a convincing victory, a 56-10 triumph over South Carolina State. Louisville (0-1) was less than impressive in its opener, losing 31-7 at Syracuse.

Kickoff at FBC Mortgage Stadium in Orlando, Fla. is set for 7:30 p.m. ET. The Knights are 5.5-point favorites in the latest UCF vs. Louisville odds from Caesars Sportsbook, while the over/under for total points scored is 61.5. Before making any Louisville vs. UCF picks, you need to see the college football predictions and betting advice from the SportsLine Projection Model.

Now, the model has set its sights on UCF vs. Louisville and just revealed its picks and CFB predictions. You can visit SportsLine now to see the model’s picks. Here are several college football odds and betting lines for Louisville vs. UCF:

Why UCF can coverJohn Rhys Plumlee’s first game with the Knights was an impressive one as he produced five of the team’s seven offensive touchdowns against South Carolina State. A transfer from Ole Miss who spent last season as a receiver for the Rebels, Plumlee set career highs with 308 passing yards and four TD tosses while also running for 86 yards and a score. Senior running back Isaiah Bowser ran for UCF’s other two offensive touchdowns and registered 109 (89 rushing) of the club’s 600 total yards in the victory.

The Knights received solid performances from several of their other transfers last week. Junior wide receiver Javon Baker, who spent the previous two years at Alabama, made five catches for 84 yards and a TD while former University of Florida tight end Kemore Gamble hauled in three passes for 82 yards and a score. On the other side of the ball, redshirt senior linebacker Walter Yates III made seven tackles in his debut with UCF after playing for Savannah State from 2018-21.

Why Louisville can coverQuarterback Malik Cunningham will be looking to bounce back from a season-opening loss in which he failed to throw or run for a touchdown, ending his streak of 30 consecutive games with a score. The senior did set the school record for starts by a signal-caller (39) last week and will establish another mark Friday as he makes his 37th in a row. Cunningham led the Cardinals to a 42-35 victory over UCF last season, throwing for 265 yards and a TD while rushing for 99 yards and a pair of scores.

Like the Knights, Louisville saw some of their transfers have strong debuts last week. Junior running back Tiyon Evans, who played at Tennessee last season, led the ground attack for the Cardinals as he made 13 carries for 89 yards and a touchdown. After three years at Central Arkansas, junior wideout Tyler Hudson became the fourth player in Louisville history to eclipse the century mark in receiving yards in his team debut by recording 102 on eight receptions.

How to make UCF vs. Louisville picksSportsLine’s model is leaning Over on the point total. In fact, it says the starting quarterbacks combine for more than five total touchdowns. It also has generated an against-the-spread pick that cashes in almost 70% of simulations. You can only see the model’s Louisville vs. UCF pick at SportsLine.

So who wins UCF vs. Louisville? And which side of the spread hits almost 70% of the time? Visit SportsLine now to see which side of the Louisville vs. UCF spread to back, all from the advanced model that is up almost $3,500 on its top-rated college football spread picks, and find out.