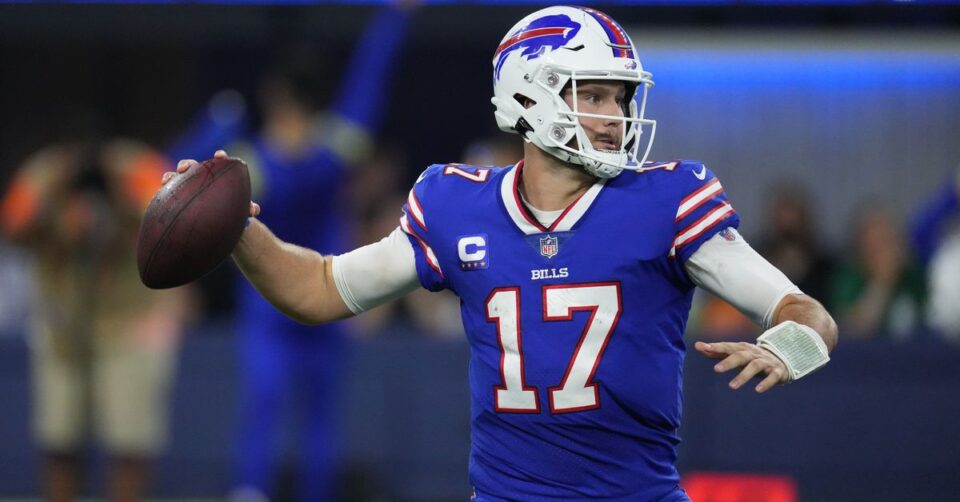 The Los Angeles Rams were looking to celebrate their 2021 Super Bowl victory, hang up their championship banner and ring in the 2022 season with a victory.

The Buffalo Bills figuratively took that banner, put it on a table, set it on fire and jumped through it.

The Bills exploded in the second half, scoring 21 unanswered points and cruising to a 31-10 victory. Despite the game being somewhat of a blowout, there are takeaways we can use from this game:

The Bills offense is a war machine
My goodness, Josh Allen. The Bills signal caller went 26-31 for 297 yards with three touchdowns and two interceptions, and added 56 yards and a touchdown on the ground. The numbers on the surface are impressive, but when you look at how Allen won it becomes clear that he has developed into one of the league’s best QBs.

In the first half, Allen saw a lot of 2-high coverages, forcing him to take the underneath passes and checkdowns. That which used to be an issue for Allen (short area accuracy and impatience) has seemingly become a strength. Allen targeted the short areas of the field with laser efficiency, firing in passes on time outside of an interception that he threw in the first half.

When the second half rolled around, the Rams would begin to get more aggressive, playing man coverage or blitzing. This is when Allen made them pay, either using his legs to great effect or doing things like this, which shouldn’t be normal for an NFL QB but for Josh Allen it’s just another Thursday:

This is a concept called “Mills”, where the inside receiver runs a dig, and then the outside receiver runs a post deep. The Rams send a blitz to the overloaded side and crushed the pocket, but for Allen he throws the ball with anticipation, letting Gabriel Davis get under it for a 47 yard gain. If Allen is going to continue to be this efficient underneath and in the short area while also being able to beat teams over the head with the deep passes, good luck.

In addition, the Bills were able to be multiple and varied in the run game. Pulling right tackle Spencer Brown on read option plays, using fullback Reggie Gilliam on designed outside zone tosses. Now that they can get into more gap scheme runs and mash teams in order to get them out of the 2-high shells they’ll see, it makes their offense extremely dangerous.

Von Miller is the straw that stirs the drink, but the Bills DL is deep and dangerous
It was Von Miller’s return to SoFi Stadium, and he did not disappoint, notching two sacks in the win that are a perfect encapsulation of what the future Hall of Famer is.

On the first sack, he sets up Rams LT Joe Noteboom on the outside feigning a speed rush, then uses a “forklift” technique, lifting the tackle’s hands and bull rushing him into Rams QB Matt Stafford. Then on the next sack, he dips right under Noteboom’s hands a flies past him for a sack, a Von Miller special.

Although Miller is obviously the big name guy, the Bills defensive line dominated the Rams front, and they did it in waves. Before getting injured defensive tackle Ed Oliver was impressive. Jordan Phillips overwhelmed the Rams interior, notching 1.5 sacks. Young edge defenders Gregory Rousseau, AJ Epenesa and Boogie Basham combined for 3.5 sacks. In total, the Bills notched seven sacks and seven tackles for loss. Free agent acquisition Shaq Lawson didn’t even play. This Bills defensive line is deep, versatile and dangerous, and Von Miller is the star.

Matt Stafford might not be an issue (yet)…
So let’s talk about Matt Stafford’s performance. The Rams signal caller went 29-41 for 240 yards with one touchdown and three interceptions, but for most of the game he just looked…uncomfortable. Of his 29 completions 13 of them went to Cooper Kupp, and no other receiver caught more than five passes. Free agent acquisition Allen Robinson only caught one pass on two targets, and never seemed to find his way in the game. The normal hi-lo routes with Kupp sailed a lot more than usual, and it just looked like a disjointed offensive performance.

However, don’t worry about Stafford yet. Not getting any snaps in the preseason as well as being limited in practice due to an elbow injury (that may or may not be fully healed—also something to monitor) definitely played a role in the offensive performance. When you bring in a new receiver like Robinson, it takes time for the rapport to be built. Unless the elbow injury lingers, I wouldn’t be worried about the Rams signal caller yet.

…but the offensive line for the Rams is a major issue
Man, this was a performance to forget for the Rams offensive line. After losing Andrew Whitworth to retirement and Austin Corbett to the Panthers, the Rams had to replace two of their top five linemen from an offensive line that was already around league average. Add in top draft pick Logan Bruss tearing his ACL in the offseason and you no more parties in LA up front.

The Rams allowed seven sacks, and a lot of the pressure came from the interior, where center Brian Allen and guards Coleman Shelton and David Edwards were overwhelmed by the Bills defensive front. A key part of Los Angeles Super Bowl run was Matt Stafford being able to make plays and dice defenses from out of the gun, specifically in empty formations. The Rams tried that tonight, but Stafford was immediately under pressure from the interior, nullifying any time to make a play. The Rams had to go under center to more play action passing game just to buy Stafford some time.

The Rams offensive line was a major question mark entering the year, and based on their performance tonight, that won’t be changing anytime soon.