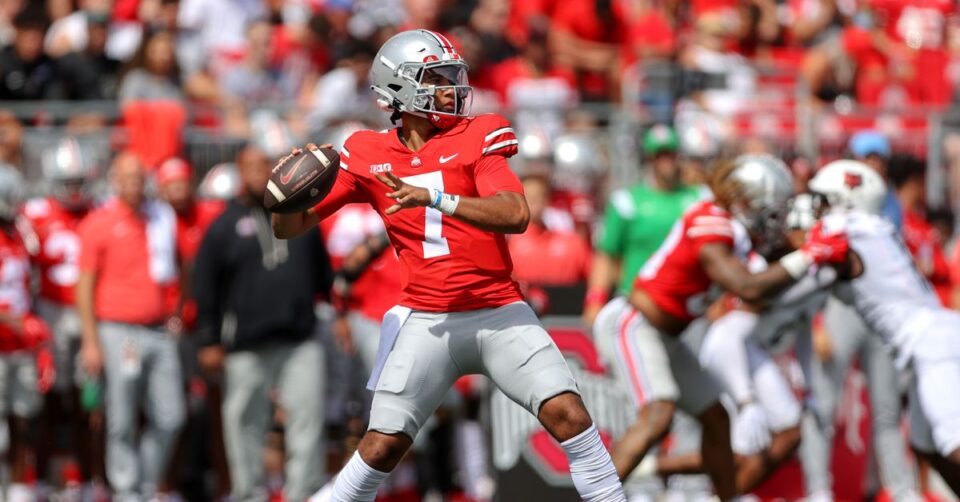 The life cycle of a draft-eligible quarterback prospect can often be measured in weeks, not months.

A little over a year ago, those two passers entered the 2021 college football season as the near-consensus top prospects at their position. Hopes were high that Rattler and Howell would be the quarterbacks to fly off the board early in the first round of the 2022 NFL draft.

That changed almost overnight, as both struggled early in the season. Evaluators moved on from them quickly, turning their attention to Kenny Pickett as the “riser” of the 2022 class, and by season’s end, Rattler was leaving Oklahoma for South Carolina and the SEC, and Howell was seeing his stock plummet to the fifth round.

This summer’s scouting season saw two names: C.J. Stroud from Ohio State and Bryce Young from Alabama, in the same position. Both are viewed by many as the near-consensus top prospects at the position. But when Stround got off to a slow start in the first week of the season, as the Buckeyes got past Notre Dame by a final score of 21-10, there were rumblings that it could be happening again.

Stroud took a big step towards silencing those rumblings on Saturday, leading Ohio State to a 45-12 victory over Arkansas State. In the win, Stroud hit on 16-of-24 passes for 351 yards and four touchdowns, showcasing some of the traits that keep evaluators intrigued about what he could be at the next level.

The passer got going early, and on this second down connection with Marvin Harrison Jr., Stroud showed the ability to hang in the pocket – and in the face of pressure – and deliver a perfectly-thrown ball in the vertical passing game:

Stroud connected with Harrison again with time winding down in the third quarter, and once more you get a chance to see the quarterback deliver with pressure in his face, as he attacks along the left sideline:

What stands out about this throw is how well Stroud both manages the pressure off the left edge, and delivers this throw against the coverage while using his eyes. At the snap Stroud flashes his eyes to the right, but as he hits his drop depth in the pocket Stroud flashes his eyes back to the left sideline. He then shows off his arm talent as he puts enough velocity on the throw to beat the safety racing over from the middle of the field, but also has the right trajectory on the ball to get the pass over the cornerback in coverage.

The throw from Stroud that stands out the most came earlier in the game, as he again connected with Harrison on a touchdown:

One of his strengths as a passer, and something to remember as we get deeper into draft season, is how effective he is at making decisions in the presnap phase of the play. Before this ball is snapped, Stroud knows exactly where he is going with the football. With Harrison flexed wide to the right, and the cornerback using inside leverage and giving a cushion, the receiver has a free release off the line and the advantage to the outside. With the safeties aligned well in the middle of the field, Stroud knows that Harrison is going to get open downfield, and that the cornerback will be at a disadvantage on this play. This is a prime example of Stroud taking information in before the snap, and putting it to his advantage as the play begins.

Of course, these are the kinds of numbers, and plays, you want to see from Stroud and the Ohio State offense against an opponent like Arkansas State. Still, after a slow start a week ago, Stroud needed to have this kind of showing to stem the tide after his outing against Notre Dame.

He did just that on Saturday.

Russell Wilson’s breakup with Seahawks and arrival to Broncos, explained