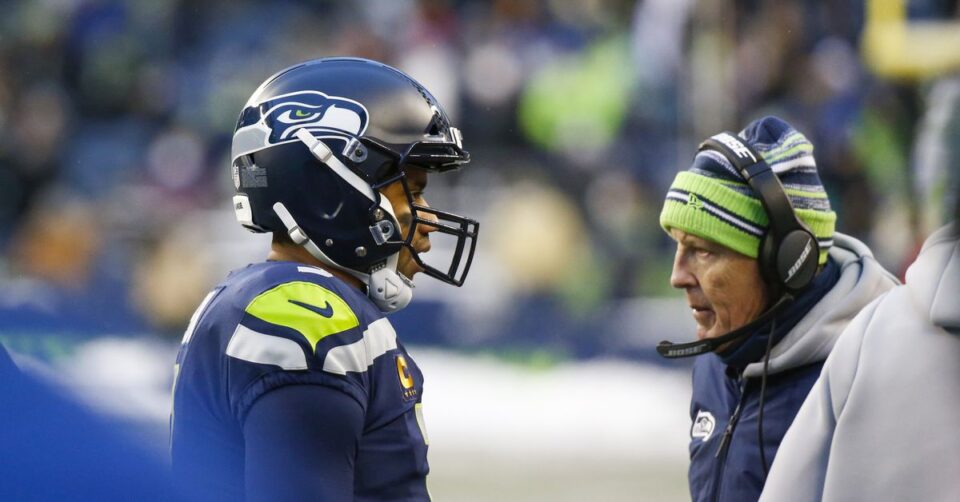 Russell Wilson and the Seahawks were supposed to be inseparable. After being drafted by Seahawks in 2012, Wilson would set records for the Seahawks including being the current leader in career passing yards, passing touchdowns and games played as the Seahawks signal caller. He also won a Super Bowl with the Seahawks and made another Super Bowl a few years later.

So, what happened? Why is Wilson suiting up for the Denver Broncos instead of the Seahawks on Monday night?

Russell Wilson and the Seahawks’ “philosophical differences,” explained
We’re all aware of the Let Russ Cook campaign. In the ESPN story written by Brady Henderson, Henderson notes that the Seahawks have historically been a run-heavy team while Wilson was under center. From 2012, when Wilson was drafted, through 2019, the Seahawks were 29th in early down passing rate.

The Let Russ Cook movement started in 2020, when Wilson, Seahawks head coach Pete Carroll and then-offensive coordinator Brian Schottenheimer decided to run the offense through Wilson. According to The Athletic’s Ben Baldwin’s RBSDM site, the Seahawks had the second-highest early down passing rate in the entire league over the first five weeks of the 2020 season. This led to Wilson throwing 19 touchdowns and establishing himself as the MVP front runner.

However, the ingredients would run out and Let Russ Cook would leave a bad taste in people’s mouths over the next four games of the season. Wilson would commit 10 turnovers, the Seahawks would go 1-3 and Carroll took the chef hat away from Wilson. Carroll explained the shift back at a press conference in 2020, which Henderson outlined.

“Early on [this season] when we didn’t have to run the ball much because we were rolling throwing the football, those guys were out there and we almost took it for granted,” Carroll told reporters as he signaled the shift back. “I’m disappointed about that because that’s the element of our football that makes us this style of team that we are, and it makes Russ’ job different than it is when he has to throw the ball 40 times or 50 times. He certainly can do it and loves doing it and we don’t mind doing it, but our football is better shaped when we’re balanced and we’re attacking you and we can play off of that. It fits the defense; it fits the special teams. It’s the statement of the way we play.”

These philosophical differences would lead to a tug of war between Carroll and Wilson, hiring different offensive coordinators in order to appease both QB and head coach. Ultimately, the battle between the two ended with Wilson now playing for the Broncos.

The Seahawks questioned Russell Wilson’s longevity
In Henderson’s story, he notes that Seahawks GM Jon Schneider was in attendance at both Patrick Mahomes’ and Josh Allen’s pro days in 2017 and 2019, respectively. The process of thinking about life after Wilson was already underway, and according to a front office source, Wilson’s camp was, “f——ing pissed”. At the time, Wilson was 29 years old and coming off a season where he led the NFL in touchdowns when Schneider went to Texas Tech to watch Mahomes. Being a small QB was already a hurdle Wilson needed to get over, but that and his playing style did put a cap on Wilson’s longevity, at least according to some scouts.

After the 2021 season, Henderson noted that some people in the Seahawks front office believed that Wilson was done being an elite QB. Sources within the story called Wilson a “declining player,” and 2021 definitely didn’t help his case. Wilson missed three games due to a broken middle finger, and post-injury he didn’t look the same, averaging less yards per attempt and a lower completion percentage.

Wilson’s game has always been predicated on the deep passes. If the deep ball is the NFL equivalent of the 3-point shot in the NBA, Wilson is Klay Thompson, seemingly catching fire and becoming unstoppable. However, if the shot isn’t falling, his game becomes more predictable and a lot less fun. Wilson holds the ball a for a long time (before 2021’s injury year Wilson never ranked below 12th in the Next Gen Stats’ time to throw metric). Wilson could get away with this because of how mobile he is, but as he ages, that mobility will begin to wane.

When the Seahawks traded Wilson to Denver for Drew Lock, Noah Fant, Shelby Harris and multiple draft picks, it became the end of an era. It also led to a new contract extension: Wilson and the Broncos agreed to a 5-year, $245 million deal that tops what Mahomes got from the Chiefs. The Seahawks never wanted to give him that type of money on this deal.

How to Prepare the Next Generation to Run the Family Business