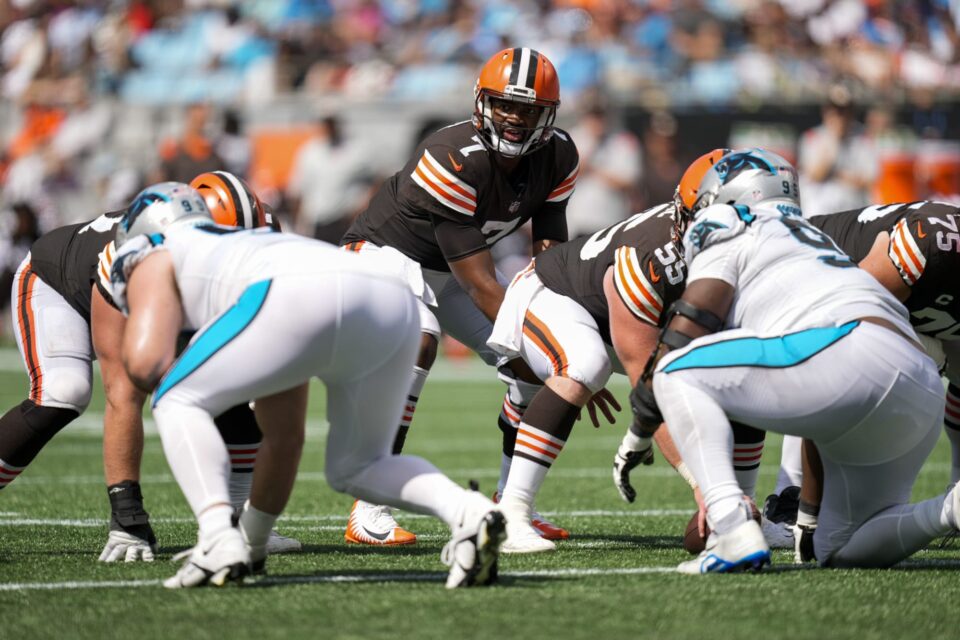 The Browns’ victory over the Panthers was shrouded in controversy after referees botched a late call that would have prevented Cleveland’s game-winner.

We aren’t even through one full week of NFL action and the referees have already impacted the result of a game.

The Browns and Panthers came together for one of the more intriguing matchups in Week 1 considering Baker Mayfield’s connection to the former while quarterbacking the latter.

However, a missed call overshadowed the grudge match, allowing Cleveland to win the game 26-24, taking the lead on a 58-yard field goal with eight seconds remaining.

Before the kick, Browns QB Jacoby Brissett appeared to fake a spike before going through with the motion to stop the clock and set up the kick attempt.

The Browns shouldn’t have been able to kick game-winner over PanthersThe referee stated it clear as day: “The player faked the spike and then threw the spike.”

That’s, by the definition, against the rules.

As Will Brinson pointed out, the rule specifically addresses spikes and fake spikes:

“A passer, after delaying his passing action for strategic purposes, is prohibited from throwing the ball to the ground in front of him, even though he is under no pressure from defensive rusher(s).”

Brisset delayed his passing action while a Browns receiver began to run a route. It’s indisputable that Cleveland intended to run a fake spike play.

The game-winning kick would have had to be 68 yards. The longest field goal in NFL history was 64 yards.

The ruling essentially changed the outcome of the game, short of record-breaking field goal or a Cleveland Hail Mary completion.

After the game, referee Brad Rogers gave an incoherent explanation as to why they ruled the way they did.

“After discussion, we determined that stepping back does not disqualify the quarterback from spiking the ball and we allowed him to do that by rule,” Rogers said.

Except he said the opposite when announcing the ruling. Remember? “The player faked the spike and then threw the spike.”

That explanation doesn’t hold water and only makes this whole situation look worse.