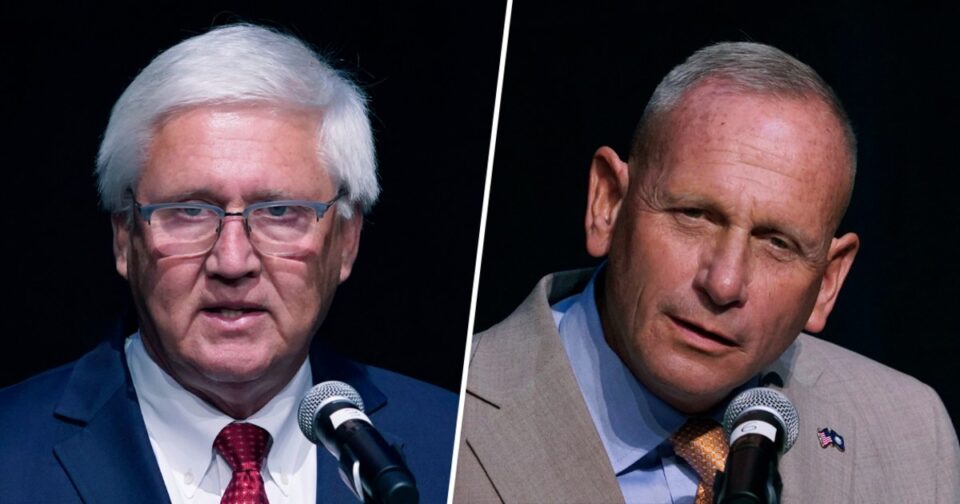 Voters in New Hampshire will cast ballots Tuesday in the final Senate primary before November’s midterm elections — an intramural Republican fight that has become a national battleground for political groups wrestling for partisan control of the chamber.

The GOP contest to determine who will challenge Democratic Sen. Maggie Hassan, who faces marginal opposition in her primary, features a classic clash between insider and outsider.

State Senate President Chuck Morse has an endorsement from Gov. Chris Sununu and more than $4 million in air cover from a group with ties to establishment Republicans in Washington, D.C.

Retired Army Brigadier Gen. Don Bolduc has promoted 2020 election conspiracies, has a reputation for incendiary rhetoric and reported only $84,000 in his campaign war chest at the end of August.

But Bolduc also has a Democratic group doing his dirty work, spending more than $3 million to tag Morse as a yes-man for Senate GOP Leader Mitch McConnell, a villainous figure to many Republicans loyal to former President Donald Trump. And Bolduc has a double-digit lead over Morse and the other candidates in the race, according to the most recent polls.

Another candidate in the race, former Londonderry town manager Kevin Smith, observed last week that the race had become a binary choice distasteful to many Republicans.

“Chuck Schumer, he’s gone all-in with millions of dollars for Don Bolduc, because we know he’s the weakest candidate to take on Maggie Hassan,” Smith said at a televised GOP debate, referring to the Senate Democratic leader whose aligned super PAC is spending the money on the anti-Morse ads.

Republicans also will pick nominees Tuesday in New Hampshire’s 1st and 2nd Congressional Districts, both of which are represented by Democrats seeking re-election in contests that could be competitive this fall. Delaware and Rhode Island are holding primaries for several state and federal races, as well.

In the fight for the New Hampshire Senate seat, Bolduc and Morse would both face tough odds against Hassan in November. The incumbent reported $7.3 million on hand at the end of August — more than 86 times the cash Bolduc had, and more than 12 times the $582,000 that Morse reported. And given New Hampshire’s late primary, the Republican nominee will have less than two months to campaign against Hassan.

But an August poll from Saint Anselm College found a majority of voters disapprove of Hassan’s performance, suggesting vulnerability. And at the national level, both parties view New Hampshire as a top-tier race this fall.

Through Tuesday, Hassan and One Nation, a Republican group that has run ads criticizing her, have been the biggest advertising buyers in the Senate race, at about $9.8 million each, according to AdImpact, an ad-tracking firm. Morse has spent about $821,000 on ads, Bolduc around $14,500.

It wasn’t supposed to be like this for Republicans. Sununu, a popular and relatively moderate governor whose family is well known in state and national politics, was a top recruitment target for McConnell and gave serious thought to running. But Sununu passed, leaving the GOP without a heavyweight contender. Bolduc, meanwhile, has name recognition from his failed run in a 2020 Senate primary — and he never really stopped running for the job after that.

“I’ve been campaigning for two years now,” Bolduc said at a debate last week. “Over these two years, I’ve visited every town and city. I know you’re hurting. I share it with you. I know you’re paying too much money for everything. I will go to Washington, D.C. as your ambassador to work hard to change this. I will give you a voice — a voice that you do not have now.”

“We’ve been doing the little things with a little money — but it’s him, it’s the hustle,” Wiley said.

Morse has relied on his experience, falling back in debates on his work on specific legislation. Sununu’s endorsement, issued Thursday, may have come too late to help much, but Morse leaned into it heavily that night at the candidates’ final debate before the primary.

“I’m honored to have the endorsement of Gov. Chris Sununu,” he said. “As Senate president I worked with the governor to deliver the most conservative budget in the state’s history.”

Trump, despite wading into other key primaries this year, stayed out of New Hampshire — even as Republicans there urged him to take sides. Bolduc is viewed as the more right-wing base candidate, the one most attuned to Trump’s movement. He has called Sununu, a Trump critic, a “Chinese Communist sympathizer.” He has advanced debunked claims that voter fraud cost Trump re-election. And he questioned the need for the FBI after the agency searched Trump’s Mar-a-Lago home. But Bolduc also has been critical of the former president, namely in 2020, when he accused Trump’s political operation of “rigging” that year’s Senate primary against him by endorsing eventual nominee Corky Messner.

Morse presents himself as a more traditional fiscal conservative and has not leaned into the election-denying conspiracy theories that other Trump allies have. After a debate last week, he told reporters he would not have objected to certifying President Joe Biden’s victory.

Sununu, who is seeking a fourth consecutive two-year term as governor, is expected to win renomination easily in his primary campaign Tuesday. He would face state Sen. Tom Sherman, who was unopposed in the Democratic primary, in the general election.

Republicans tried to sidestep the issue of abortion. Now they’re seeking a reset.

Sailor killed at Pearl Harbor to be laid to rest, at last