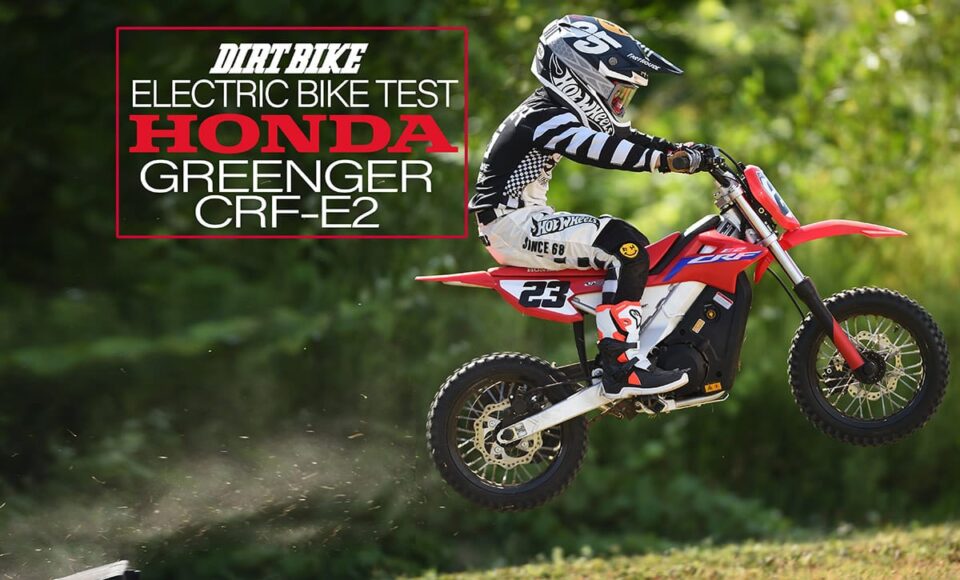 The CRF-E2 is a brand-new electric motorcycle model that comes from a licensing deal between American Honda and Greenger Powersports. Now, this is not your normal licensing agreement where one company just put their name on an existing product and called it good. Greenger and Honda went more of the collaboration route, building the CRF-E2 and making sure it had features important to both manufacturers for the end user. The CRF-E2 is the very first motorcycle in Honda’s history targeted at the youth electric market.

Austin Tilley at the controls of our CRF-E2 test unit.
THE GOODS

First things first, the CRF-E2 is not designed as a race bike. This model is designed to complement Honda’s recreational and trail lines that includes the CRF250F, CRF125F, CRF110F and the CRF50F models. The second “F” stands for “family.” Honda’s major goal with the CRF-E2 is to provide a practical but exciting introduction for new, younger riders to the powersports industry.

The CRF-E2 looks like a Honda race bike but has a very simple overall design that is easy for just about anyone to understand.
The CRF-E2 is powered by a 48-volt BLDC electric motor that features an inner rotor, producing a maximum output of 3.4 horsepower and 18.4 pound-foot of torque. The lithium-ion battery providing power to the electric motor is designed to produce a usage range of approximately two hours in ideal conditions with a full charge. The battery can be fully charged in four hours using the provided charging system.

The rear shock has rebound and compression damping adjustments, while the frame has two different mounting options altering the overall seat height.

A quick-charge system is also offered at an additional cost and is capable of obtaining a full charge in two and a half hours. The CRF-E2 battery can be removed very fast and easy without any tools. A handlebar-mounted display screen allows users to monitor battery life, mode selection and any error codes that may pop up.

The handlebar-mounted display screen allows the rider to monitor battery life, speed and any error codes with just a glance.
REAL TALK

Like we said before, Honda and Greenger did not intend the CRF-E2 to be used as a race bike, and they designed it accordingly. Overall, they did a great job. The CRF-E2 has plenty of adjustability. Multiple rear-shock mounting positions, on-the-fly lever-position adjustment and optional power-delivery modes make it easy to tailor to a wide variety of riders.

The battery can be removed without tools and only takes a minute, so having an additional battery charged and ready at all times is a realistic option.
Initial power delivery is a bit on the abrupt side and made some of our test riders a little gun-shy at first but this is a common complaint of most electric machines on the market today. Although the braking systems on the CRF-E2 look a little large and out of place, they work very well.

One really cool feature on the CRF-E2 is what we like to call the “reserve option,” which is when the battery dips down to a certain level flashing code E081 on the display screen and the power is then restricted, letting the rider know it’s time for a recharge. But, it still has a limited amount of battery life available to return to camp. We are all about not having stranded kids or having to push a dead electric bike anywhere. As for styling, Honda and Greenger absolute nailed it on the CRF-E2; it just looks cool.