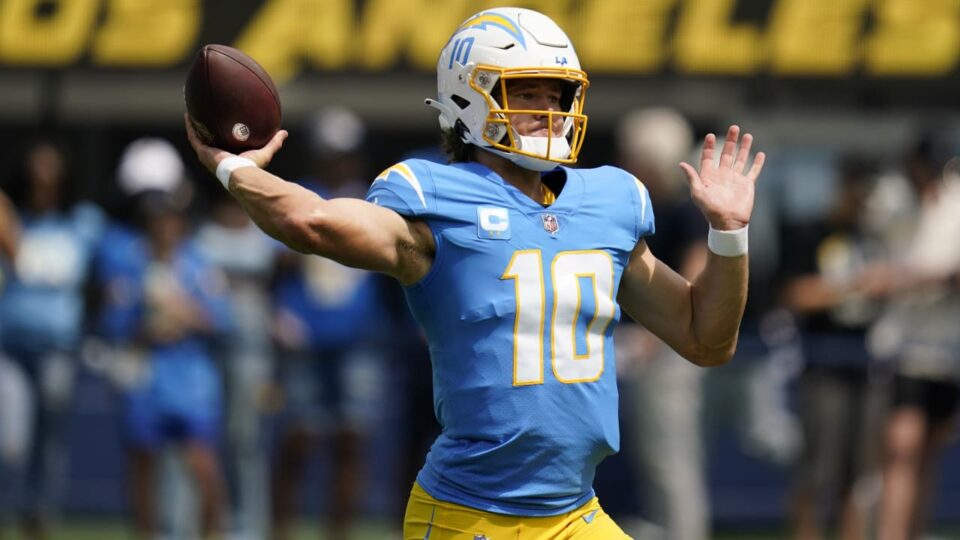 Itching to watch an underdog try to overcome the odds or triumph against adversity? Simply looking to pass the time reading another NFL.com article while stuck in your cube? Nick Shook offers a bead on five us-against-the-world scenarios to track entering Week 2 of the 2022 NFL season. The order below is determined by confidence rankings, from No. 1 (most confident) to No. 5 (least confident).

Everyone gather around, link arms and take a deep breath. It’s not the end of the world.

The end of Week 1 marks the peak of overreaction. The start of the NFL’s regular season provides us with the first legitimate football action since the end of the previous Super Bowl, and with it comes hot takes, knee-jerk responses and fears of doomsday.

But it is not. Week 1 is merely a week … and Week 2 brings new opportunities to all 32 teams.

As with every week, we have 16 underdogs to choose from. Here are the ones I believe in most.

The lines below provided by DraftKings are current as of 2:45 p.m. ET on Wednesday, Sept. 14 unless otherwise noted below.

WHERE: GEHA Field at Arrowhead Stadium (Kansas City)WHEN: 8:15 p.m. ET on Thursday | Prime VideoSPREAD: Chargers +4.5The AFC West is advertised as being the best and most rugged division in football this year, but history appears to be on Patrick Mahomes’ side: The superstar owns a 21-3 record against AFC West opponents. That said, two of those three losses have come against the Chargers, and only one quarterback has defeated Kansas City twice since the start of the 2020 season: Justin Herbert.

Sure, the Chiefs rolled over the Cardinals in Week 1, and they certainly looked impressive on both sides of the ball. They’re going to be a force in the league again this year, but if there’s one team that is primed to take them down while the season is still in its infancy, it’s the Chargers. Los Angeles will likely be without Keenan Allen (hamstring), but that’s OK: Herbert connected with nine different targets in Los Angeles’ Week 1 win over the Raiders. He’ll have options. This one promises to be a doozy.

WHERE: Caesars Superdome (New Orleans)WHEN: 1 p.m. ET on Sunday | FOXSPREAD: Saints +2.5You know what they say: Throw the records out when it comes to rivalries. Both of these teams enter Week 2 at 1-0 and feel good about their season-opening wins, but they came in vastly different fashions. The Buccaneers gradually built a lead in an underwhelming Sunday night win over Dallas, while it took the Saints two and a half quarters to find their offensive rhythm in a comeback victory over Atlanta. I expect New Orleans to attempt to carry that momentum into Week 2.

The only problem: The Saints are facing a much better defense. That’s not the key detail influencing my take on this matchup, however. It’s the other defense — New Orleans’ unit — that might be the difference-maker in this one.

New Orleans is a perfect 4-0 versus Tampa Bay in the regular season since Tom Brady moved south, and the Saints have caused plenty of problems for the greatest quarterback in history. He owns a passer rating of just 71.5 and a touchdown-to-interception ratio of 6-8 in regular-season meetings with the Saints, who have repeatedly stymied the G.O.A.T. and rode their takeaways to a handful of victories. Brady owns a 25-5 record against all other opponents and is quarterbacking an offense that averages 32.3 points per game since 2020, but the Buccaneers have scored just 13.3 points per game against the Saints in that span. Dennis Allen, the new head coach of the Saints, is the same man who coordinated those defenses that shut down Brady.

New Orleans’ offense is chock-full of weapons, and Michael Thomas appears to be all the way back. As long as Jameis Winston can avoid the crushing turnovers that punctuated much of his career with the Bucs, the Saints have a realistic chance of taking down the Bucs and making a statement early.

WHERE: MetLife Stadium (East Rutherford, N.J.)WHEN: 1 p.m. ET on Sunday | FOXSPREAD: Panthers +2The Giants shocked the football world with their comeback win over the Titans in Week 1, and it was apparently so stunning, it’s made them a favorite in Week 2. Life certainly comes at you fast.

Saquon Barkley looks the best he has since tearing his ACL in 2020. I won’t say he’s all the way back, but it’s promising, and the Mike Kafka-directed offense provided more of a spark than many expected last weekend. There are plenty of reasons to believe in the Giants despite the low expectations set for them entering this season.

But it’s also a Week 2 game. Those in charge of determining favorites and underdogs may have had one too many sips from the chaotic well that was Week 1.

Baker Mayfield looked pretty terrible in the first half of Carolina’s Week 1 loss to Cleveland, but he also nearly led the Panthers to a thrilling comeback win. Carolina has enough weapons to go win a game, but the Panthers must get Christian McCaffrey more involved after he had just 14 touches against the Browns. McCaffrey could cause headaches for the Giants’ defense, which doesn’t feature a havoc-wreaker like the one Mayfield’s Panthers faced in Myles Garrett. If Carolina can play a full game like it did the final two quarters of Week 1, it has a good shot to take this road game.

WHERE: Acrisure Stadium (Pittsburgh)WHEN: 4:25 p.m. ET on Sunday | CBSSPREAD: Steelers +2This one feels like a bit of a toss-up, and for good reason. The injury bug bit both of these teams in Week 1, although it sounds as if the Patriots managed to escape with a better outlook for their banged-up key player, Mac Jones, than the Steelers did with T.J. Watt.

It appears Watt avoided the worst possible outcome with his pectoral injury, but, unfortunately, Pittsburgh’s defense — which was ferocious in the first half of the Steelers’ overtime win over the Bengals — will have to go without the reigning Defensive Player of the Year on Sunday.

Pittsburgh still has standout defensive contributors — Cameron Heyward, Alex Highsmith and Minkah Fitzpatrick all played key roles in Week 1 — who must be salivating at the thought of pressuring Jones — even if he’s “feeling better” from the back spasms he experienced in the season opener. A week after forcing Joe Burrow to commit a career-high five turnovers, Sunday’s matchup must look like a steak dinner to these Steelers, who are preparing to face a Patriots offense that mustered just seven points in a Week 1 loss to Miami.

I must share a bit of bad news, though: The Steelers haven’t won a game without Watt in the starting lineup (0-4) since he joined the team in 2017.

This one might come down to Pittsburgh’s offense, which was far from perfect last weekend. Making matters worse, Najee Harris is dealing with a foot injury, although he has said he will play on Sunday. If the second-year RB is at less than full strength, Mitch Trubisky will have to account for a larger portion of Pittsburgh’s offense than he did in Week 1. Fortunately for Pittsburgh, Trubisky is one of the winningest quarterbacks in games in which his team scores fewer than 24 points (12 wins) since he entered the league in 2017 — second only to Ben Roethlisberger (16).

Trubisky also knows what it’s like to win without a key defensive teammate available: The Bears won both of the starts he made while Khalil Mack was sidelined in 2018. It’s time for Mitch to channel his inner Big Ben.

NFL QB Index, Week 2: Josh Allen claims the No. 1 spot, but Patrick Mahomes is hot on his heels

‘I Didn’t Want to Be a Businessman’: Patagonia’s Founder Just Gave Away His $3 Billion Company