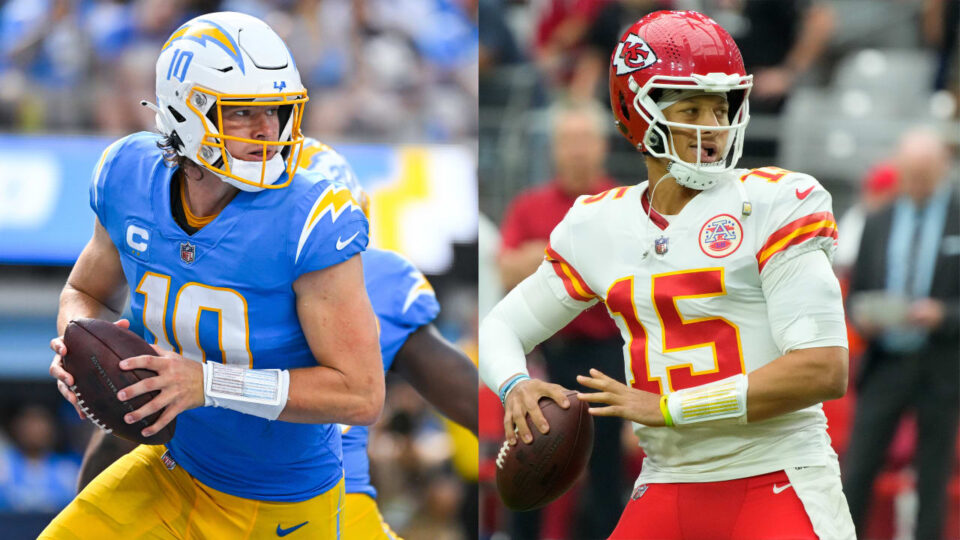 WHERE: GEHA Field at Arrowhead Stadium (Kansas City)WHEN: 8:15 p.m. ET | Prime Video, NFL+Thursday night could get the ball in motion on two huge 2022 season races — the AFC West battle and the MVP award. That’s because the division-rival Chargers and Chiefs are set to clash at Arrowhead Stadium to kick off Week 2, and that means we’re once again being treated to quarterback royalty.

Patrick Mahomes gave everyone a refresher course on his greatness in dismantling the Cardinals on the road in Week 1, while Justin Herbert was pretty lethal in the Chargers’ hang-on-for-dear-life win over the Raiders.

The Chiefs have won 13 of the their last 16 games against the Chargers, including a Week 15 Thursday thriller last season at SoFi Stadium, but Los Angeles has taken two straight in Kansas City.

Which AFC heavyweight will come on top in this one? Even with all the offensive firepower on the field, it could come down to which new-and-improved defense steps up the most.

Mahomes vs. Herbert. No sense in messing around. This is what you came for: Possibly the best QB matchup of the season — and their next meeting isn’t until late November. Mahomes might be coming off his worst season in 2021, but he was the league’s best QB on Sunday. Trying to knock him off that perch is Herbert, who was exceptional at times in the opener, too. Both quarterbacks have to be considered among the league’s MVP frontrunners, early as it might be, right alongside the Bills’ Josh Allen. This is the fourth meeting between Mahomes and Herbert, with Mahomes leading the battle, 2-1. Each of those games have been decided by six points or fewer, all coming down to the final play of the game (two in overtime). Neither has played poorly against one another, although Mahomes’ two INTs in the loss at Arrowhead last year were costly. Still, you simply cannot ask for a better head-to-head battle at the position. No one should overlook how special these players are, both currently in their primes.Which defense will make the bigger statement? The Chargers played without prized free-agent signee CB J.C. Jackson in Week 1, but the defense’s other big addition was lights out. Khalil Mack’s return to the division was a raucous one, as he had three sacks (his first three-sack game since 2015), four QB hits and a forced fumble. Together, Mack and Joey Bosa put the Raiders’ offensive linemen on skates most of the day, helping the defense register a whopping 22 pressures, six sacks, three interceptions and a game-ending turnover on downs. The Chargers have very good talent on all three levels, but they would love to have Jackson make his debut after Michael Davis had some rough patches in the opener. The Chiefs defense was exceptional on the road last week through three quarters before going into prevent mode, up 30. Cornerback L’Jarius Sneed, linebacker Nick Bolton and defensive tackle Chris Jones all had strong games, but so did new pass rushers Carlos Dunlap and George Karlaftis, who both supplied heat. The Chiefs arguably have the stronger offensive line, but the Chargers’ pass-rush group looks lethal. Can either defense slow down these high-powered offenses?The injury factor. Thursday night games are always quick turnarounds for players, but especially for the injured ones. Chiefs kicker Harrison Butker (ankle) has been ruled out versus the Chargers, and K.C. will also be without rookie corner Trent McDuffie after going down with a strained hamstring in Week 1. McDuffie played well in his 21 snaps (not targeted once by Kyler Murray), but will miss the next four weeks after he was placed on injured reserve Tuesday. The Chiefs signed Matt Ammendola this week as insurance and is set to kick for the Chiefs. He was 6 of 6 on FG attempts 39 yards or shorter with the Jets last season but only 2 of 8 beyond 40 yards. The Chargers could have Jackson (ankle) for this game after he missed Week 1, but head coach Brandon Staley put the odds at 50-50 on Monday; he’s officially questionable to play. They’ll be without wide receiver Keenan Allen (hamstring), however. That’s a big loss, as Allen typically gives the Chiefs fits.Spreading the ball around. Many wondered how Mahomes would perform in his first game without Tyreek Hill. The answer: just fine. The Chiefs had six players with three or more catches against the Cardinals, which was tied for the second-most pass catchers with Mahomes at QB. Travis Kelce still did his thing with eight grabs, 121 yards and one TD. But the newcomers and holdovers alike also stood tall. The hyphen twins, JuJu Smith-Schuster and Marquez Valdes-Scantling, both had good Chiefs debuts. Rookie Skyy Moore had a 30-yard grab, Clyde Edwards-Helaire had his first two-TD receiving game and Mecole Hardman and Jody Fortson both caught TDs. After Allen got hurt in the opener, Herbert spread the ball around as well — nine different Chargers caught passes but none had more than four targets. If the Chiefs can shut down Chargers back Austin Ekeler as a runner, as the Raiders did last week, expect him to be unleashed more as a pass catcher, as he was in the second half of Week 1. With both secondaries at less than 100 percent, there could be a lot of mouths that are fed through the air in this contest.
Read More