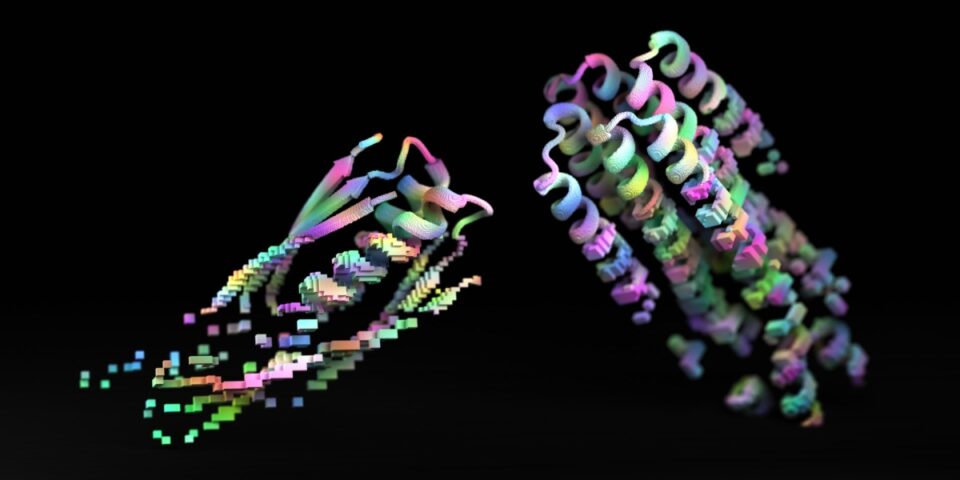 What’s happened?: A new AI tool could help researchers discover previously unknown proteins and design entirely new ones. When harnessed, it could help unlock the development of more efficient vaccines, speed up research into cures for cancer, or lead to completely new materials.

How it works: ProteinMPNN, developed by a group of researchers from the University of Washington, offers scientists a tool that will complement DeepMind’s AlphaFold tool’s ability to predict the shapes of all proteins known to science. ProteinMPNN will help researchers with the inverse problem. If they already have an exact protein structure in mind, it will help them find the amino acid sequence that folds into that shape.

Why it matters: Proteins are fundamental to life, and understanding their shape is vital to working with them. Traditionally researchers engineer proteins by tweaking those that occur in nature, but ProteinMPNN will open an entire new universe of possible proteins for researchers to design from scratch. Read the full story.

+ DeepMind has predicted the structure of almost every protein known to science. And it’s giving the data away for free, which could spur new scientific discoveries. Read the full story.

+ This is the reason Demis Hassabis started DeepMind. AlphaFold has changed how researchers work and set DeepMind on a new course. Read the full story.

“Fingerprints” of climate change are clear in Pakistan’s devastating floods

What we know: Climate change very likely intensified the South Asian monsoon that flooded Pakistan in recent weeks, killing more than 1,000 people and destroying nearly 2 million homes. That’s according to a new analysis by World Weather Attribution, a network of scientists who use climate models, weather observations, and other tools to determine whether global warming increased the likelihood or severity of recent extreme weather events.

What we don’t know: Precisely how big a role climate change played isn’t clear. Using climate models to pinpoint global warming’s role in amplifying the full monsoon season has proved tricky, due to some combination of the wide variability in heavy rainfall patterns over long periods, natural processes at work that the models may not fully capture, and the weather quirks of the territory. And the country’s weather is likely to become even more extreme. Read the full story.

1 Uber appears to have been hacked by a teenager
An 18-year old is claiming to be behind the cybersecurity breach, which compromised the company’s internal systems. (NYT $)
+ Meanwhile, its services are working normally for customers. (Bloomberg $)

2 An AI used medical notes to teach itself to spot disease on chest x-rays
Teaching AI models to read existing reports could save researchers from having to manually label the data. (MIT Technology Review)

3 The US government’s vast database of travelers’ data is growing rapidly
Data from phones and other devices is kept for 15 years. (WP $)

5 Millions of people in India have geotagged their homes
The move, which was part of the country’s Independence Day celebrations, has privacy advocates rattled. (Rest of World)

6 Organic molecules have been found in rocks on Mars
They could prove that life may have thrived there. (Wired $)
+ The microbes may have lived in briny lakes. (Motherboard)
+ The best places to find extraterrestrial life in our solar system. (MIT Technology Review)

7 The most sophisticated AI systems can baffle even their creators
Which is kind of the point of deep learning. (The Atlantic $)

8 Inside the wild world of leg lengthening 🦵
More and more men are willing to have their legs broken to make them appear taller—for a price. (GQ)
+ Bionic limbs could be more widely available within a decade, too. (Neo.Life)

9 TikTok is the new Google
Why trust a restaurant’s website when TikTok shows you what their food actually looks like? (NYT $)

10 The race to slow down aging
Tinkering with a person’s epigenetic age is one place to start. (Neo.Life)
+ Aging clocks aim to predict how long you’ll live. (MIT Technology Review)

—Natasha Hunt Lee, 25, explains why Gen Z is embracing new digital ways of inviting friends to parties beyond the social network to the New York Times.

Two sick children and a $1.5 million bill: One family’s race for a gene therapy cure

Jennie and Gary Landsman launched an online appeal to save their sons on Thanksgiving of 2017. In a moving video, the pair describe how their two sons, Benny, then 18 months, and Josh, four months—both have a fatal genetic brain disorder called Canavan disease. It’s ultra rare—so  rare, in fact, that there is no reliable understanding of how many children are born with it. Relatively few researchers study Canavan, and no drugs are approved to treat it.

The Landsmans refused to accept the doctors’ advice to make their sons comfortable until they died. Instead, they learned: there may be a way to fix the genetic error in the boys’ brains. But the family would have to pay for it themselves. And it would be expensive.

The Landsmans had discovered gene therapy, technology that uses viruses to add healthy genes to cells with defective ones. The technology’s medical logic is especially irresistible for parents of children with the rarest diseases on earth, because it suggests the ultimate bug fix. The problem is: who will pay? Read the full story.

+ If you enjoyed the smash TV hit The White Lotus, The Resort should be right up your alley.
+ Why following your gut isn’t necessarily the path to happiness.
+ Seeing as we’re heading into fall, here’s some of the best horror films on Netflix right now.
+ I didn’t know it was possible to make butter even more delicious, but turns out you can!
+ This Roman coins collection is pretty amazing.

The Download: The Merge arrives, and China’s AI image censorship

Blake Lively Reportedly Pregnant, Says “I Just Like to Create…Humans”