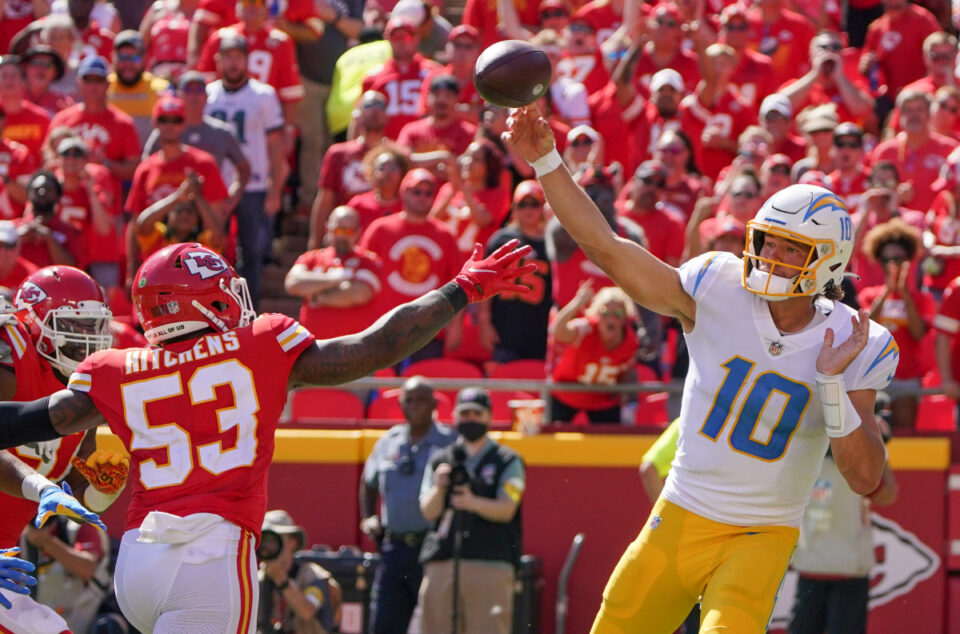 The Chargers take on the Chiefs Thursday night at GEHA Field.

The Chargers and Chiefs will square off under the bright lights of Thursday Night Football in Week 2. After both teams kicked things into gear with opening weekend victories, the winner of tonight’s game will take the early lead for first place in the AFC West.

Here’s a look at the Week 2 pregame report, previewing the Chargers’ matchup against their division rival, Chiefs.

OUT: K Harrison ButkerQUESTIONABLE: G Trey SmithCurrent betting linesPoint spread: Chiefs -6.5Moneyline: Chiefs -213, Chargers +175Over/under: 54 pointsThings to watchChargers pass rush: In Week 1, the Chargers were able to inflict constant pressure on Raiders quarterback Derek Carr, sacking him six times. The Chiefs offensive line looks to stack-up as a stronger group than the Raiders, but the pairing of Khalil Mack and Joey Bosa still figures to create a matchup problem, nonetheless. Mack recorded three sacks in his Chargers debut, and later said that he saw areas of his game in which he left a lot out on the field. Keeping Patrick Mahomes inside the pocket will be a key element for the Chargers pass rush as the Chiefs’ gunslinger is most dangerous when he gets outside the pocket.Containing Travis Kelce: Without Tyreek Hill in Kansas City, Travis Kelce becomes the Chiefs unquestioned No. 1 pass catcher. However, Chargers safety Derwin James has had success in the past of slowing down the league’s top tight end. According to the data of TruMedia, Kelce was held to five catches for 68 yards with James on the field across their two meetings last season. With James off the field, Kelce recorded 12 catches for 227 yards and two touchdowns. James will be deployed on Kelce for the greater part of this matchup.Chargers run game: The Chargers offensive unit finished the game last week with 355 yards of total offense and three touchdowns. But they never got into any sort of rhythm on the ground, finishing the game with 76 yards rushing and averaged 2.5 yards per carry. To strike a more balanced attack in Week 2, they need to get Austin Ekeler and company going early and often.Who steps up with Keenan Allen out?: In a game last week where Allen exited in the second quarter with a hamstring injury, and Mike Williams finished with two catches for 10 yards, Herbert connected for three touchdowns – all with pass catchers who weren’t on the team just a season ago. DeAndre Carter seized his opportunity, catching three passes for 64 yards and one touchdown. Who steps up this week with Allen ruled out? Mike Williams looks to be inline for a big day, Joshua Palmer moves into more of a prominent role and Carter’s snap count should largely increase.More from Charger Report

In This Article (2)Los Angeles Chargers