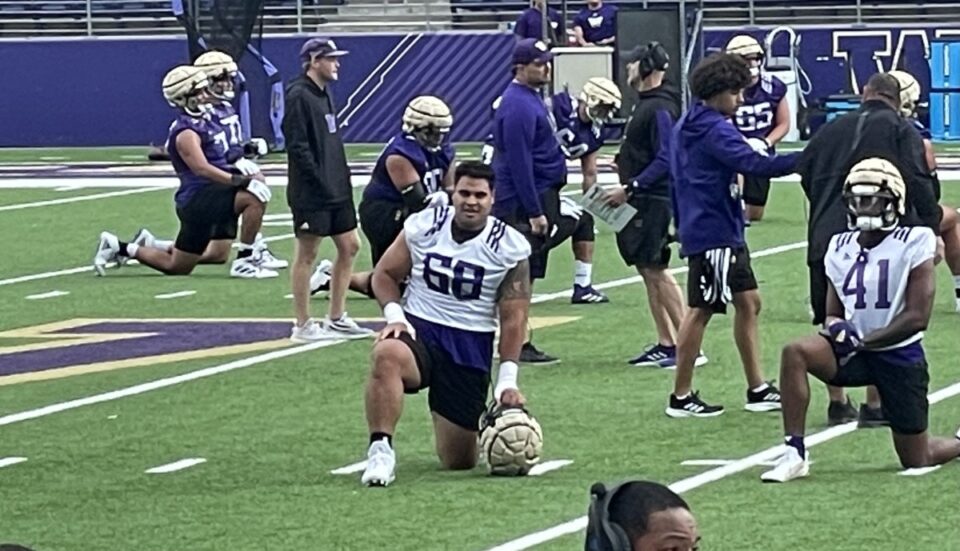 Portland State’s Andrew Van Buren, a stubby 6-foot, 240-pound running back, took the handoff, slammed into the middle of the line and disappeared into a mass of bodies.

On the game’s second play from scrimmage last weekend at Husky Stadium, the visiting rusher gained a solitary yard.

It was just a minor thing, not worthy of pausing the action for grand ceremony or pulling the football from play to be placed on a mantle somewhere, but University of Washington defensive tackle Ulumoo Ale made the tackle.

This was significant for a couple of reasons: 1) the massive 6-foot-6, 340-pound junior, after undertaking a well-publicized position switch, received credit for his first collegiate tackle; and 2) a month earlier, as he lay face down and injured in Dempsey Indoor and required frantic medical attention, the immediate thought that he would be playing this season at all seemed rather stark at that moment.

Yet there was Ale this past weekend, drawing more game snaps than in the opener, and he’s now looking to contribute even more on Saturday afternoon when the Huskies (2-0) entertain the 11th-ranked Michigan State Spartans (2-0) in a nationally televised encounter at Husky Stadium.

Ale’s stat line over two outings after converting from the offensive line to the defensive line is a modest one: he has that close-quarters tackle against Portland State and a fourth-quarter pass deflection against Kent State in which he almost seemed to swallow the football whole.

“We feel good about him,” Husky co-defensive coordinator Chuck Morrell said. “He really started to pop out in practice where his movements and lateral agility were showing up again.”

The Huskies have great hope that Ale ultimately will become a starter and take a prominent role on the defensive line, rather than just make spot appearances to spell others, and repeatedly shut down opposing runners such as Van Buren.

Ale shed considerable weight from 368 pounds to be able to demonstrate his football mobility and satisfy defensive-line coach Inoke Breckterfield. He survived what seemed like a helmet-to-the-knee contusion that appeared much worse than it was and forced him to be carted away to a training room in early August.

He played multiple series against Portland State as he gets closer to regular Husky duty. The school actually listed him on flash cards as the starter that day but he came off the bench. On Saturday, Ale might use Michigan State as his defensive coming-out party.

“We’re confident that it’s time for him to really be able to step into a larger role,” Morrell said. “We were just being cautious with [him] coming off the injury.”

Go to si.com/college/washington to read the latest Inside the Huskies stories — as soon as they’re published.

Not all stories are posted on the fan sites.

Find Inside the Huskies on Facebook by searching: Inside Huskies/FanNation at SI.com