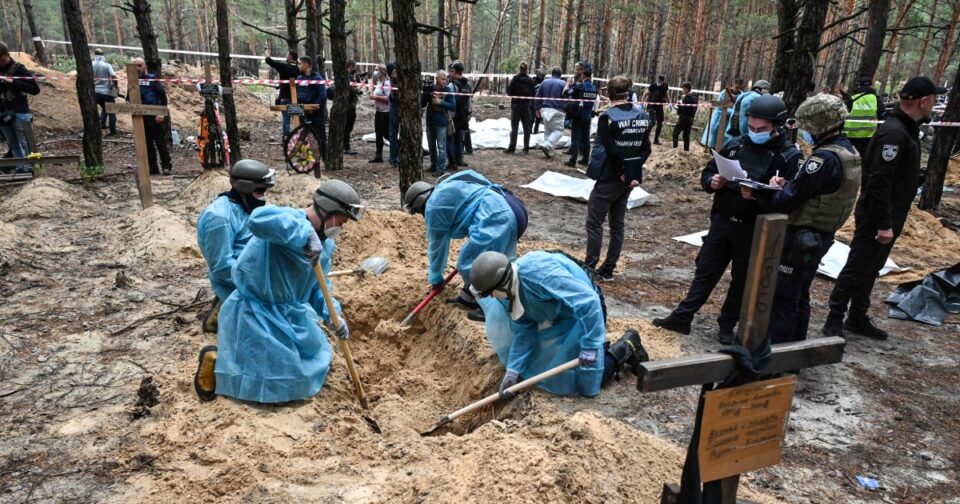 IZYUM, Ukraine — The stench of death hangs over a small forest in northeastern Ukraine.

Already, hundreds of bodies have been retrieved, including those of children, Ukrainian forensic technicians here say.

Here in Izyum, one of 20 towns and cities liberated in the recent surprise Ukrainian counteroffensive, investigators are struggling to keep count of the bodies being recovered from beneath the forest floor.

More than a dozen sweat-soaked workers, wearing bulletproof vests and helmets under their biohazard suits, exhumed bodies from a makeshift gravesite over the weekend, taking frequent cigarette breaks. One worker was seen dry-heaving multiple times.

Police officers and war crimes prosecutors from the Kharkiv Regional Prosecutor’s Office looked on, along with local residents searching for graves as they walked around. None reacted as the sound of bombing was frequently heard in the distance.

Some of the graves bear wooden crosses, inscribed with the names of the dead and sometimes floral tributes. Others have numbers.

But most graves bear no remembrance of the dead.

“They buried the bodies in bags, without coffins, without anything,” Volodymyr Kolesnyk, a resident of Izyum, told Reuters.

At first, he said, he was not allowed to visit the woods — it was too dangerous, the occupiers claimed.

“The Russians said it was mined and asked to wait,” Kolesnyk added. “And there was a lot of them in the woods, so it was scary to come here.”

Although the people of Izyum are now free of their occupiers, they are surrounded by reminders of what happened when the Russians came here in March. There is hardly a building untouched by war, and now they must face the horror of finding their loved ones from among the shallow graves in the forest.

Last week, one officer said, a police officer who took a shortcut through the woods to get to the graves stepped on a landmine, losing a leg.

On Friday, police found one mass grave with the bodies of 17 Ukrainian soldiers. Many had broken bones, hands tied behind their backs and other signs of torture. But civilians have been buried here too.

“More than 10 torture chambers have already been found in the liberated areas of Kharkiv region, in various cities and towns,” Zelenskyy said.

“Bucha, Mariupol, now, unfortunately, Izyum. Russia leaves death everywhere. And it must be held accountable for it,” he added.

The bodies of hundreds of civilians were recovered in April from the town of Bucha, near the capital, Kyiv, after it was recaptured by Ukraine’s military. The Ukrainian government said many of the victims were tortured and killed en masse.

Russia was similarly accused by Ukraine of committing war crimes around the southern coastal city of Mariupol, where a mass grave with as many as 9,000 bodies was found in a nearby village.

Vitaly Ganchev, the head of the pro-Russian administration that abandoned Izyum and the surrounding region following the Ukrainian military advance, accused Ukrainians of staging the atrocities in Izyum.

“I have not heard anything about burials,” he told Rossiya-24 state television.

In an intelligence briefing released on Sunday, the British Ministry of Defense said Russia has most likely extended the locations it is prepared to strike, including civilian infrastructure, in an effort to undermine the morale of the Ukrainian government and people.

Five civilians were killed in Russian attacks in the Donetsk region on Saturday, while in the southern coastal city of Nikopol, several dozen high-rise and private buildings, gas pipelines and power lines were damaged by Russian strikes, the regional governors said separately on Sunday.

Ukraine has also launched a major offensive to recapture territory in the south, where it hopes to trap thousands of Russian troops cut off from supplies on the west bank of the Dnipro River and retake Kherson, the only large Ukrainian city that has remained in Russian hands since the start of the war.

To bolster the offensive, the Biden administration announced another $600 million package of military aid on Thursday for Ukraine, including more of the weaponry that has helped its troops seize the momentum.