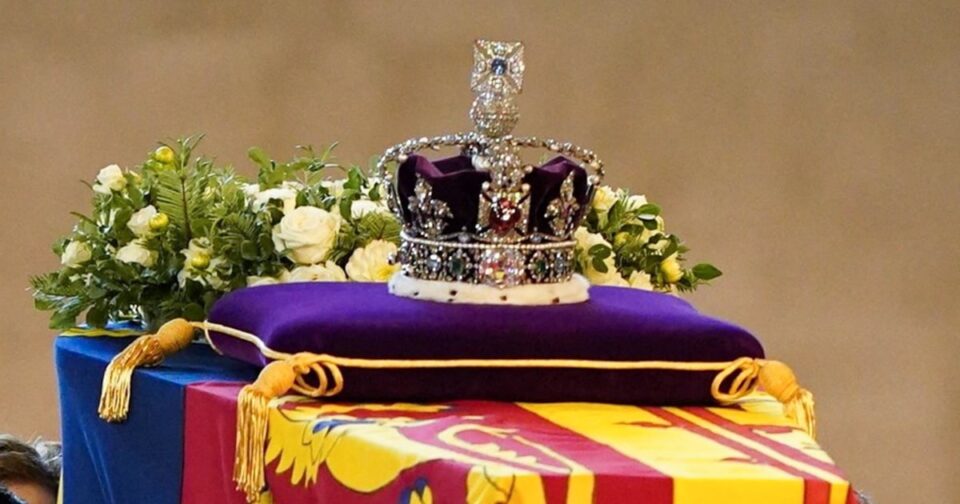 LONDON — Monday marked the end of the second Elizabethan age.

Queen Elizabeth II’s coffin completed its final journey from central London to its resting place at Windsor Castle, after a majestic state funeral at Westminster Abbey where the royal family and world leaders paid respects to the United Kingdom’s longest-serving monarch.

“There’s the queen,” one boy cried out as the crowd on the Long Walk watched the flower-strewn state hearse carrying Elizabeth’s coffin inch its way uphill toward Windsor Castle, accompanied by the booms of cannon fire.

This was what many had camped out for hours to see. And suddenly there was a forest of camera phones held aloft to capture a moment in history that many thought unimaginable during Elizabeth’s 70-year reign.

Members of the royal family were already waiting for Elizabeth at St. George’s Chapel when the hearse arrived around 4 p.m. local time (11 a.m. ET).

And after 10 days of carefully choreographed and very public official mourning, a majestic farewell that was witnessed by millions of her subjects and by billions more people around the world, Elizabeth will be laid to rest relatively privately near her husband, Prince Philip. His body has been moved there recently from the chapel’s royal vault where he was interred after his death last year.

Earlier, tens of thousands lined the Mall in London to watch the procession that followed the funeral, while billions around the world and every corner of what was once the British Empire were expected to watch on television.

The farewell for the monarch — whose 70-year reign began in the aftermath of World War II, outlasted the Cold War, and spanned the dawn of the space race to the ubiquity of the internet — also cemented the rule of its new one, King Charles III.

Her coffin was carried on a Royal Navy gun carriage from the funeral service to the Wellington Arch near Hyde Park. It was then transferred to a state hearse for the journey to Windsor.

Before the funeral service, Westminster Abbey’s tenor bell tolled 96 times, once for each year of Elizabeth’s life, before her coffin was carried inside for a state funeral.

Behind the casket followed her eldest son, Charles, who at age 73 is finally taking the reins of the kingdom.

Then, for the next hour, there were tributes to Elizabeth and hymns that culminated in two minutes of silence observed by those in attendance and across the country.

In his sermon, Archbishop of Canterbury Justin Welby recalled how when Elizabeth turned 21 she vowed, in a radio address to her millions of subjects around the world, to spend her life serving the British nation and the Commonwealth.

“Rarely has such a promise been so well-kept,” he said.

Toward the end of the ceremony at Westminster Abbey, mourners gathered in the ancient edifice sang “God Save the King,” a version of the national anthem that had not been heard there in 70 years.

The service began after the epic line of devoted mourners who had spent four days filing past her coffin was halted, and more than a week of ceremonies steeped in ancient tradition came to a close.

And it was a sendoff that played out on a grand scale.

Some 4,000 military personnel were mustered to parade on the streets of London and Windsor. Tens of thousands, if not hundreds of thousands, lined the streets. Inside Westminster Abbey, the guest list included leaders such as President Joe Biden and France’s Emmanuel Macron, European royals, as well as British doctors and other emergency workers.

The TV audience alone was expected to rival if not surpass the 2.5 billion estimated to have seen Princess Diana’s funeral in 1997.

The day of national mourning got an early start. At 6:30 a.m. (1:30 a.m. ET), the last members of the public were allowed into Westminster Hall to see Elizabeth lying in state. The hall, which was built more than 1,000 years ago, was then closed in preparation for the grandest funeral in British memory.

But there were quiet moments of reflection and intimate remembrances of the only monarch most have ever known.

“It was incredible to be able to come and to be here and to just pay my respects,” said Sima Mansouri, 55, one of the last two members of the public allowed into Westminster Hall. “I’ve adored her since I was a little girl. I moved from the Middle East to the U.S. and then to the United Kingdom for the past 25 years. … I call this place home and she made me feel like I was at home here and safe.”

Shortly after 10:35 a.m. (5:35 a.m. ET), the queen’s coffin was lifted from its platform, known as a catafalque, by members of the British Army’s Grenadier Guards, soldiers whose iconic tall, black busby hats have appeared in a million tourist photographs outside Buckingham Palace.

They placed it on a gun carriage that had been removed from active military service in 1901 to be used for the funeral of Queen Victoria for a procession across Parliament Square.

It’s a journey of barely 500 feet but was conducted at such a solemn pace that it took eight minutes.

The procession was led by some 200 pipers and drummers from Scottish and Irish regiments, as well as Gurkhas —Nepalese fighters who traditionally have fought alongside British troops — and the Royal Air Force.

Flanking the coffin were pallbearers and royal bodyguards while Charles, his wife, Camilla, the queen consort, and other royals walked behind.

Along with Biden and Macron, the list of world leaders in attendance included the leaders of countries that were former British colonies, such as Indian President Droupadi Murmu, South African President Cyril Ramaphosa and New Zealand Prime Minister Jacinda Ardern.

They were joined by more than 180 members of the public identified as key workers, including emergency service personnel and other professionals who were recognized in the queen’s birthday honors list in June.

Toward the end of the hourlong service, the last post bugle call sounded before a lament played by the queen’s piper brought the ceremony to a close.

Elizabeth’s coffin was then taken to the Wellington Arch, flanked again by the same members of the procession and this time joined by members of the Royal Canadian Mounted Police, the Royal Ulster Constabulary from Northern Ireland, and the much-cherished National Health Service.

Alexander Smith is a senior reporter for NBC News Digital based in London.

Corky Siemaszko is a senior writer for NBC News Digital.