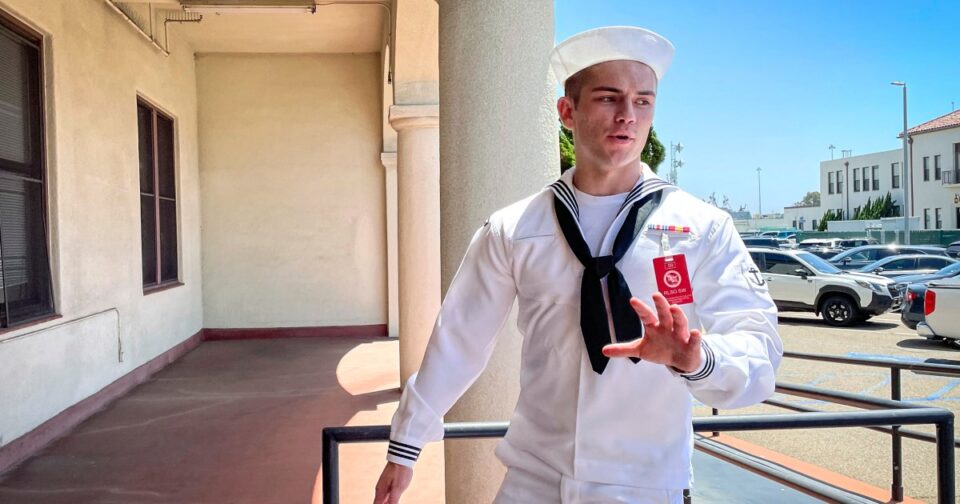 SAN DIEGO — According to prosecutors, Ryan Sawyer Mays was a young, arrogant sailor angry about being assigned to deck duty after failing to become a Navy SEAL — and he made the Navy pay in a big way.

But the prosecution has presented no physical evidence proving that Mays, 21, set the USS Bonhomme Richard on fire, a fact defense lawyers plan to highlight at the sailor’s court martial that is scheduled to start Monday at Naval Base San Diego.

The July 2020 blaze burned for nearly five days and sent an acrid smoke over San Diego, damaging the amphibious assault ship so badly that it had to be scuttled. It marked one of the worst noncombat warship disasters in recent memory.

Mays is charged with aggravated arson and the willful hazarding of a vessel. He has denied any wrongdoing.

Gary Barthel, a civilian lawyer who represented Mays at a preliminary hearing to determine if there was probable cause to send the case to trial, said the Navy judge overseeing that process recommended the case not go to court martial. But Vice Adm. Steve Koehler, the former commander of the San Diego-based U.S. 3rd Fleet, who had the final say, ordered the court martial.

Barthel said the Navy’s case relies largely on the account of a fellow sailor who has acknowledged changing it repeatedly. He said investigators brushed aside the fact that lithium batteries were stored next to highly combustible material such as cardboard boxes, in violation of ship protocol.

Barthel said he offered his services pro bono because he thought Mays would not be court martialed, but he does not have time with his full-time practice to continue to represent the sailor, who is using military counsel. Still, he said he is speaking out because the Navy case is unjust.

“I think there’s some real questions as to whether or not the fire was an arson,” Barthel said. “And if it were deemed an arson, there are questions about whether Ryan Mays started this fire.”

The prosecution’s witness, Petty Officer 3rd Class Kenji Velasco, blamed his nervousness for the changes to his story and said during the preliminary hearing that he was now “100 percent” sure that he saw Mays descend to the ship’s lower vehicle storage area on the day of the fire.

Neither military defense counsel nor the prosecution could be reached for comment.

Barthel believes the Navy is using Mays as a scapegoat rather than admit it was solely the mismanagement by senior officers that led to the loss of the billion-dollar vessel, or acknowledge that they pinned the blame on the wrong guy.

While investigators said Mays set the fire, a Navy report last year concluded that the inferno was preventable and unacceptable, and that there were lapses in training, coordination, communications, fire preparedness, equipment maintenance and overall command and control.

Navy leaders disciplined more than 20 senior officers and sailors in connection with what it described as widespread leadership failures that contributed to the disaster. The Navy spread blame across a wide range of ranks and responsibilities and directly faulted the ship’s three top officers.

The ship was undergoing a two-year, $250 million upgrade pierside in San Diego when the fire broke out. About 115 sailors were on board, and nearly 60 were treated for heat exhaustion, smoke inhalation and minor injuries. The failure to extinguish or contain the fire led to temperatures exceeding 1,200 degrees Fahrenheit in some areas, melting sections of the ship into molten metal that flowed into other parts of the ship.

Retired Navy Capt. Lawrence B. Brennan, an adjunct professor at Admiralty and International Maritime Law Fordham Law School, said the prosecution has its work cut out for it.

“There are questions about identification of the people in the vicinity of the fire and possible causes other than arson,” he said in an email to The Associated Press. “Moreover, the conflagration and firefighting efforts damaged, if not destroyed, the crime scene and crucial evidence.”

The court martial is scheduled to last two weeks.