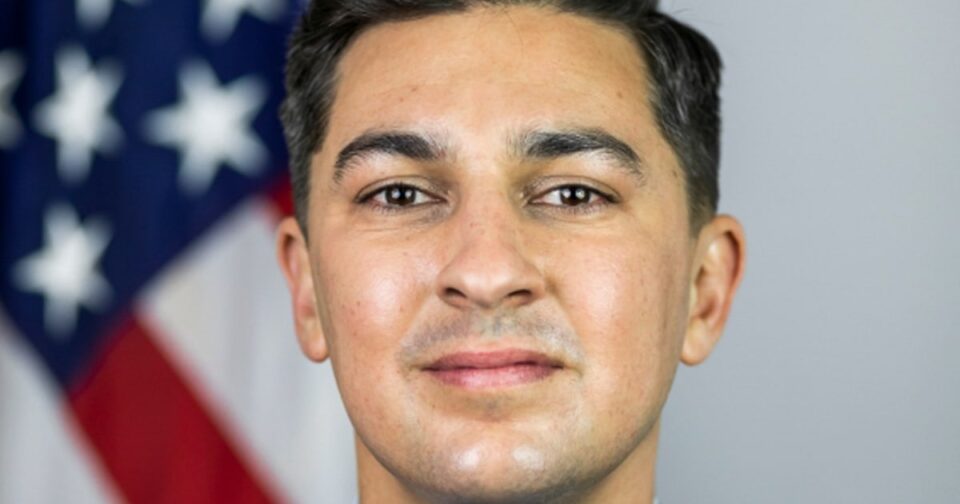 Curtis Ried, a career foreign service officer and veteran of the National Security staff for two presidents, has been named as the NSC’s new chief of staff, officials tell NBC News.

Ried will be the first openly LGBTQ member of the NSC’s senior leadership team, the White House says, and replaces Yohannes Abraham, who was confirmed by the Senate in August to be ambassador to the Association of Southeast Asian Nations (ASEAN).

“We are excited to have Curtis take on this critical leadership role for our team. I’m confident he will bring to it his trademark smarts, skills, and collegiality, sharpened across his nearly 20 years as a Foreign Service Officer and multiple tours at the NSC,” National Security Adviser Jake Sullivan said in a statement.

Ried currently serves as the NSC’s senior director for multilateral affairs, a role that has connected him the entire national security apparatus. He has traveled regularly with President Biden at home and abroad, another key factor in his selection.

Following an administration that followed an “America First” mantra and preferred to engage in one-on-one diplomatic engagements, the Biden foreign policy has worked to put the U.S. back at the head of a collective global response to key challenges and threats, from responding to Russia’s invasion of Ukraine to the Covid pandemic and climate change. Ried in particular played a key role in working with the United Nations and rebuilding the refugee admissions program.

“Curtis has been a trusted partner to me and many senior leaders across the President’s cabinet, and he is an excellent choice for this important role,” said Linda Thomas-Greenfield, the U.S. ambassador to the UN.

Ried’s is just the latest personnel move within the NSC after a particularly consequential period that also saw the U.S. ending its 20-year war in Afghanistan. Shehzi Khan also joins the NSC as deputy senior director for Intelligence, and Shanthi Sethi, a U.S. Navy Captain, is coming on for a new position focused on personnel recruitment. Christina Segal Knowles also joins as senior director for International Economics.

Abraham, who served in a number of domestic policy and political roles for all eight years of the Obama administration, became NSC chief of staff after serving as executive director of the Biden-Harris transition team, helping “lay a strong foundation for the entire administration,” Sullivan said. Biden has worked to cultivate relationships with ASEAN nations as part of the administration’s strategy with China. Abraham will be sworn in by Vice President Kamala Harris Monday night.

On Friday NBC News reported on how, despite questions about President Biden’s political future, his top advisers have been building a potential re-election effort in plain sight.

And, by committing from an early stage to make substantial, targeted investments in the national party organization at an early stage, Biden recognized a convenient political reality — that the states that would matter most for retaining control of the Senate and key governorships in 2022 are going to be equally important two years later.

As the story noted, more than 250 full-time, paid DNC staff have been deployed to eight key states — Arizona, Georgia, Michigan, Nevada, New Hampshire, North Carolina, Pennsylvania and Wisconsin. That number doesn’t include so-called DNC “fellows” and other part time staff who are engaged in some of the key party efforts, especially voter registration. Another 200 full time staff have been funded by the DNC for coordinated campaigns since Biden took office, including 120 in New Jersey and Virginia, which had gubernatorial and state legislative races in 2021.

A party official gave a deeper dive into what those numbers look like now, what areas the staff are focused on and why the Biden team might stand to benefit from their work in the future. In each of the eight states, the national party has doubled what it directed toward midterm efforts four years ago, a party official says, and it is making the party voter file available for voter outreach at no cost. Some specific state efforts include organizing tribal communities and trying to register new voters with paid English and Spanish-language outreach in Arizona, a continued focus on voter protection in Georgia, and registering voters in Black and Arab communities in Michigan.

After November, the party says it expects to see some contraction of its staff in Washington but that the efforts made in midterm battlegrounds may be able to quickly turn toward a 2024 campaign effort. If Biden has announced his plans early on, that will make the transition more seamless quickly. But it appears the possibility of Democrats having a better-than-expected midterm cycle could delay the deployment of a top White House lieutenant — many sources we spoke to for our story pointed at Jen O’Malley Dillon as the most likely — to a new campaign operation, if Biden ends up with more legislating still to do.

Send in the Surrogates

With his visit to the State Funeral for Queen Elizabeth II followed shortly after by the United Nations General Assembly, Biden is engaged in something of a diplomatic pause in what had been more robust travel schedule of late appearing with Democrats on the ballot this fall. But we’re seeing some other key players starting to ramp things up.

Vice President Kamala Harris this week will hold a voter registration event in South Carolina as part of what advisers say is one of her areas of focused for the final 50 days of the midterm campaign: ginning up turnout for key Democratic constituency groups, including people of color and young voters.

Harris has taken a lead role in the Biden administration’s response to the Dobbs decision ending a guaranteed right to abortion, linking that to the erosion of other key rights including access to the ballot itself. A Harris adviser said she’ll continue that focus in both travel to key states, including North Carolina, Florida, Texas and Wisconsin, as well as a stepped-up schedule of traditional and non-traditional media appearances.

First Lady Jill Biden, meanwhile, kicked off her push at a fundraiser for the DNC in Los Angeles on Friday, in which she noted that her parents were both Republicans and argued many in the party also can’t what’s happened to the GOP.

“It’s not enough to just get angry. We have to get out and get to work,” she said.

A senior Biden adviser said the First Lady “will be an active campaigner and fundraiser for Democrats this fall,” with “a message of optimism and hope, focusing on the accomplishments of her husband’s administration.”

“’Joe is delivering results’ will be a frequent message from her on the stump, name checking his achievements, and calling on voters to imagine what more he could do with larger majorities in Congress,” the adviser said.

How to Console A King (And Queen)

When Biden spoke with King Charles III this week it marked an unusual coming together of two of the most veteran new heads of state in world history — the oldest new British monarch ever speaking with the United States’ oldest president ever. At 73, Charles had also been the longest-serving heir apparent in British history. And Biden, one of the youngest senators in U.S. history, also had eight years one heartbeat away from the presidency before winning it on his own two years ago.

White House officials declined to elaborate on conversations between the two sides beyond the official readout. But on Sunday Biden himself revealed how he returned to a familiar role as consoler-in-chief with the new King, telling him his late mother, Queen Elizabeth II was “going to be with him every step of the way — every minute, every moment.”

Biden played a similar role a year ago when he met Elizabeth at Windsor Castle, just months after she lost her husband, Prince Philip. First Lady Jill Biden told NBC’s Sheinelle Jones last week that protocol officers had told the president and her not to engage in any discussion about family with the Queen during their meeting. But when they arrived, “the first thing she starts with is family.”

“I think she just wanted to talk about her husband. And that’s how she started off, talking about him and the things he did and the things they did together,” Biden said.