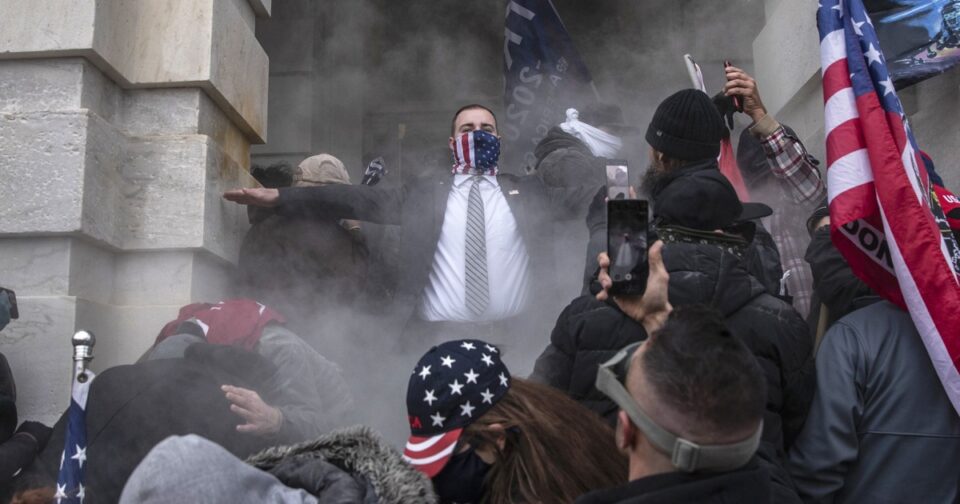 Five people who federal investigators say are associated with the far-right group America First have been arrested in connection with last year’s attack on the U.S. Capitol.

In addition to numerous criminal charges, they are accused of entering House Speaker Nancy Pelosi’s conference room, according to a court filing.

The Justice Department said in the filing that the leadership of America First “has espoused a belief that they are defending against the demographic and cultural changes in America.”

Members of the group are commonly referred to as “Groypers.”

In the complaint affidavit filed last week, FBI investigators said Brody and the four other defendants entered the Capitol together on Jan. 6, 2021, and that camera video showed the group moving throughout the building and “enabling the disruption of U.S. Congressional proceedings along with other rioters, for over 30 minutes.”

Investigators also said Brody entered the Senate floor Senate and took photos or video of senators’ desks. Brody is accused of helping another rioter use a metal barricade against a Capitol Police officer, who was knocked back as he tried to secure the door.

According to the filing, the group also watched the destruction of media equipment, which had been surrounded by metal barricades, with Brody and Chase taking part in the destruction.

Brody, known to online sleuths as #suitguy, can be seen wearing a charcoal suit and a striped tie with a U.S.-flag-styled neck gaiter in Jan. 6 screenshots and open-source media cited in the affidavit.

More than 850 people have been arrested in connection with the Capitol attack, and more than 350 have been convicted.

Last week, a Jan. 6 rioter who wore a “Camp Auschwitz” sweatshirt inside the Capitol was sentenced to 75 days in prison, while another supporter of former President Donald Trump admitted dragging an officer down the stairs of the Capitol and telling other officers they were “gonna die tonight.” Three other defendants were convicted of felony charges.

Hundreds more could face charges but haven’t yet been arrested.