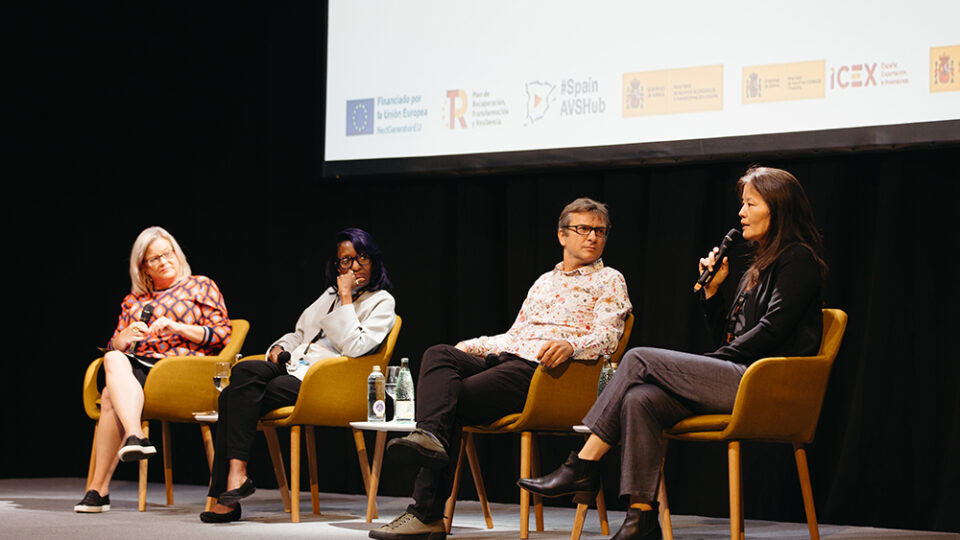 How to navigate new technologies, new ways of thinking and how to broaden storytelling to encompass diversity and different communities were some of the questions posed by moderator Wendy Mitchell.

“We are looking at new ways of thinking: How storytellers and companies can use new technologies, how to look at an industry that’s more sustainable and more reflective of society, as well, today,” said Mitchell.

Williams’ company deals in both traditional media and web. Her company is embracing change by “trying to get creators where their creative economy is. It’s an overused phrase, but it’s a true phrase,” she said. “There are now different tools out there that enable creators to be able to make their product and get it out to an audience or to a community in ways that weren’t around when I first started producing. So we’re trying to make sure that these creators are part of the business and to kind of be able to approach the market including investors and sales. It’s an entrepreneurial spirit. You are still dealing with contracts and a system that wasn’t built for this new creator community.”

Hunt definitely wears multiple hats. Between his different entities, he said: “We finance about 50 films a year and have financed over 500 movies. Meanwhile, Bohemia focuses on marginalized voices.”

Both Chien and Hunt thrive on being outsiders. “I’m a white heterosexual male,” said Hunt,  “But I feel more at home with people that are not like me. We are doing a lot of stuff on the sex positive side. That is fascinating. It doesn’t really matter to me if someone identifies as male, female or non binary. It’s more about their stories and where they come from.”

Added Chien: “I’m used to feeling like an outsider as the child of Chinese immigrants to Los Angeles. If I’m in a room where I feel too at home I would probably change the room.”

The U.S. is home base, but, she said: “The U.S. is really just another country for our company but that is really rare for a U.S. company. It is really tough for something that is artist driven in the U.S. right now but there is a different model here in Europe with co-productions.  The market for equity financed American independent features is super tough right now.”

Each panelist had an opportunity to talk in depth about their company and activities.

Said Chien: “Louverture originally brought me on to expand the company into fiction. It is a company that’s really well known for documentary and international arthouse. That was Feb. 18, 2020. So really good timing, a month before the pandemic started. When we could not grow into fiction at that time. Instead, we spent the pandemic re-strategizing the company.

She went on: “My job is to help move Louverture from what was essentially a venture philanthropy model to a venture capital model. So what does that really mean? It means taking a lot of bets, but in a very diversified way. So the best way that I can say it is that our strategy, which we announced in January of this year, is very much about diversifying.

“So we really looked at ways to do that even looking at starting a cash flow facility to help fund the riskier projects we wanted to do,” Chien recalled. “We announced in January that we were expanding into multiple spaces. Scripted series is probably the hardest space we are trying to move into. But we have a couple of really strong partnerships there.”

Louverture has raised both an independent overhead fund and grown independent development operation. “You have a lot of companies in L.A. who have overhead deals, but they don’t have development money. So they come to us knowing our taste, knowing the kind of artists that we like to work with.”

Duke Energy is one of the top leakers of a gas that is 25,000 times more polluting than carbon dioxide, EPA records show