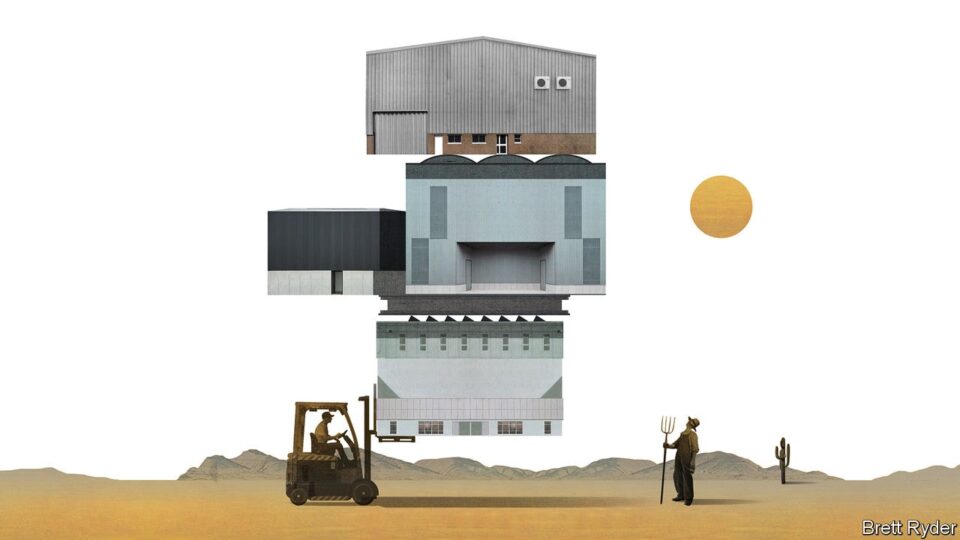 With a straw hat, shades and a red chequered shirt, Randy Bekendam looks every inch the grizzled farmer—albeit in a Californian countercultural sort of way. The tomatoes, courgettes and King David apples he sells at this time of year have never seen a pesticide. Young families visit to pet his goats and learn about the merits of soil health. The 70-year-old is not shy about sharing his convictions, either. They run deep. The land he has leased for the past 34 years, called Amy’s Farm, has been sold out from underneath him. Now, echoing Joni Mitchell, he is battling to stop the rural idyll from being paved over and turned into a warehouse.

His home city of Ontario, less than an hour’s drive east of Los Angeles, is now almost as replete with windowless “logistics centres” as it once was with orange and lemon groves. From his ten-acre plot, he can see them bearing down on him. Across the road, a building the size of 100 American-football fields, or 5.3m square feet (492,000 square metres), is rising from the dirt of what used to be a dairy farm. A block away, Prologis, the world’s biggest warehouse-builder, has nearly finished a five-floor facility on more than 4m square feet of land; the blue livery of Amazon, an e-commerce giant, already adorns its upper rim. Nearby, Amazon and FedEx, a package-handler, have more big boxes. Thundering down the country roads between them are 18-wheeler trucks. The dust they kick up smothers a man hawking cocos fríos (chilled coconuts) to the few Mexican farm hands left working the land. “Those big rigs go wherever they want,” Mr Bekendam mutters.

By chance your columnist visited Ontario on September 16th just after FedEx warned of gathering economic headwinds, jettisoned its earnings forecast and triggered a 21% fall in its share price. That swiftly spilled into concerns about the future of warehouse firms like Prologis, worth $80bn. Its share price had already come off its highs this year after Amazon, its biggest customer, admitted that it had overbuilt.

You might think that the rising risk of recession, Amazon’s retrenchment (though not in Ontario) and the clamour of those like Mr Bekendam fighting to halt warehouse construction would worry this booming industry. Not a bit of it. A visit to Southern California’s Inland Empire, once called “the land of cheap dirt” and now the hottest warehouse market in the world, leaves little doubt that the wheels will not fall off the juggernaut just yet.

Almost everything about the Inland Empire excites logistics nerds. The region, two-thirds the size of Connecticut, sits between two fabulously wealthy areas, Los Angeles and Orange County. It is roughly equidistant from America’s two biggest ports, Los Angeles and Long Beach. It boasts air hubs for FedEx and Amazon, as well as a rail network. It is criss-crossed by freeways, sending goods shipped in from Asia across the country. And it has a growing population. cbre, a property firm, says warehouse-building has been frenetic, reaching a record 39m square feet in the second quarter. As soon as buildings are completed, they fill up: the vacancy rate is 0.2%, lower than anywhere else on earth. Such is the clamour for space that rents have soared by 72% in the past 12 months.

It would seem logical for corporate renters to resist such eye-popping increases if they think consumer demand is peaking. But rents are still a relatively small part of logistics costs. James Breeze of cbre reckons the transport of goods accounts for about half a typical company’s supply-chain expenses. Warehouse rental is a mere 6%. At prime locations close to ports, such as the Inland Empire, it may be worth paying through the nose for warehouses if it cuts down on trucking costs.

Moreover, structural changes in the global economy are turbocharging demand. The shift to e-commerce, though it has slowed since the height of the pandemic, requires much more warehouse space than physical retail: goods are shipped in individual packages, not on space-saving pallets, and returns pile up. Supply-chain chaos and geopolitical risks have increased the desire for extra storage space. Prologis reckons its customers want to hold about a tenth more “safety stock” as a buffer.

The Inland Empire also illustrates some of the growing pains, including the first signs of a public backlash. Environmentalists claim that local councils waved through planning applications during the pandemic with little scrutiny. A draft communiqué calling for a moratorium on warehouse construction in the Inland Empire, co-authored by Susan Phillips, director of the Robert Redford Conservancy at Pitzer College, describes a burgeoning public-health crisis, especially because of the pollutants emitted from diesel-guzzling trucks that pass schools and hospitals, and clog the freeways. This year air-quality authorities in Southern California began imposing a quasi-tax on warehouse landlords based on the “indirect” emissions from trucks that serve them. “They are definitely getting very anti-diesel,” says one logistics boss. John Husing, a local economist, derides the environmental pushback as “noblesse-oblige crap” by affluent members of the Inland Empire. More blue-collar communities welcome the decent jobs provided, he says. There are few other employment opportunities.

The school of hard NOx

Warehouse firms say they are starting to clean up their act. Amazon has ordered 100,000 delivery vans from Rivian, which makes electric ones. Prologis is building a separate business to provide charging stations for electric trucks. It intends to increase the generating capacity of solar panels on its bountiful roofs ten-fold within ten years. For many years yet, though, the industry is unlikely to be able to wean itself off diesel.

Mr Bekendam, or Farmer Randy as he is known, acknowledges that stopping the warehouse boom is an uphill struggle. But he fights on. At least he hopes the publicity he generates from his popular homestead will make developers think twice before bulldozing it. “No one wants to be guilty of paving Amy’s Farm.” ■

Read more from Schumpeter, our columnist on global business:
The rise of the borderless trustbuster (Sep 15th)
Starbucks and the perils of corporate succession (Sep 8th)
Is Nvidia underestimating the chip crunch? (Sep 1st)

A grandmother accidentally texted a stranger to make Thanksgiving plans. 7 years on, they’re still celebrating together.