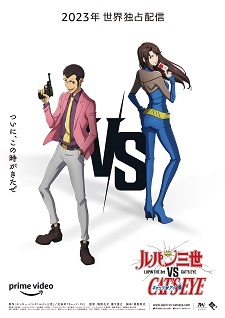 TMS Entertainment opened an official website for a crossover anime titled Lupin III vs. Cat’s Eye (Lupin the 3rd vs. Cat’s Eye) on Thursday, revealing the production staff, lead cast, a key visual (pictured), and the first promotional video. The anime will debut worldwide on Amazon’s Prime Video platform in 2023.

Kanichi Kurita and Keiko Toda are reprising their roles as Lupin III and Hitomi Kisugi from the original anime.


The anime is celebrating both the 50th anniversary of Lupin III and 40th anniversary of Cat’s Eye anime series. The crossover anime will take place in the 1980s, when Tsukasa Hojo‘s action mystery manga was being serialized.

Lupin III: Part 6 (Lupin the 3rd Part 6), the latest installment in the franchise, aired in 24 episodes beginning Fall 2021. Sentai Filmworks licensed the anime in North America and simulcast it on HIDIVE with subtitles.

Lupin III, the great phantom thief—the man who loves freedom and lives in romance—never fails to steal his prey. The Cat’s Eye are the ladies who run the night splendidly and create commotion in the world. They are sometimes phantom thieves, other times three beautiful sisters who run a café.


The mutual target is “Three Paintings”—which were left behind by the three sisters’ father, leading to the dream showdown between Lupin and the Cats. Amidst the mix-up of the charming characters, the story eventually leads to the amazing “secret” hidden in the picture… A retro and stylish exhilarating crime action unfolds!

EU, US edging toward trade spat when both want unity instead