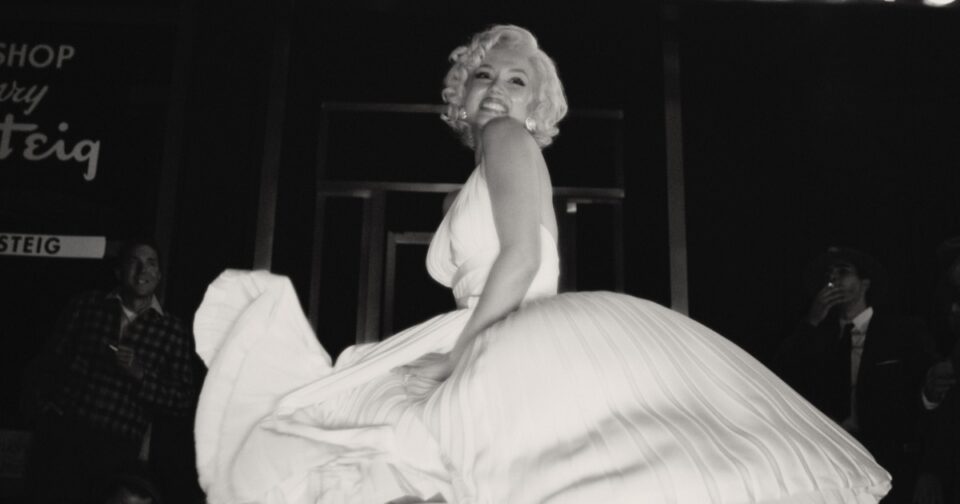 In 2010, three of Marilyn Monroe’s chest and pelvis X-rays sold for $45,000. Celebrity memorabilia will always fetch a pretty penny, but auctioning off an X-ray felt extra invasive — even to a person like me, who delighted in the opportunity to touch Sylvia Plath’s hair at an academic archive.

She is everything golden and grotesque about the star system even today. But what often gets lost in the mythologizing is her humanity.

Monroe commands this kind of obsession because of her unique talent, iconic look, complex personality, relationship to the cultural moment she was a part of and — yes — the trauma she experienced during her short life. But as most people, it’s hoped, understand, suffering didn’t define Monroe’s life. To see “Blonde,” however, is to see a depiction of someone who experienced mainly pain and very little joy.

“Blonde,” which is based on the novel by Joyce Carol Oates and directed by Andrew Dominick, is not a biography but a work of fiction. (I have not read the 700-plus-page novel, but Oates seems pleased with the adaptation.) The film is impressionistic, haunting and spare, moving abruptly through Monroe’s life without establishing much cause and effect for anything except childhood trauma. The result here is to convey a version of Monroe who ebbed and flowed, who did not steer her own ship.

American culture is obsessed with appearances; nothing grabs our attention quite the way a shiny veneer with rot underneath does. Hollywood embodies this narrative, and Monroe embodies Hollywood. She is everything golden and grotesque about the star system even today. But what often gets lost in the mythologizing is her humanity, her happiness and her desire to live an extraordinary life.

It’s tempting to cast her as a tragic figure in the vein of a contemporary Antigone or Cassandra in which we focus only on her suffering instead of her success. The real-life Monroe was gutsy enough to break a contract with 20th Century Fox and start her own production company, which she named Marilyn Monroe Productions.

With a lesser actor in command, this parable of anguish might have been a total disaster. Ana de Armas, however, grounds the movie. She fully embodies Norma Jean/Marilyn Monroe and brings vulnerability and empathy to a character who has always been egregiously portrayed as a fantasy of suffering. De Armas’ Monroe has a quiet determination that comes across even as the film itself seems fixated on exploiting her victimhood.

“Blonde” is full of suffering. Monroe’s world is colored by sexual violence. It’s one of men leering, raping and abusing her. When she finds saviors, they inevitably abandon her. These men use her, their identities intermingling until in one scene the face of her husband, named only “The Playwright” in the movie, is actually scratched out, and she wonders who he is as she walks by in a daze. In another scene, faces distort into terrifying masks, mouths elongated in grotesque smiles. Throughout the film, she pines for her absent father, and a revelation about him is posited as the force that finally pushes her to her death.

Monroe’s unrealized desire to be a mother is also a large part of the film — as it was for her in real life. She desperately wants a child and is overjoyed each time she becomes pregnant, only for each pregnancy to end under traumatic circumstances, also true, further plunging her into depression.

It can be powerful when women share their reproductive trauma. But in “Blonde,” it feels exploitative. The film unnecessarily takes us inside Monroe’s cervix not once but twice during abortion scenes — for what reason? The cervix shots are low points in the movie and feel sadistic, as are the framing of other gynecological traumas Monroe experiences (a recurring talking fetus reminds me of a low-fi anti-abortion video I might have seen at my Catholic high school).

There are glimmers of another, more empowering kind of storytelling in “Blonde,” though. The scenes in which Monroe practices her craft at acting studios are some of the most powerful — allowing Monroe to be seen as an artist with uncanny talent and passion.

In these moments of creative agency, Monroe demonstrates that she is a genius and a hard worker. She is committed to her art and that gives her life meaning. These glimpses, however, are limited. In one telling episode, Monroe apparently presents a monologue that brings the initially unimpressed Playwright to tears — but the audience doesn’t get to watch her recite it. We see The Playwright’s reaction, not the acting that so deeply moved him.

I’m not saying films about Marilyn Monroe must be filled with butterflies and sunshine, or that art should never be difficult or emotionally disturbing. Rather, I’m saying that it’s important to honor each part of this woman’s life, even in a movie based on fiction. Instead of only lingering on her body in pain, linger on her body in power, too. Embrace a more holistic narrative. Scenes that show Monroe living and loving her life — gardening, playing at the beach — are some of the most moving parts of the film.

We are ultimately left with a bleak vision of Monroe’s life, albeit one that, perhaps due to de Armas’ acting more than the script itself, is still affecting. How much more moving and thought-provoking this film could have been had it kept Monroe’s trauma in its true proportion instead of blowing it up in yet another portrait of exploitation.

Patricia Grisafi, Ph.D., is a freelance writer and editor. Her work has been featured in The Guardian, Salon, Vice, LARB, Catapult, Self, Narratively, The Rumpus, Business Insider and elsewhere. She lives in New York City with her husband, son and two rescue pit bulls.