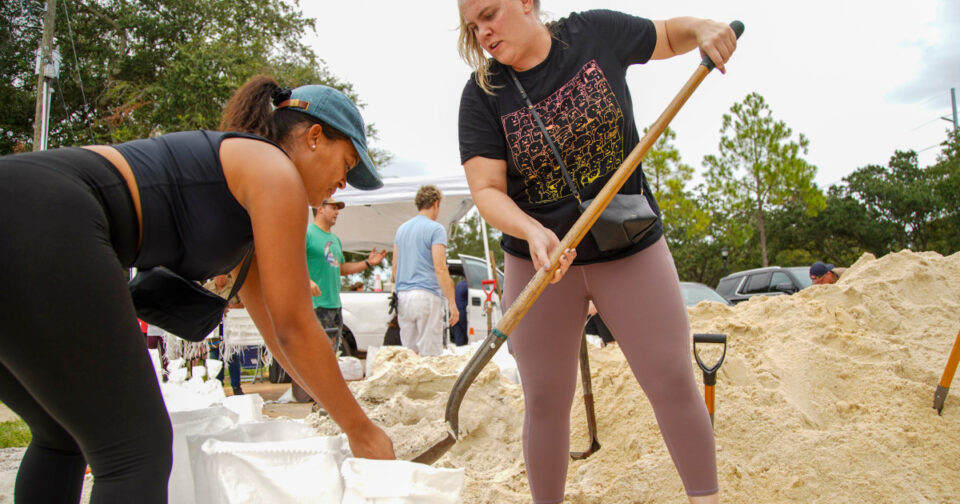 Ian strengthened into a hurricane Monday as Florida began ordering evacuations and prepared for possible floods this week.

Tornadoes are also possible late Monday night and into Tuesday across the Florida Keys and the southern and central Florida Peninsula, according to the National Hurricane Center.

A mandatory evacuation was issued for some residents in Hillsborough County on the westernmost part of the Florida Peninsula on Monday. Emergency shelters were opened in the county, which includes Tampa.

Follow along for NBC News’ live coverage of Hurricane Ian

County Administrator Bonnie Wise told reporters the orders and recommendations for evacuation will go into effect at 2 p.m. on Monday.

“We did not make this decision easily, but the storm poses a serious threat and we must do everything we can to protect our residents,” Wise said during a news conference.

In coordination with Hillsborough officials, the MacDill Air Force Base in Tampa, home to U.S. Central Command, has also announced a mandatory evacuation. The order is for “non-mission essential individuals” living in the westernmost part of the county, which includes uniformed service members, civilian employees and their dependents. This evacuation is in effect and set to be completed by Tuesday afternoon.

Hernando County, about an hour north of Hillsborough, has issued a voluntary evacuation order on Monday for those living in low-lying areas and mobile homes. The order will become mandatory Tuesday morning. Shelters will also open Tuesday, and schools will be closed in the coastal county.

Manatee County, south of Hillsborough, also announced plans for a mandatory evacuation for some residents that will go into effect Tuesday morning, according to a news release.

Tampa International Airport is bracing for “potential severe impacts” from the hurricane and “may begin shutting down parts of its airfield and facilities in the next 24 to 48 hours” as wind speeds increase. All airport operations will stop when sustained winds reach 50 mph.

Cuba, Cayman Islands in the path of the storm

Currently in the western Caribbean Sea, Ian is expected to rapidly strengthen during the next day or so and become a major hurricane as it nears western Cuba, where it is expected to “produce significant wind and storm surge impacts.”

The storm, which is about 195 miles southeast of the western tip of Cuba, has maximum sustained winds of 85 mph, with higher gusts, the hurricane center said.

A hurricane watch was issued along the west coast of Florida from north of Englewood to the Anclote River, including Tampa Bay, while a tropical storm warning is in place for the lower Florida Keys from Seven Mile Bridge to Key West as well as Dry Tortugas Island.

The center of Ian is expected to pass near or west of the Cayman Islands on Monday, and near or over western Cuba on Monday evening and early Tuesday, the hurricane center said.

“Ian will then emerge over the southeastern Gulf of Mexico on Tuesday, and pass west of the Florida Keys late Tuesday, and approach the west coast of Florida on Wednesday,” it said.

The hurricane is forecast to bring 8 to 15 inches of rain to central West Florida, 3 to 8 inches to the rest of the Florida Peninsula and 4 to 6 inches to the Keys.

“Heavy rainfall is expected to affect North Florida, eastern portions of the Florida Panhandle, and portions of the Southeast, and Mid Atlantic regions Friday and Saturday,” the hurricane center said. This rain can cause flash and urban flooding mid-to-late week in central Florida as well as across the Florida Keys and peninsula through midweek.

Flooding and rising of streams and rivers over northern Florida and parts of the southeast U.S. are also possible mid-to-late week.

“Regardless of Ian’s exact track and intensity, there is a risk of dangerous storm surge, hurricane-force winds, and heavy rainfall along the west coast of Florida and the Florida Panhandle by the middle of this week, and residents in Florida should ensure they have their hurricane plan in place,” it said.

In photos captured Sunday, residents in Tampa could be seen filling sandbags to help prevent against flooding ahead of the storm.

In Kissimmee, about an hour northeast of Tampa, a long line of shoppers could be seen waiting outside a store in a race to stock up on supplies ahead of Ian’s arrival. A number of people could be seen carting several cases of water bottles out of the store.

Before the hurricane reaches Florida, it is predicted to pass near or west of the Cayman Islands before moving over to western Cuba.

‘Pray and hope for the best’

“Life-threatening” storm surge and hurricane-force winds are expected to hit parts of western Cuba starting late Monday, with Ian expected to be at or near major hurricane strength by the time it nears the region.

Western Cuba can receive anywhere from 6 to 16 inches of rain, the Cayman Islands might receive 3 to 8 inches, and Jamaica an additional 1 to 3 inches, according to forecasters. This rainfall may produce flash flooding and mudslides in higher terrain areas over western Cuba.

Water levels along the coast of western Cuba can rise as much as 9 to 14 feet above normal tide levels Monday night and early Tuesday.

Authorities in Cuba suspended school classes in Pinar del Rio Province and said they would start evacuations Monday in preparation for the storm.

“Efforts to protect life and property should be rushed to completion,” the hurricane center warned.

Cayman Islands Premier Wayne Panton urged residents to get ready for the storm and to check in on neighbors.

Iran Threatens to Torture Players’ Families Ahead of USMNT Match, per Report