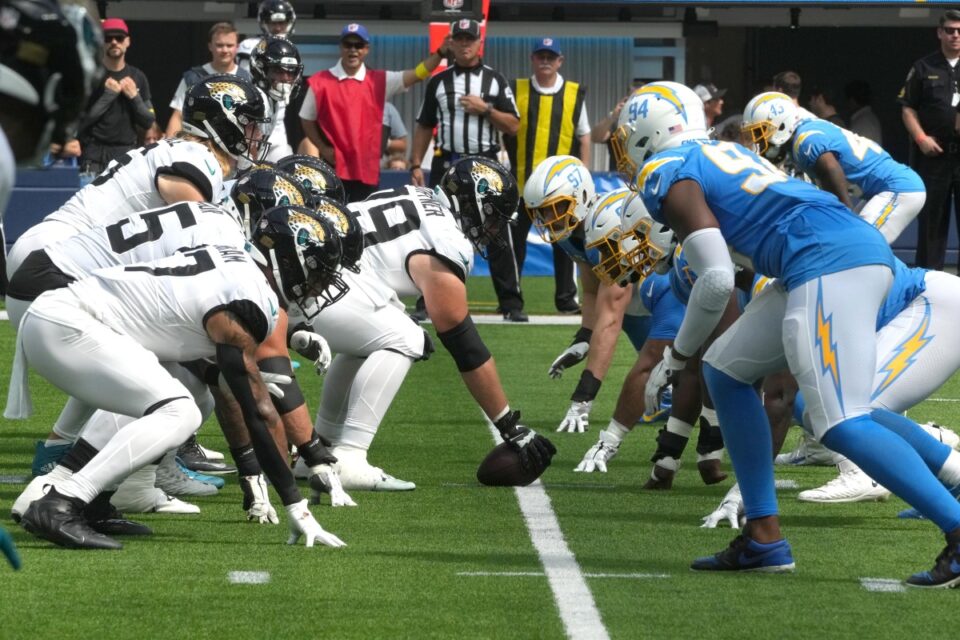 While watching a game live can give you one impression of a player’s usage, looking at the actual amount of snaps they played compared to their teammates can also give insight into the team’s strategy and outlook.

When looking at the snap counts for the Jacksonville Jaguars after their 38-10 romping of the Los Angeles Chargers on the road on Sunday, it is clear to see what kind of plan the Jaguars went into the game with, and what limitations they had from a personnel standpoint.

Who played a lot, and why? Did the snaps mean anything or nothing? We examine below:

For the first time in the Doug Pederson era, the Jaguars were in victory formation — meaning snaps for C.J. Beathard, Tyler Shatley and Walker Little. Tim Jones didn’t see a target in his four snaps, but he did play 54% of the special teams snaps, proving how critical he is to the team’s special teams unit. He recorded one tackle on the day and continues to have the track of being the team’s top backup on the outside. Zay Jones out-snapped Marvin Jones for the first time this season, a potential reflection of the Jaguars riding the hot hand at wide receiver. Jones led the Jaguars in targets, catches, yards, and first downs/touchdowns converted in his best game as a Jaguar yet.James Robinson is going to be the workhorse of the Jaguars’ offense until the wheels fall off. Robinson has been consistently given more and more volume of snaps and touches since he proved in Week 1 that he was healthy, and he responded with 100 yards on the ground and a key 50-yard touchdown on fourth-down.While Travis Etienne isn’t seeing the same snaps as James Robinson, he is still getting the ball quite a bit when he is on the field. He had 16 touches (13 carries, three catches) for 75 yards and was even featured in a newly-used Wildcat package.Defense (61 snaps)FS Andre Cisco: 61 (100%)

The Jaguars showed us their plan for when a starting cornerback goes down; with Shaquill Griffin out with a hip injury, the Jaguars started nickel cornerback Darious Williams and kept him on the field for every single snap, previously Griffin’s role. Williams did stay in the slot at times against three-receiver looks as Tre Herndon stepped onto the field in place of an extra defensive lineman.Dawuane Smoot and Arden Key each out-snapped the Jaguars’ starting base defensive linemen — not just one of them, but all three of DaVon Hamilton, Foley Fatukasi and Roy Robertson-Harris. The Chargers ran the ball just 12 times, but they rarely ever threatened the run with their formations, either. Only three defensive players have played 100% of the snaps through Week 3: Rayshawn Jenkins, Andre Cisco and Foyesade Oluokun. Tyson Campbell has missed one snap, while Devin Lloyd missed seven snaps in Week 1 in place of fellow rookie Chad Muma.
Read More