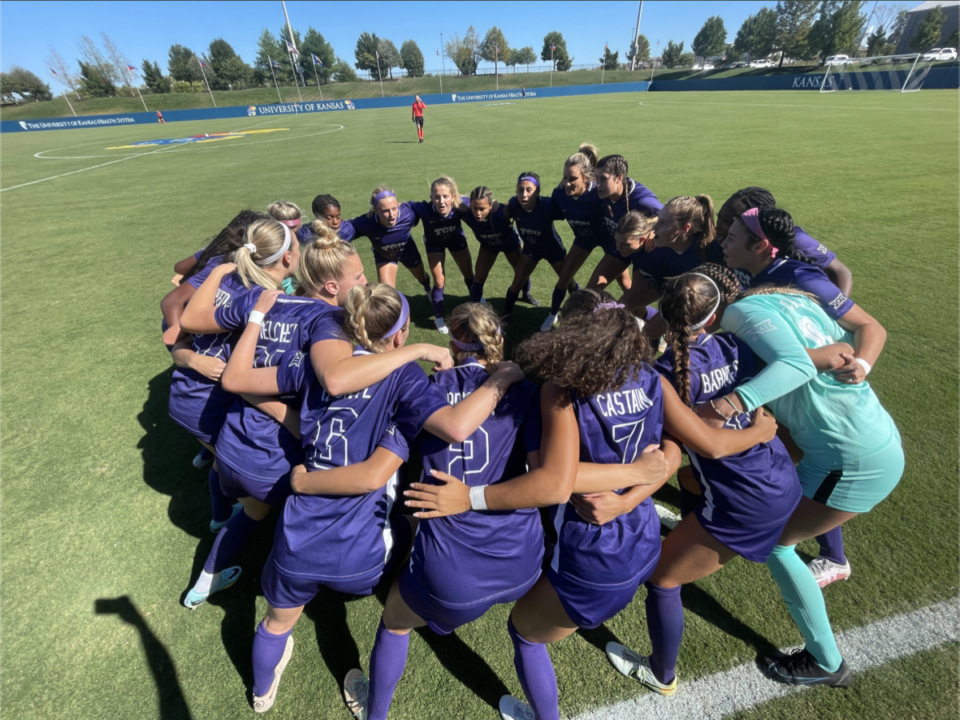 Head Coach Eric Bell and the team started their road trip traveling to Lawrence, Kansas to take on the Jayhawks in the second week of Big 12 matches. Coming off a hard-fought match against the University of Texas on Thursday, the team was hungry for all three points against Kansas.

While the opening 45 minutes remained scoreless, the Frogs threatened with their lethal attack, knocking on the door throughout the half. Chaylyn Hubbard, who has had a tremendous season so far, was active on the flanks. She continues to impress and gain the rightful recognition as one of the more prominent right backs in the Big 12. Her ability to shut down wingers on the defense, and her guile going forward on the attack makes Hubbard such a problem for the opposition.

It wasn’t until the 47th minute when Camryn Lancaster worked down the flank and whipped in a cross. With some luck from the underside of the crossbar, the ball fell to Gracie Brian, who launched TCU in front with the first goal of the game. Brian’s third goal of the season was crucial as it would be the only goal to separate the two sides.

For Lancaster, her first assist of the season comes as the sophomore forward is in the best form of her career. A versatile player, Lancaster is able to contribute to the TCU attack whether it is from a more central role, perhaps as an attacking midfielder, or on the flanks where she can use her speed to fly past defenders.

The Frogs dominated Kansas on the defensive side of the ball, holding them to only one shot in the first half. With four saves on the day, Lauren Kellett led the Frogs to their fifth clean sheet of the season. While the defense has been the subject of a few changes, it has developed entirely and become one of the more formidable backlines in the conference.

In the most recent polls, the Frogs propelled to No. 12 on the national rankings. The team will be taking this recent surge and momentum to Manhattan, Kansas to take on the Kansas State Wildcats on Friday.

Want to join the discussion? Click here to become a member of the Killer Frogs message board community today!

Ukrainian Flags Are on Display All Over Maine. Why?