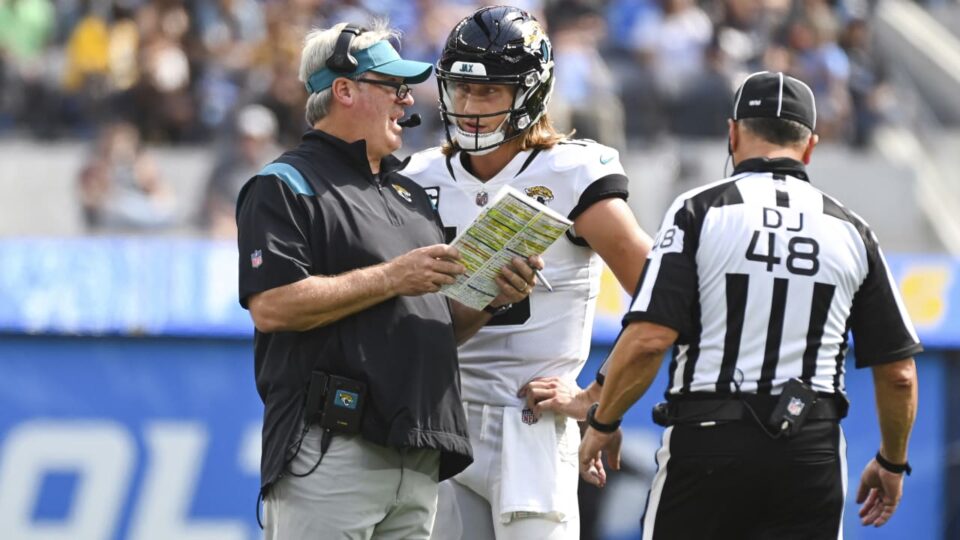 Itching to watch an underdog try to overcome the odds or triumph against adversity? Simply looking to pass the time reading another NFL.com article while stuck in your cube? Nick Shook offers a bead on five us-against-the-world scenarios to track entering Week 4 of the 2022 NFL season. The order below is determined by confidence rankings, from No. 1 (most confident) to No. 5 (least confident).

Allow me to take a victory lap.

In Week 3, the Dolphins welcomed the Bills to Hard Rock Stadium as home underdogs. Most everyone believed Buffalo would roll to a victory over the upstart Miami bunch, but not me.

I chose the Dolphins as one of my underdog picks, and after much Twitter ridicule, I was proven correct. In fact, four of my five underdogs came out on top in Week 3, and if Dan Campbell had another shot at it against Minnesota, his Lions might have made it a perfect five for five.

Miami is back this week, but not atop the confidence rankings. As for the rest of the group, we have some interesting underdogs in an NFL season that is once again proving to be unpredictable.

Here are the five underdogs I believe in most to score upsets in Week 4.

The lines below provided by DraftKings are current as of 1 p.m. ET on Wednesday, Sept. 28 unless otherwise noted below.

WHERE: Bank of America Stadium (Charlotte)WHEN: 4:05 p.m. ET on Sunday | FOXSPREAD: Cardinals +2I was shocked to see the Panthers listed as the favorite in this one. Carolina is celebrating its first win of the season, but the performance against the Saints was far from perfect. The Panthers played good enough defense (three takeaways) to protect an early lead and give their offense enough breathing room to operate. That’s about it for the summary.

I don’t expect the same to happen against Kyler Murray’s Cardinals.

The star quarterback’s skills weren’t enough to push the Cardinals past the Rams last week, which could explain why Arizona is the underdog, but the Panthers have yet to prove they can consistently produce enough offense to keep up with a team that is firing on all cylinders.

Simply put, I don’t have a ton of faith in Carolina. While the Cardinals have struggled in their own right, their comeback win over the Raiders served as proof they can still find ways to put points on the board when absolutely necessary, something the Panthers have yet to show me.

If everything else is considered even, I’ll take Murray — who is significantly worse without DeAndre Hopkins (the WR is serving a six-game suspension) — over Baker Mayfield. Arizona hasn’t quite found its rhythm yet, especially in the first half of games, but if that changes Sunday, it should be enough to withstand Carolina’s tendency to get going in the second half. Also, the Cardinals are slightly better than the Panthers on third down, a situation I expect both offenses to encounter plenty. And above all, again, I trust Murray to make more key plays than Mayfield.

WHERE: Paycor Stadium (Cincinnati)WHEN: 8:15 p.m. ET on Thursday | Prime VideoSPREAD: Dolphins +4The 3-0 party in Miami will be an abbreviated one thanks to a Thursday night kickoff in Cincinnati. The reigning AFC champions, fresh off their first win of 2022, await them.

Statistically, Miami’s defense hasn’t been great to this point. However, first-year coach Mike McDaniel’s squad held the high-flying Bills to just 19 points in Week 3 and Miami is battle tested, going 3-0 against three teams that won eight or more games in 2021.

History is working against Miami here. The last rookie coach to go 3-0 in his first three games was Green Bay’s Matt LaFleur, who recorded his first loss the following week. That game was played on — you guessed it — a Thursday night.

Also, Miami is running into a defense that hasn’t allowed a touchdown in its opponents’ last 20 drives.

Fear not, Dolphins fans. As you know, banged-up QB Tua Tagovailoa — who is planning to play on Thursday — is on a bit of a heater, ranking first in completion percentage and passing yards per attempt on downfield passes (10-plus air yards) through three weeks. Miami’s investment in its receiving corps is paying off, but will encounter quite a test in Cincinnati’s defense, which has allowed the lowest average target separation on downfield passes, per Next Gen Stats.

Having said all of that, the numbers worked against Miami last week, too, and look what happened. White Bengals uniforms or not, I’m doubling down on the Dolphins.

At least, it seems that way. San Francisco is 10-3-1 at home against the Rams since 2008, the best record versus one team at home for the 49ers (minimum five games played). The Rams haven’t won any of their last six regular-season meetings with San Francisco.

Los Angeles, of course, got the last laugh last season on its way to a Super Bowl LVI triumph. But that was last season. And this campaign certainly presents some new factors.

Usual suspect Jimmy Garoppolo is back as the 49ers’ starter, bringing a familiar ceiling to a team that is searching for answers after mustering just 10 points in a Sunday night loss to Denver. Los Angeles has run into its own challenges, scoring the fewest points per game and recording the fewest yards per game through three weeks in the Sean McVay era (since 2017). Matthew Stafford is again struggling with ball security, accounting for five of Los Angeles’ seven turnovers in the first three games.

Stafford threw two interceptions in each of his regular-season meetings with the 49ers a year ago and was outplayed by Garoppolo in those contests. DeMeco Ryans, in his second season as San Francisco’s defensive coordinator, dials up a defense that leads the NFL in yards allowed per play and passing yards allowed per game, and has enough experience with Stafford to make things difficult for him once again.

All of this points toward a San Francisco win. But I do not have confidence in the 49ers’ offense, not without Elijah Mitchell pacing their rushing attack.

San Francisco’s Week 3 performance was tough to watch, to say the least. Garoppolo has been better lately against the Rams, but he’s struggled in his five prime-time games since 2021, posting a passer rating of 88.6 while his 49ers have won just one of those five contests.

San Francisco will likely get more of that strange magic, but I’m not sure it will be enough to take down the Rams, the better team at this point in the season — especially with Trent Williams out due to injury.

Tom Brady owns the most head-to-head wins (3) over Patrick Mahomes of any active quarterback, and the Tampa Bay defense is playing excellent football. The Buccaneers have allowed the fewest points per game in the NFL this season (9) and rank in the top five in total defense, yards allowed per play, rushing yards allowed per game, sacks and takeaways.

That looks like the Buccaneers should be favored in this game, not the Chiefs, especially after Kansas City scored just 17 points in a surprise loss to Indianapolis last week. However, Mahomes is 5-1 in games played against the No. 1 scoring defense in his career.

There’s still reason to believe in the Bucs. Mike Evans will be back from his one-game suspension, and Todd Bowles told reporters after last week’s game that Julio Jones will probably be able to go, too. That’s great news for Brady, who has posted the lowest completion percentage on downfield passes (10-plus air yards) in his time with the Buccaneers, but also hasn’t played every game with his full complement of pass-catchers. Perhaps this is the week the Brady-led offense breaks 21 points. History suggests so, as Brady owns a 7-1 record since 2018 in games played following outings in which his team has scored fewer than 17 points (Brady’s teams averaged 32 points per game in those matchups).

Much has been made about Brady’s sideline temper tantrums, but can you blame him? His top target was Russell Gage last weekend. The return of Evans and possibly Jones should make the going easier, and if the defense can continue to find success, I believe in the G.O.A.T.

NOTE: The Bucs are practicing in Miami this week due to Hurricane Ian. There have been no changes to the plan to play Sunday night’s game in Tampa as of this writing, but the NFL is monitoring the situation.

WHERE: Lincoln Financial Field (Philadelphia)WHEN: 1 p.m. ET on Sunday | CBSSPREAD: Jaguars +6.5Surprise! The Jaguars, the team that finished with the worst record in the league the last two seasons, have made my underdogs list.

The prevailing question regarding Jacksonville after its Week 3 drubbing of the Chargers was blunt: Are the Jags … good?

Jacksonville certainly has a legitimate shot to win its division, which doesn’t look strong as we close the first month of the season. The Jags seems to playing with a sense of urgency that has caught a couple of teams sleeping in the early going. Will the Eagles make the same mistake in Week 4?

Philadelphia is 3-0 with wins over the Lions, Vikings and Commanders. Perhaps one or two of those teams will be playoff contenders by the time the season grows old, but none stand as true measuring sticks for these promising Eagles right now. On paper, neither do the Jaguars, but again, we’re spending the week wondering if we were all wrong about Doug Pederson’s squad.

Yes, that Doug Pederson, the one who led the Eagles to their first Super Bowl victory. The schedule makers did us a favor with consecutive revenge games for former prominent members of the Eagles, and this one might resonate more than Carson Wentz’s nightmare last week.

If Pederson’s Jags win, it would be the first time a coach defeated a team he led to a title since Bill Parcells’ Cowboys beat the Giants in 2006. Such coaches in the same situation are 0-4 since then, so history isn’t on Pederson’s side.

But let’s say the Jaguars are legitimately good. And let’s say the Eagles aren’t just a product of a soft early schedule. If both are true, we’re in for quite a showdown.

This will be billed as a battle between Trevor Lawrence and Jalen Hurts, but it’s also a meeting of two top-10 defenses. Jacksonville owns the edge in takeaways, while Philadelphia stands as the second-best defense in sacks.

I’m picking Jacksonville here because of how Pederson has directed his offense with Lawrence running the show. The Jaguars have scripted plenty of rollout opportunities for Lawrence, who is using his physical gifts to Jacksonville’s advantage. And after the Jaguars racked up 151 rushing yards last week, Philadelphia has plenty of reason to honor the Jacksonville run game, setting up Lawrence for more play-action opportunities.

If the Jaguars can prevent Hurts from lighting up the scoreboard, as he has in the first three weeks, they have a legitimate shot. And I might be ahead of the rest of the NFL in putting a ton of stock in Lawrence, but if he leads Jacksonville to a win this week, I won’t be alone for long.