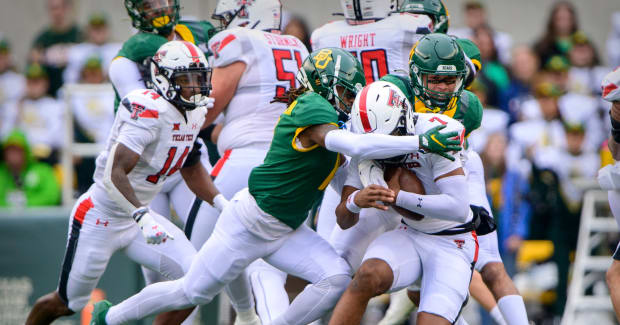 Johnson had plenty of praise for Spencer Sanders and the Cowboys’ offense.

The Baylor Bears are preparing themselves for a rematch of the 2021 Big 12 championship game against the Oklahoma State Cowboys, which they won 21-16 on a goal line stand on 4th down.

However, it is a new season and if the Bears want to repeat as Big 12 champions, getting through the Cowboys is but one of several obstacles. To do so, the Bears must stop the Oklahoma State offense, which cornerback Lorando Johnson has plenty of praise for.

Leading the way for the Cowboys is quarterback Spencer Sanders, who Johnson emphasized they must stop if the Bears want to remain undefeated in Big 12 play and continue their quest to repeating as conference champions.

“He’s a good competitor and the leader of their team,” Johnson said. “He can make plays himself, and is a good thrower and athlete.”

Sanders has had no issue torching the Cowboys’ non-conference opponents, recording 916 passing yards and 10 touchdowns with 110 rushing yards and three touchdowns through three games.

If the Bears want beat the Cowboys on Saturday, let alone repeating as Big 12 champions, slowing down their offense will be key. Should they stifle Sanders and the Cowboys then the Bears should leave with a 2-0 record in conference play and a clear path back to Arlington.

Want the latest in breaking and insider news for the Baylor Bears? Click Here

Protesters in southern Syria call for overthrow of President Assad