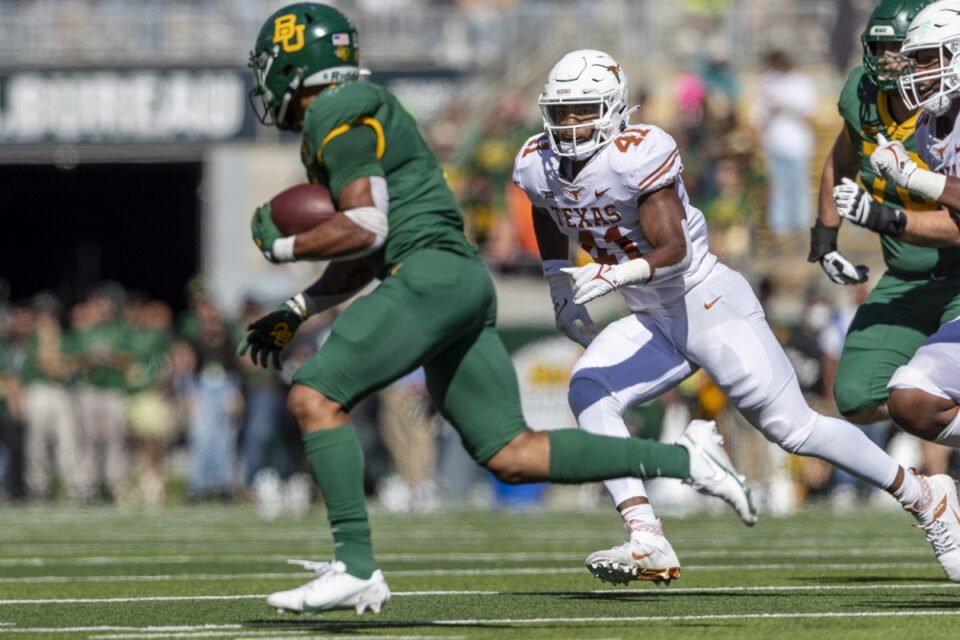 The Texas defense ranks in the bottom half of the Big 12 Conference defensive rankings except for a league leading two interceptions both going for touchdowns. However, the Longhorns held one of the top offenses in the country, Alabama, well under its averages.

Last week, Texas gave up a season-high 37 points and allowed 479 yards in the overtime loss to Texas Tech.

Junior linebacker Jaylan Ford leads the league with 38 total tackles and a conference-leading 24 solo tackles, including a three-way tie for a team-best 3.5 tackles for a loss, a sack, and a forced fumble.

Following a 2021 Big 12 Honorable Mention selection, linebacker DeMarvion Overshown 2022 is watch list candidate for the Butkus Award, Bednarik Award, Lombardi Award and Bronko Nagurski Trophy. The redshirt senior is third on the team in tackles with 29 along with 3.5 tackles for a loss, a sack and a pass deflection.

Defensive end Ovie Oghoufo leads the defensive line with 20 tackles, 3.5 tackles for a loss, a sack, and a forced fumble.

Causing havoc in the middle is rotating nose tackles Keondre Coburn (6’2” 342-pounds) and T’Vondre Sweat (6’4” 346-pounds). The seniors haven’t necessarily filled up the stat sheet combining for 19 tackles and a sack, but as you can imagine, the pair take up a lot of space in the middle for their teammates to attack the ball. The same can be said for senior defensive tackle Moro Ojomo, who missed last week’s game versus Texas Tech, but the staff is optimistic for his return to the field against the Mountaineers.

Cornerback D’Shawn Jamison has a team-leading three pass breakups and an interception for a touchdown and has eight solo tackles and a sack on the season. The fifth-year senior is also a dangerous returner as a three-time Paul Hornung Award preseason watch list selection.

Safety Anthony Cook is second on the team in tackles with 38 and a pass breakup while free safety Jerrin Thompson sits fourth with 29 tackles.