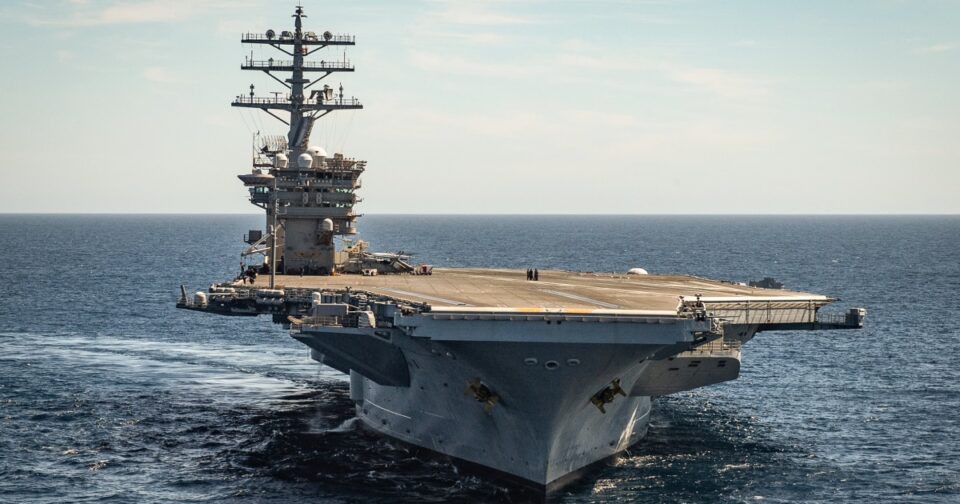 The Navy has not confirmed whether the illnesses are directly related to the tainted drinking water. But Cmdr. Sean Robertson, a spokesperson for the U.S. Third Fleet, said the sailors reported “health concerns” that “could be associated” with ingesting the type of jet propellant that leaked into the carrier’s potable water system weeks ago.

One of the sailors still has symptoms of acid reflux, Robertson said. The other four have been medically cleared, but the spokesperson did not elaborate on the nature or severity of their health issues, or when they first reported their concerns.

The Navy said it suspected that the water might be contaminated on Sept. 16, and traces of jet propellant-5 were found in one of the carrier’s 26 potable water tanks this week.

It’s unclear how much fuel was discovered. Robertson said that “any amount of contaminants detected in the ship’s potable water system is unacceptable.”

The illnesses were first reported by the Navy Times.

This is not the first time military jet fuel has seeped into drinking water. Some 6,000 people said they were poisoned by drinking water that was contaminated by leaks from the Red Hill bulk fuel storage facility, near Pearl Harbor, last year.

Four ailing military families, formerly based in Hawaii, filed a federal lawsuit against the U.S. government this month.

Federal and state health officials are still trying to study the effects of such a widespread leak, which Dr. Diana Felton, a toxicologist with the Hawaii Department of Health, called “unprecedented.”

Hawaii’s Health Department and the U.S. Centers for Disease Control and Prevention conducted an initial survey this year of more than 2,200 people affected by that leak.

Other participants said they had difficulty concentrating, and many reported that symptoms lasted longer than a month.

The CDC said many factors determine whether a person exposed to jet propellant-5 will be harmed. That includes the duration and dose of the exposure, and how the person was exposed — whether from inhalation, ingestion or contact with skin.

The agency said exposure could cause damage to the liver, decreased immune response, impaired hearing and impaired performance on neurological function tests.

The USS Nimitz is in port in San Diego, where its water system is undergoing testing and flushing.

Officials said they had isolated the contaminated tank, as well as three other nearby tanks as a precaution. The aircraft has been getting fresh water from the city’s water supply since Sept. 17, when officials began treating the water system.

The Navy said that the water on board “remains safe for use” and that bottled water was also available.

Robertson said USS Nimitz crew members are encouraged to immediately report any illness or injury that could be caused by exposure to contaminated water.

“The health and well-being of all of our Sailors is our top priority,” Robertson said.

Melissa Chan is a reporter for NBC News Digital with a focus on gun violence.